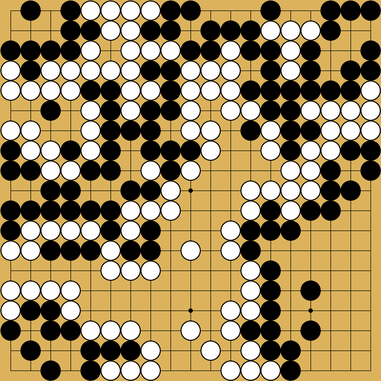 
I had a dead group in the upper right, which looked like it had some aji associated with it that I might be able to get some good endgame from. But I couldn’t really figure out if it really did, how much, and how best to use it.

In the game, my opponent played inside to remove any of the aji. In that sense, I guess I did get 2 points back for it, but I can’t really tell if that was all I should get or if I can actually get more if I play eg Q19 (before black’s R18).

Looking back, the initial invasion (at move 166) itself was probably not the right choice anyway. I knew it was difficult, but thought I was behind and needed to try something. However, I assume the failed invasion lost me points overall, and as the final score was so close, maybe I was actually ahead at that point and should have continued with normal endgame. (I didn’t feel my endgame play in the actual game was very good, so maybe I threw away a winning position anyway, eg S11 and E19 are just awful moves.)