Error message when issuing a challenge

I get the following message when I try to create a new game via “Challenge User.”

Any ideas what is up? I am absolutely sure the username I am issuing a challenge to exists

Hmm, which user? (You can PM me if you don’t want that to be public)

P.S. how does “automatic komi” work?

Oh, I should say: I have two accounts cdunc123, and cduncan.

I’m doing this because I am teaching a college class go and we are using online-go for a class tournament. I was trying out the process of inviting others to games, so I could explain. Hence, my two accounts.

Hmmm, just tried it again and it seemed to work. But when I played my first stone as cdunc123, it got stuck on “Submitting…” The stone never showed up for the white player (cduncan) and so white couldn’t take his turn. “Unable to authenticate” flashed briefly on the screen.

What browser / os are you using?

Oh are you attempting to login with both accounts from the same browser? That wont work out so well and you’ll get some wonky errors, probably like you’ve been seeing.

To login to two accounts simultaneously on the same computer do one of the following:

Ah, right! That was indeed it. Many thanks (I used Chrome and Firefox).

On another topic (since I asked about it above), one more question if you don’t mind:

What does “automatic komi” do? Does it set komi to 7.5 on Chinese rules and 6.5 on Japanese rules? (My understanding is that those values are the standard values these days.)

Yep, it sets it appropriately per rule type, board size, and handicap (all three factors can have an effect on the komi)

Is there a description somewhere of the automatic komi the website uses for the various permutations of rule sets, handicaps, board sizes?

And thanks too for all the help! Much appreciated!

Oh, one more question. Is there a userguide or help page or FAQ page I might point my students to, as they learn to navigate OGS (Online-Go.com)?

You can find a lot of useful information on the left-side menu in the very small letters on the bottom.

I’ll add a screenshot, so you know where to look! You can find a link to the F.A.Q. section of this forum (It’s not 100% complete yet though, but some useful stuff inside.) plus a link to the Rules Matrix. 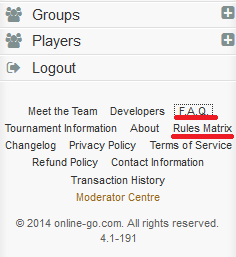 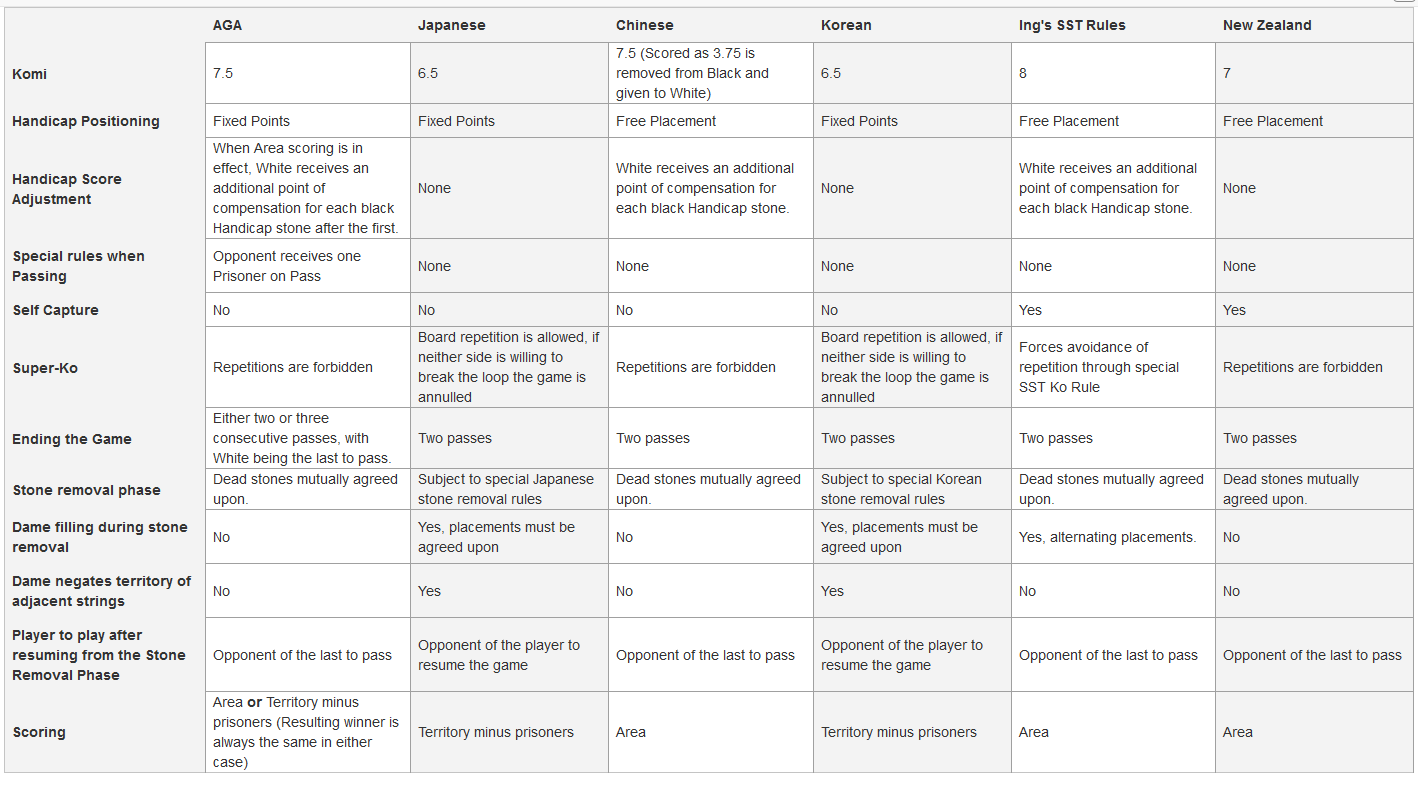 Is there a description somewhere of the automatic komi the website uses for the various permutations of rule sets, handicaps, board sizes?

See above for franzisas post on komi for different rules, then for handicaps on smaller boards we use teh “Old Japanese Recommendation” from http://senseis.xmp.net/?HandicapForSmallerBoardSizes to determine the number of stones and the komi used

Many thanks for the help, anoek and franzisa!!

Very interesting to me too. Like I said in my previous post, it always struck me as implausible that komi should be independent of board size. So I found http://senseis.xmp.net/?HandicapForSmallerBoardSizes to be very interesting.