I had a conversation with a friend of mine who is a chess player and he asked me what rank i am in go. I said I am 14 kyu and he ofcourse had no clue how good or bad that is. So I looked it up and according to this page Go ranks and ratings. 14 kyu is about 600 ELO. But 600 ELO is quite bad in chess while 14 kyu is definitely not that bad, so i feel like it is quite inaccurate. Or am I wrong ?

you are in luck. ogs actually uses an elo based ranking system. you can get the numbers on your profile page. 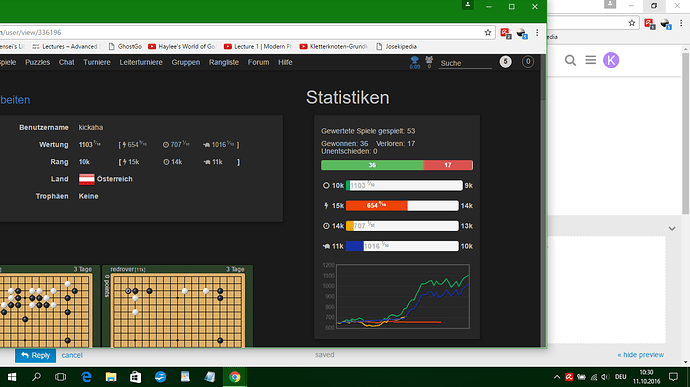 as you can see i am drifting along the lines of 1000 elo points, which equals 11k on ogs. my blitz rank is 650 elo points at 15k. i have no idea how this compares to a chess player of the same rating, but it seems at least somewhat comparable.

as far as 14k not being that bad… well lets just say, there is lots of room for improvement. same goes for 10k

. maybe you feel that getting to 600 elo was easier for you in chess than it was in go? i would think that is a reasonable assumption.

You cannot compare OGS and Chess (which system?) ELO numbers directly, they are meaningless.

I actually analyzed EGF and FIDE ratings about 5 months ago on this post in a different forum. This is the comparison chart if you consider percentiles of the two populations: 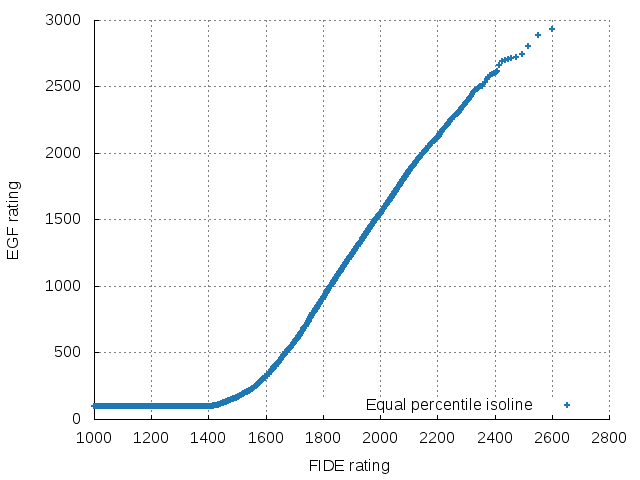 14 kyu EGF corresponds to ~700 EGF ELO and it means that you are better than ~32% of the EGF population. You need a 1640 FIDE rating in order to be in the same conditions.

Note that population dynamics affect these numbers significantly (especially how likely you think it is for a beginner to obtain a rating in one of these systems). I would love to do a similar analysis using online servers, but I don’t know of any chess server with this data available.

if i am interpreting this correctly, which is dubitable, the graph tells me that there are more go beginners in the sample group than there are chess beginners or, in other words, that the average strenght of the chess sample is higher. is it correct to say that, if there were identical sets the ranks would be comparable?

also: is it wrong to assume, that an elo rating of 1000 places a player an equal distance from top players in both systems, even though - as shown - the player would be in different percentiles?

About the first question: I don’t know if that is true, hence the caveat I added. If you suspect that go beginners are more likely to be rated by EGF than chess beginners are to be rated by FIDE, then you need to be careful as the two populations are not comparable. That’s why I would like to do this analysis with online servers, as I believe they are less likely to suffer from this issue.
The big horizontal line you see at the beginning is due to a big group of players with exactly 100 ELO points in EGF. These players have played games, so I think that 100 is simply the worst rating possible in EGF (and losing games won’t make it go any lower).

About the second question: you need to define “distance” properly, and this is the big issue. Percentiles are the one I think make the most sense, as comparing the (relative) number of players you can beat in each of the games is a concept easy to understand.
However, there are others, e.g., probability of beating the world’s best player. I don’t know if EGF and FIDE ELO calculations are the same (they probably aren’t, as there are a couple of parameters to be chosen when specifying an ELO system). If they were defined the same way, then two players 1000 points from the best player would imply that they have the same chance of beating that player.

thank you for the elaborate answer!