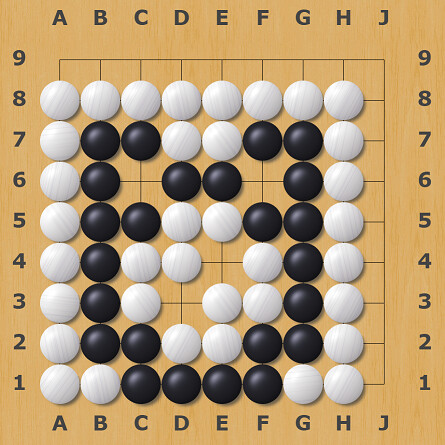 Live with all false eyes by connecting up in a loop! Has anyone had a position like this or used the idea in a game?

Sensei's Library, page: Two-Headed Dragon, keywords: Life & Death. SL is a large WikiWikiWeb about the game of Go (Baduk, Weiqi). It's a collaboration and community site. Everyone can add comments or edit pages.

Yes, Kim Jiseok 9p did once. Well done to be in such esteemed company!

Somewhere buried on a hard-drive I have a magnificent tsumego which ends with a two-headed dragon in a pretty surprising way. Perhaps someone else has seen this tsumego?

Could you please help me understand why this is a false eye? 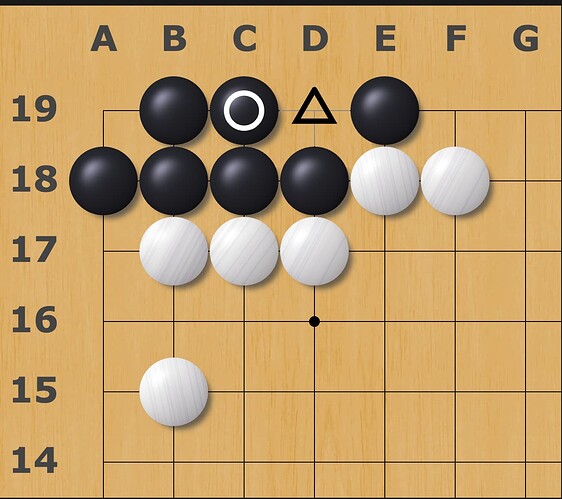 Because it’s E19’s only eye, so in general black would have to fill it at some point. (But in some cases black might be able to live due to a possible ko at D19.)

Two stones are only considered part of the same chain if they are connected. Diagonals don’t count. So, the black stone at E19 is not connected to the large chain of 6 black stones.

Eventually white is going to play at F19. Then the black stone at E19 will have only one liberty, at D19. At this point, either white captures the stone by taking its last liberty at D19, or black saves the stone by connecting it by playing at D19.

No matter whether white captures de E19 stone or black connects at D19, in both cases the “eye” at D19 is gone.

Ohh thanks a lot for this explanation. Really helped! Didn’t strike that E19 was actually a diagonal, hence not part of the longer chain.