The OGS Joseki Explorer has been updated to try to be as responsive as possible.

I think that most of the time, you should now experience little or no delay in exploring Joseki with OJE.

Let me know if anything seems broken as a result. Or if you like it

I think I know another example where using the back and forward keys/buttons gets messed up.

Suppose someone links you to a position in OJE, say https://online-go.com/joseki/20272 and you now go back a few moves (3 or so) with the arrow key, and then forward again. It starts messing up the sequences pretty reliably for me.

It happens with the buttons too on the webpage, not just the arrow keys.

Yeah - it’s borked in that way I need to fix it.

OK - it’s not as borked as I thought.

It is a bit unintuitive, I’ll give you that

What’s happening is that IF you have played some stones, then gone backwards, then press the forwards arrow, it takes you back through the stones you played.

BUT if you haven’t already played some moves, then gone backwards, the forwards arrow choses the variation with the lowest number - IE the “best” variation.

Arriving at a position by a link is a bit confusing, because you can go backwards from there without having first played those stones.

When you start going forwards again, OJE has no record of played stones (because you haven’t played any) so it takes you through the best variation from where you are.

I will have a look at pretending you played the stones you go backwards through, but it’s a bit hair-raising…

Edit: Hah, I think I fixed it, fix submitted.

What I was finding though was that while it probably is just playing the ‘best’ move variations, it tends to mix up which colour plays where and so the sequences stop being joseki, especially if you’ve been linked a position.

So you end up with stones in random looking spots and you can’t fix it by going back or forwards, you have to refresh or reset the position.

It’s like sometimes it takes a cross between two joseki positions or something. Can you see similar happening or? Egs 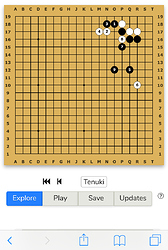 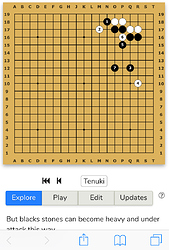 Can you tell me an exact sequence to reproduce it?

Let me find another joseki, that doesn’t involve pressing the back arrow ten times.

It is quite likely that it’s to do with as you said, when go back to branch point of a variation where there is ‘better’ option than the one you went with/were linked to.

I think from this position though, it gets worse (more scrambled) the further you go back. 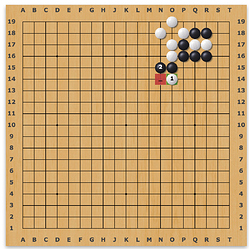 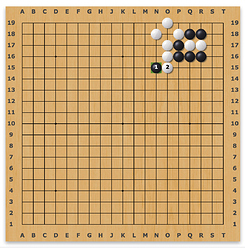 This kind of thing was happening to me a lot while trying to update info/sequences in the joseki explorer from Michael Redmonds new videos.

The fix I found yesterday is in now (thanks anoek!).

I think it helps these cases - can you try it out?

Might not be perfect yet, but should be improved…

For me it doesn’t seem to have, especially with the second joseki I’ve linked.

I’ve tried pressing shift+refresh on chrome on mac, and command+shift+R to see if it helped but it didn’t.

That was a pretty quick turnaround time for the fix though

I’ll keep poking around then…

I think I see another problem - going backwards from a link was one, but pressing the arrow again while the spinner is still spinning seems to be a problem (even though in theory that’s already defended against!)

Does that seem right to you - is it when you go back fast, and maybe beat the redisplay of the node you back clicked to with the next click?

Yeah I think that’s right. It’s not a problem if I go back through a bit slower.

It is definitely a good bit better. I think you can tell that it is something to do with it loading the node and a bunch of text and variation labels, because up to about this point 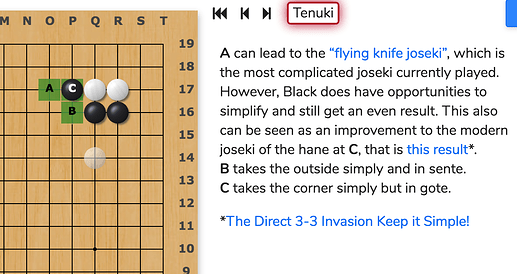 while starting from joseki 23141193 you can go back through it at a pretty decent pace.

Were you still able to get it out of sync? (I don’t want to try speeding it up till I know it’s solid)

Actually I’m not sure - the visuals go a bit odd, but if you know the variation you can get it back on track which is interesting.

For instance if you get it to this point 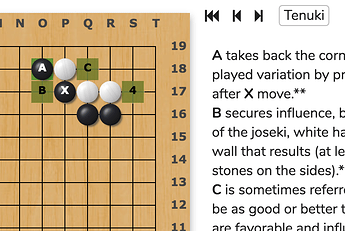 It doesn’t work going back any further though. You lose options to explore, and are better off refreshing I think.

So to summarize, it no longer gets out of sync, but sometimes the forward arrow stops working?

Well it depends on what you mean by out or sync.

Before it used to just play random looking moves (from other sequences?) when you went backward and pressed the forward arrow.

Now what’s happening when you go back far enough (fast-ish enough) is that at first instance you lose functionality of the forward arrow key, but if you go back further you can lose all variations altogether, with nothing shown when you reach the empty board. Then you have to refresh to get things working again, although sometimes you can get it to come back to some main variations.

Thanks for letting me know, I’ll have to dig deeper…

The fact that OGSJ can’t handle mirrored positions is also a drawback.