I found this interesting too:

I love to collect words. Making word lists can help to find the voice of my story, dig into the emotion of a scene, or create variety. One of my on-going word collections is of colors. I love to st…

Ironically there are two magenta swatches and they aren’t the same colour! 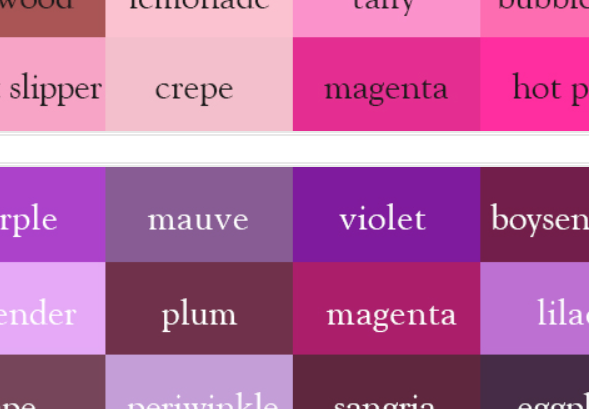 a HTML color picker based on xkcd's color survey 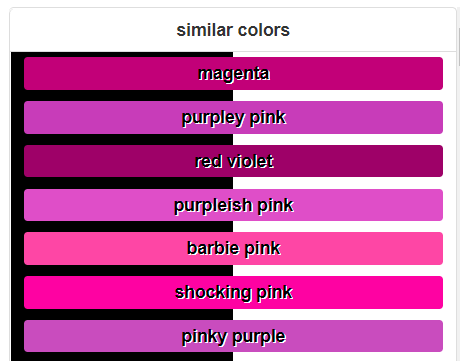 Black and white are SHADES.

I don’t see how they can even remotely be considered “shades”. Shades are a refinement of a color. Like dark green is a “shade” of green.

And I’ve never seen white sunglasses, so that can’t be what you are talking about.

Oh right! Doh, you are clever, I am dumb.

Black, white, and grey are called “shades” distinctly from other colours because they are achromatic (without hue).

That sounds like a plausible technical definition, though I couldn’t quickly find a reference to support it.

This is the typical definition of shade (in this context):

a colour, especially with regard to how light or dark it is or as distinguished from one nearly like it.

Definition, Synonyms, Translations of achromatic color by The Free Dictionary

…or were you meaning a reference for why achromatic colours are called shades?

I think it’s because dark green and light green are shades of “green hue” but black, white, and grey are shades of “no hue” so they’re simply called “shades”.

But also aren’t “shades” of a particular colour achieved by adding black or white to that colour? No idea if that’s pertinent!

Btw if you add enough black to green, I think you get black so black is technically a shade of green

aren’t “shades” of a particular colour achieved by adding black or white to that colour?

In the case of the “shades of green” example, you can add any other colour to have a different shade. Often painters use “warmer” or “cooler” shades of a colour by adding other warm or cool hues.

More generally, you can modify a colour by changing it in three dimensions: its hue, its saturation and its lightness.
Usually you don’t do that adding pure black or white.

In Italian we have two words:

I think you can translate both of them as shade in this context, but as an amateur painter I strongly suggest not to use black and white to achieve shadows and highlights. Please don’t do that!

If you don’t trust me, Google it! There’s plenty of tutorials and articles about that.

I bow to your expertise!

I’m a little bit disappointed that nobody has brought up the physics aspect of it yet.

It’s not really a physics problem. Colour is a perceptual thing (and even a linguistic one - it’s been shown that what colours you perceive - what is the same colour or different - depends on what words you have for colours!).

Physics says these tennis balls are the same colour: 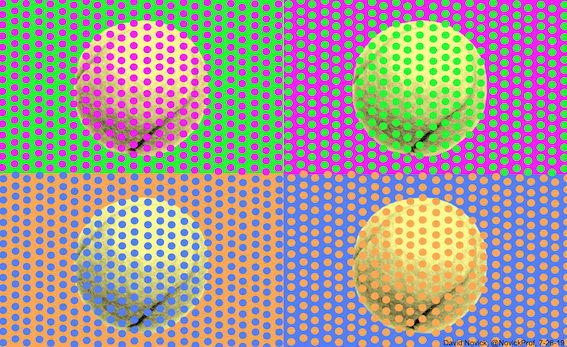 … and the little girl’s face is grey… 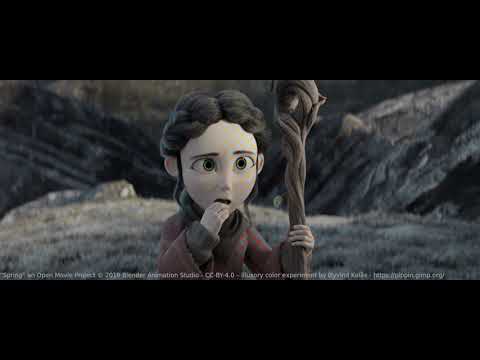 Huh? What other colour would the face be? (Apart from that strange orange grid on it.)

It’s not really a physics problem. Colour is a perceptual thing

What we perceive is a spectrum of electromagnetic radiation. We can talk a lot about shades and whatever, but we can also talk about wavelength and intensity. I guess which approach is more useful depends on the context.