While these are intended as ways to keep inactive players from spoiling the integrity of ladders and tournaments, even with the vacation system, inevitably active players run into these issues as well.

I’m proposing a simple three-strikes system:
If you time out in a ladder game, you lose that game and get a warning (via notifications) explaining the following
If you lose two more ladder games via timeout, you’ll be booted from the ladder.

Also, when you lose a ladder game via timeout, give a 1 day pause in your other games in that ladder as a grace period. This way, if you have three games that all time out at nearly the same time, you aren’t just instantly booted. You’ll have a small grace period.

For tournaments with multiple rounds, you could do something similar. One timeout in one round doesn’t have to remove you from the whole tournament, but three timeouts in one round probably should.

My hope would be that this system would still remove inactive players from tournaments and ladders while making it very hard for an active player to lose progress and get booted due to leaving for two days at the wrong time.

If people notice you lost a game by time, they might challenge you hoping to get a loss by time. As the ladder already has restrictions on how many challenges you can receive at once, this doesn’t seem like a major issue. You’ll be removed from the ladder after three losses and no further exploitation will be possible.

If someone times out in the last game of one round, they would still be around in the next round to potentially time out all their games if they are inactive. This seems unlikely as the window for this to happen is rather specific. If a player goes inactive between two rounds of a tournament, they are already losing all the games in the next round, so the problem already exists. This doesn’t seem like a big detriment.

If you’re out of vacation time and running out of time in one ladder game and ready to resign another, you could intentionally lose the one game by time to get an extra day of time in the other. This seems extremely unlikely to be a common issue (or come up at all ever) but it’s possible, so I figure i should mention it.

Anyway that’s my idea, the basic three-strike system rather than our current 1-strike system.
Hope you like it
Hope it gets implemented

[edit: left out a section or two of my conclusions; also spelling]

Strongly disagree with your whole proposal.

You’ll have a small grace period.

OGS already has a crazily generous vacation system. I respectfully submit that if someone is timing out then the real issue is their time management and perhaps over commiting to games, tournaments or ladders that they aren’t really suited to play in.

This proposal is akin to giving more money to someone who can’t manage money. Adding layers of grace and delay to an already generous system will simply smother it.

Active players who understand the time settings will quite rightly ask, ‘What is the significance of these time settings when my opponent has multiple options for ignoring them?’

Timing out in a Ladder

If you time out in a ladder game you will automatically be removed from the ladder but any games you are playing but have not timed out in will continue. If you wish to rejoin the ladder you must do so from the bottom.

However, a reprieve is offered. If, after rejoining the ladder, you win a challenge you were playing previously then you will jump up to the new place.

There are your second and third chances. (And 4th and 5th if you are lucky)

These chances only exist if you had multiple ladder games going. If you had only one, you are simply booted.

If someone is timing out constantly due to utter mismanagement, they will still end up being removed from tournaments or ladders under my system.

However, under the current system, you could be in a ladder for a decade and the first time you time out, after years of consistency, you’re just booted. This doesn’t make sense. It’s simply not distinguishing between active and inactive players.

If you’re an active player, and you’re going to show up to the next ladder game and the next round of a tournament, a loss by time time should simply count as a loss. It’s only for completely inactive players that we would want them to be removed from a ladder or tournament. 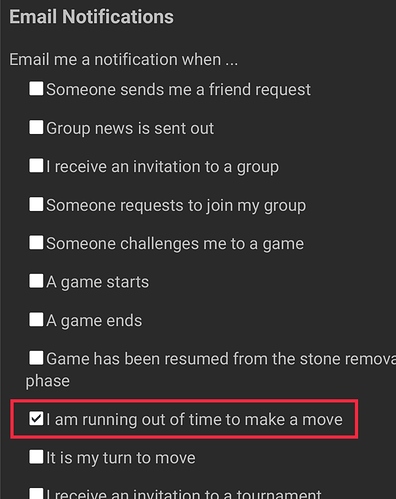 If for some reason I’m timing out because I can’t connect to the internet, I won’t receive the email either, right?

I’m not taking a side, just pointing this out.

It would be nice, if instead of timing out, the vacation would start automatically, but that’s another issue somewhere in the forum.

If we want a more forgiving system for ladder timeouts, I think I can provide a better proposal for handling them.

Proposal: Maintain the current practice of removing players from the ladder after a ladder timeout BUT if they rejoin within a month, allow them to slot in at a position just sufficient to challenge their old position. This would put rejoining players only one win away from their old position.

If (n) is the ladder position you held just before timing out then your new position (m) would be 5n/3(rounded down) or n+10, whichever is greater.

The same principle could be applied to people who choose to drop out of the ladder manually so that they don’t need to fabricate a TO. This would allow players to take a break from the relentless pressure of the ladder system without forfeiting all their progress.

I agree with the sentiment that we are already crazily generous here.

If you drop out of a ladder due to time out, climb up again, and be more careful this time.

It really isn’t that hard.

At the moment, by far the most common report moderators have to deal with is “this person timed out on me”. We don’t need anything to encourage more timing out.

“It really isn’t that hard” is kinda of a huge understatement. It can take over a year to climb back up the ladder.
The whole purpose of the current system is to deal with players that have become inactive. It is not to punish an active player for timing out. That is not the goal.
All these things like vacation and notifications are in place to avoid active players getting hit by this timeout punishment, and yet active players still get hit by it.
I’m just proposing changes that would make it much much harder for an active player to get an unwanted timeout and be unduly punished.

I dunno - I’m only DDK and I can get back up over half way, and pretty much “as high as I can go” within a few games. Which on correspondence-time is not long.

I guess if you lost a top-10 position that would hurt a lot.

However, the purpose of the current system is not only to deal with players becoming in active - it is to disuade players from timing out also.

Time out is not good. Everyone hates it. Everyone complains about it. Please don’t do it.

Right now if I look through my active games tab, there are a few where i have between 24 and 30 hours to make a move, but it’s not my turn. If I was away for a day or didn’t think to log in, those could easily turn into losses by time if I’m not careful.

It wouldn’t be that I was maliciously running out of time or wanted to prolongue my position in a league or something like that. I just simply used up my time and lost. I didn’t abandon the game or decide to not play another move intentionally.

I imagine a lot of players could describe their games tab as such. Should we all go on vacation every time we might be gone for a day? I don’t think so. I figure a small system to mitigate those short term time worries would be fine, so you don’t come back having gotten kicked from a tournament and a league cause your opponents played when you were away rather than when you were there.

One idea I had was an option to turn on vacation when you are like 5 minutes away from losing by time, but the downside is every inactive player ever delays everything 30 days, so that’s not great. I think a short-term answer like the one i proposed is the solution.

Right now if I look through my active games tab, there are a few where i have between 24 and 30 hours to make a move, but it’s not my turn.

You know, you can turn on vacation

I don’t think you are taking the “victims” of a timeout into consideration here. Nobody likes getting the notification “X wins on timeout”.

Set up your email notifications and don’t time out!

Honestly, it is the easiest thing ever to not time out.
Pay attention to the number of games and time settings you accept.
If you are getting into situation where there is only 24 hours left to make a move and you often cannot get on for a few days at a time it was INSANELY rude for you to have accepted that game and wasted so much of the other person’s time.

I guess you’ve never had an error where a tournament you’re in accidentally sets up double or triple the amount of games you’re supposed to play.

Or a sitewide tournament starts another round you weren’t expecting, since it can be fairly random when the last game in the round of a correspondence tournament ends.

Then you have way more games on your hands than you were expecting and you’ve to play that many moves nearly every day… on top of the games you were managing.

Insanely rude seems a bit of a stretch.

Obviously site bugs that enroll you in games you did not agree to is a seperate issue… I would not think that it would require stating that bugs cause unintended circumstances.

Outside of site bugs… If you have trouble managing your commitments to games, take on less.

Otherwise, no not a stretch. If you make the choice to occupy months of my time I hope you would think about that commitment and approach it realistically.

I’ve had this situation where a tournament sets up like 15 games in a day. It is difficult, but I would argue that this is a design flaw in the tournament, rather than a flaw in the timeout system.

It’s up to users to (a) avoid overwhelming tournaments or (b) manage their games appropriately (play/vacation/pause/resign). If they end up timing out, perhaps it is better for everyone that they are removed from the tournament.