First, thanks for OGS! It’s a great server with amazing capabilities and a good atmosphere.

Background: I’d like to get stronger, and one way I do that is by playing stronger opponents. However, sometimes I look at the pivotal opportunity in a game and I simply don’t understand it. For example: 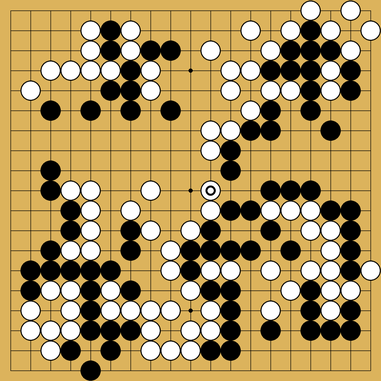 has a pivotal opportunity around Move 135 around J15. Neither me, nor my opponent play it, and eventually the opportunity is missed by both of us.

I’m looking at this in automated review e.g.

having played out the suggested branch, and I still don’t understand the point I’m missing that the automated review is drawing attention toward.

Request: Given a pivotal moment in the game (where score oscillates wildly between each player as they don’t see an opportunity) would it be possible to generate a rollout for each branch? By this, I mean the following:

I appreciate this is a pretty big feature request, but I think this would be an enormous help for individual study.

…OK, now I write this comment, after 20 minutes of clicking, I see the weakness: a cut which becomes a ko leaves Black in tears. I do think there’s a way to make “there’s something neither of you understood” to “jump out” in the review, though.

I do think there’s a way to make “there’s something neither of you understood” to “jump out” in the review, though.

I fear I disagree. You can basically do that manually with life analysis. (Not sure, may be a supporter only feature.) So I often follow the AI lines for many moves and still don’t understand. Sometimes I follow several branches with mixed results. Sometimes it suddenly clicks and I do understand, sometimes I’m still lost and simply accept the AI sees far to many more things than myself, so I simply have no chance. I’ve learned to accept that. Yes, objectlvely that might have been the best move, but I shouldn’t have played it because I wouldn’t know what to do next anyway.

I don’t think there are easy shortcuts to these sometimes painful, sometimes succesful attempts of learning. Happy to be proven wrong, but I’m sure just one or two longer suggested variants wouldn’t make much of a difference to me.

You could try using “estimate score” to understand the final results of the suggestions a little better (ie play the suggested move for each color on their turn and compare how the dots on the board change).

As you can see from estimate score, White playing that cut versus Black protecting it is about big territory on top and Black’s H17-J17 stones being captured. 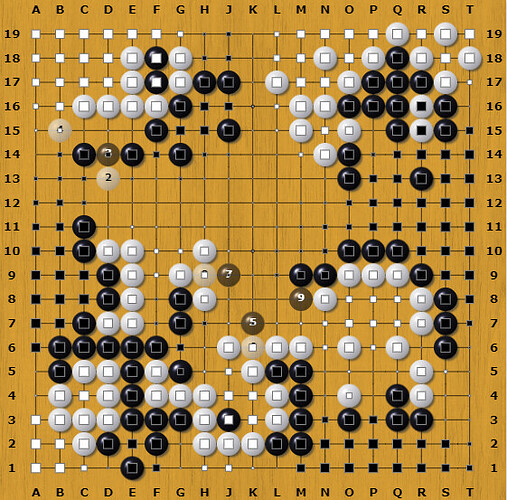 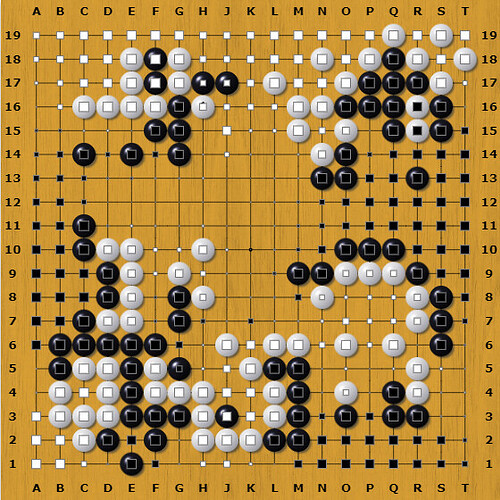 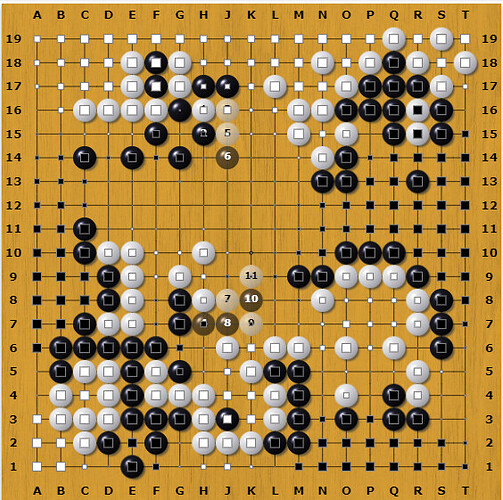 I think this is much more to-the-point and understandable than seeing an end-state for a hypothetical messy game AI would come up with after a move. Those games usually have huge exchanges at various points, making these local moves lose most of their meaning in the end.

Having access to some full rollout by AI from a position looks interesting to me, at least to see if sometimes it could be useful. I imagine that some local fights may be postponed by the AI but finally at some stage later be resolved and having access to it be a nice feature.

I still doubt like others about the usefulness considering the way AI drive its games, with complicated tenukis, sacrifices and so on. But there is fun at least to see how it would handle our moves in the long term even if it proves to be most of the time useless.
Last I’m afraid it can use a lot of resources on the server side maybe?

It makes sense to me that the “estimate score”/“life analysis” feature could be used as a workaround here. Thanks!

In which case, I would perhaps request a feature that does something like is done above with the screenshots from snakessss: “Game-changing move” showing the score estimate boards from each branch? Perhaps 6-10 moves into each branch?

Thank you for your help, and for OGS!

The problem with trying to get a computer generated full variation to a terminal state you will understand is it will involve playing lots of bad moves. Say you should play a cut because it can kill a group after some fight. The opponent’s best response if they realise they will die, which the superstrong AI will, is not to play to the death and keep digging the hole of defeat, but make some compromise or trade to make the best of a bad job. This could involve all sorts of high level probes and aji etc.

What you need is to interactively explore the continuation with questions like “ok Mr prescient bot, you want to play here to sacrifice this group now, but I don’t see why I need to sacrifice it so what if I try to save it like this, show me the continuation to kill it”. And then 4 moves later you do the same, and then again, and then 20 moves later you finally see the kill and understand. This variation is different for different levels of players, because what is obviously not working vs needs playing out to explain is different for a 25k vs a 10k vs a 1d vs a 5d.