Title. Would love to see a dark mode for the website.

We do have a dark mode available. To enable the dark theme, click on your avatar icon in the top right corner: 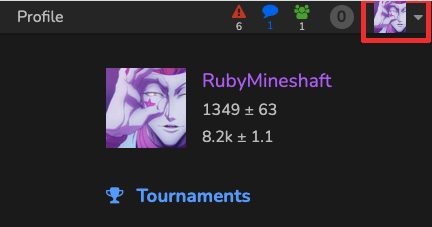 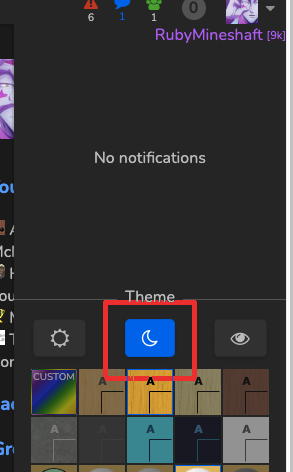 The other theme available is a high contrast mode for colorblindness. Let us know if you have any other questions!

The colorblind one on the right is also dark theme and many of us full sighted users actually prefer it to the other two colour schemes, so do give it a try (the one with the eye) and let us know what you think

Is there any reason why it’s not just the dark theme? I, too, think it’s a nice.

Is there any reason why it’s not just the dark theme?

Adding a new option is easy, taking away an old one requires community consultation. There could well be people that hate the orange and blue colour scheme.

However, this is not the first time the idea of just having the main theme colour blindness compatible by default has been suggested. We’ll see if it gains any legs.

this is not the first time the idea of just having the main theme colour blindness compatible by default has been suggested.

might have been me tbh. Accessibility by default is always a good thing! (Although I don’t think default dark is even that inaccessible unless you’re specifically red-green colorblind)

Yeah I think you, me, and GaJ are supportive of the idea… But nobody has yet attempted to formalise the matter and receive some wider community input.

I too believe that as far as reasonably possible, accessibility (thank you, I was trying to remember that word lol) by design is ideal.

The accessoble theme did not just replace the pre-existing dark theme because there are colour choices that make less “normal colour logic” sense in the accessible them - for example, blue for presence rather than green.

At the time the accessible theme was being done, it appeared that more cases might emerge like that.

By keeping a separate accessible theme we retained the ease to make more changes change away from “logical colour” towards “accessible colour” without having to make all dark theme users happy.

In the time since that prototype went live, everyone has pretty much agreed that the normal themes ought to be accessible in themselves, and if more energy was to go into accessibility, I imagine that’s the direction we’d choose (and notably some small accessibility improvements were made in at least the dark theme towards the end of the period when we were all interested in this topic).

In the mean time, we pretty much solved the urgent accessibility problems that were being complained about and attention has move on from this topic.