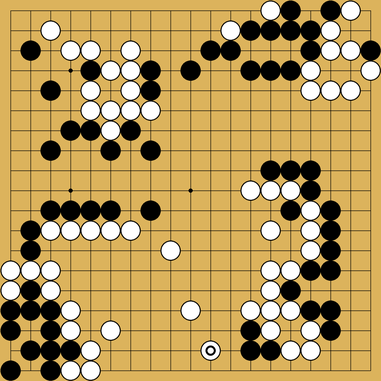 I have just read your game. Regarding the “Red Eye Problem”, it is okay to let your opponent have a seemingly large territory as long as you are the one steering your opponent’s moves. For example in this game, Black was dragged behind by the ko in the bottom-left corner (tenuki at 93 was incorrect), because he needed an extra move to live. White eventually used this opportunity to build his moyo. Also I don’t think 135 is the best move in the ko at bottom-right.

Sorry that I don’t have much time to review this game, but I will surely look at it later!

Just took a quick look at the last part of the game as well and both you, as well as your opponent, showed a severe lack of understanding the idea of a Ko fight.

When white played 102 and black answered with 103, then white should take back the lower left corner Ko. Black must find a big threat, otherwise White connects at c1 and wins the game by killing the lower left black group. Instead, white was clueless and kept wasting valuable Ko-threats by continuing to play in the upper left, before coming back to taking a1 in move 114.

Black instead wasted a Ko-threat right after that with 115 at t17 instead of t16. With t17, the black stones die immediately and there are no follow-up threats. With t16 white answers by placing the black stones into atari, but they are still there and black can play there again for another Ko threat.

Next ko-mistake by white is at move 122: white answers black’s threat to kill 3 white stones and slightly reduce white’s territory. The ko that is currently at stake, however, is about 9 black stones, so easily worth 20+ points. White should have simply ignored black’s threat here and take a net profit of some 15 points by killing the lower left. Similarly, white 124 is no threat at all, so black correctly ignored it to ensure life and finish the ko.

The next ko is enlarged by black at move 133, which basically says “Let us play this ko, but if you (white) lose it, then I (black) will do significant damage to your lower side territory”. White opened up the ko with move 134, and therefore, at move 135 black’s duty is to find a threat that threatens as much damage as he could do at the bottom.

Your move at o2 shows that you have not understood this situation at all. It allowed white to simply close the ko, thereby cutting off your stones and leaving them surrounded by white strength, ready to be slaughtered. To make things worse black adds one more stone to the dead ones, which white happily accepts.

Considering your “red eye problem”, there is none really in this game. If you understand the ko situation at the bottom right, then you should realize, that all possible reduction moves are sufficient threats. You can either destroy white at the bottom (right-side of it at least), which is easily enough to win the game - but that requires winning the ko. But you could just as easily lose the ko to white, but as compensation gain two moves somewhere else to reduce white’s large territory. Consider something like black getting h8/h7, or c7/d7, or e4/e3. Any of these would be a reduction of white’s territory, after which it looks not so scary anymore.

Summary: I suggest you read up a little bit on ko fights and try to be more aware of their importance in your games.