First games - end result is a mystery to me

This was my third game. 5x5 board against the computer.
Black went first. White passed, black passed, end of game.
White won by 26.
I get black has no territory as the single white stone makes it in dispute but why does white capture all the territory?

I do not understand because we both passed the moves stopped. What happened here?: 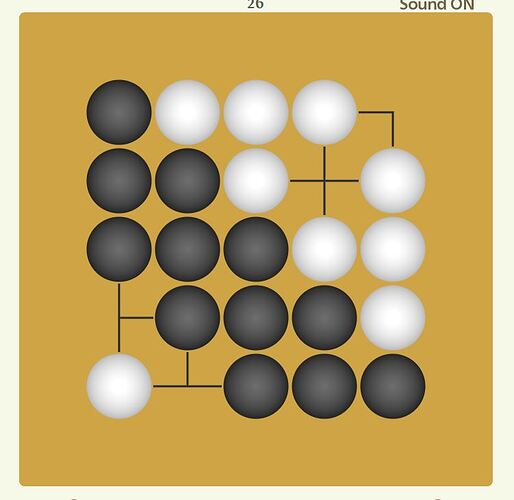 Black cannot move anymore: if Black plays A then White captures with B and vice-versa. 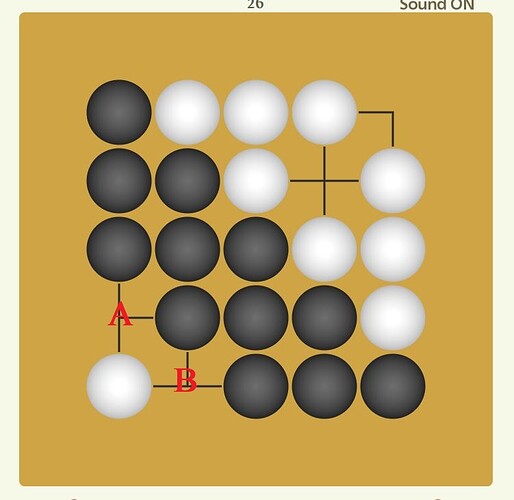 If black had the stone at A1 instead white, then black would also have a living group with 2 points of territory in those eyes

Black cannot move anymore: if Black plays A then White captures with B and vice-versa.

For clarity, black CAN move, but it’s futile and doesn’t stop black being dead. Black A is a legal move, but white could just ignore it (as black still can’t live playing again) or capture all black’s stones.

Welcome to the wonderful world of go (and to our forum)!

When in doubt in a situation like this, you have to think for each side.
What can black do?
What can white do?

For black it’s easy. He can play A or B but then white eats all. Not interesting.

For white it’s more interesting. White can capture the big black group of stones in a few moves by sacificing 2 and then 1 stone. Black cannot avoid it, he needs to capture each sacrifice or white captures all, but that’s no help for him as finally white will capture all. 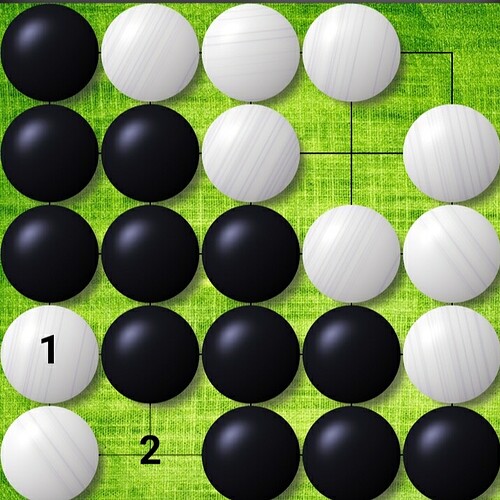 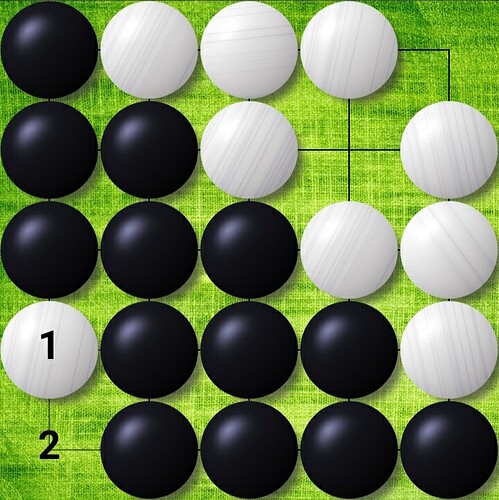 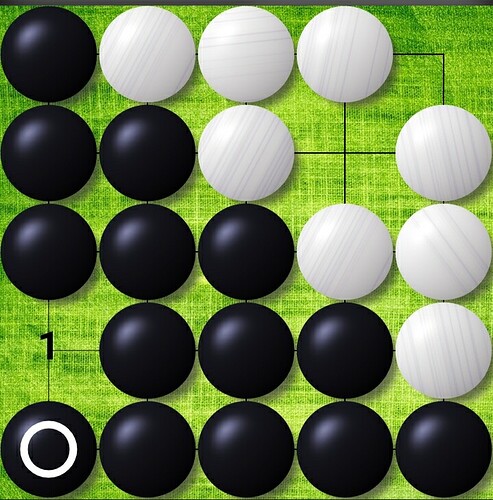 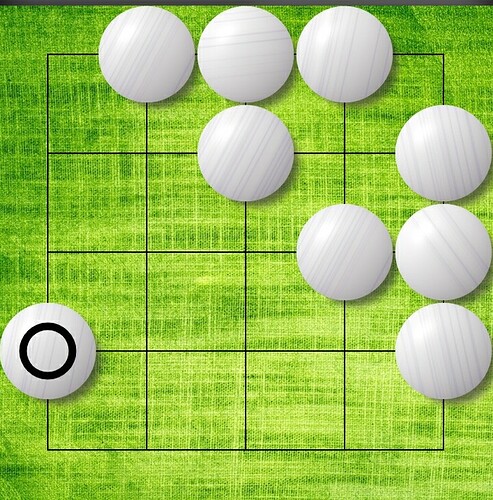 This last position is completly hopeless for black. There are many ways to prove it but an interesting one is that the lonely stone is connected to the upper right white group (you can try, nice little exercise, black cannot capture it) Indeed black has no place here to build a living group with two eyes.

If both had no interest then we would leave the situation and no one will be captured. It’s a special case of the rule of go called seki.

But that’s not the case here as white can eat the black stones. So the full board is white.

Here i put another position to look at. 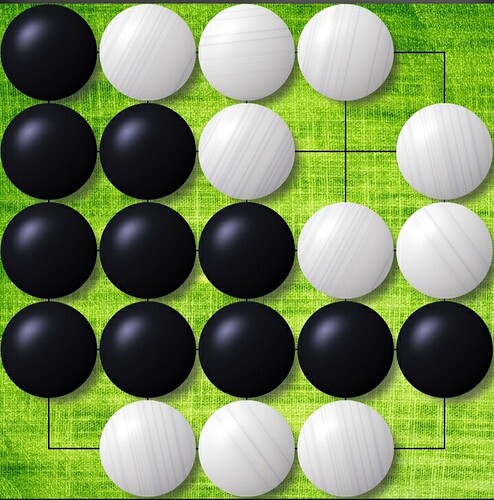 Thank you.
I am not concerned with the inevitable ending, though I understand that is how disagreements are worked out at the end.

I am wondering about the rule. Both players ended the game.

Is black dead because it has no eyes or because the computer worked out that they were going to be dead anyways.
How is the end game negotiated?

Both players pass. The scoring program will mark black as dead. If not, one of the player should. If no agreement, discuss politely (some few cases can be very complicated) or call a mod (especially when someone try to cheat the scoring, but for help too). If agreement confirm.

Is the confusion I am sensing in myself due to the ruleset that is being played?
I am on Cosumi and it indicates the rule set is “Japanese Rules(Territory scoring)”

Ah ok this is then about when to pass. As a basic advice, whatever the rules, finish completly your boundaries until you master more the game. Check well you don’t leave any weakness. Not well finished game may confuse the scoring system. The game you show is well finished. You don’t need to take the already dead black stones.

You can stop before in some rules if
1 you will not have to reinforce your boundary when the omitted moves would oblige to.
2 the territories are well defined (no hole)

This need some experience.

I think this might will depend on the computer in question. I would hope that a bot wouldn’t continue with pointless moves.

In general it’s as Groin explained. If there are no more useful moves then pass. It’s not always obvious when this is exactly, especially if there are a lot of dead stones on the board or complex boundaries but with some practice it shouldn’t take too long to figure out.

Do come back with any other questions or examples as you progress!

You may read somewhere that if you waste moves you lose points.
That’s true under the japanese kind of rules only if you play unnecessary moves (in your territory or giving prisoners) AND if your opponent don’t answer them (pass).
So if you feel it too complicated, it’s better for you to chose a chinese kind of rules. In that case it doesn’t matter.

In your game for example, if white plays now 1 and 2 to capture black, and if black pass each time, white will lose 2 points under Japanese rules, and 0 points under chinese rules.

No, regardless of the ruleset there is no need to keep going since black already has no way to live, so the white player can already consider it dead and pass.

Black will reach the same conclusion.

In the event where black would disagree at the end of the game and refuse to consider his stones as dead, then

I am wondering about the rule. Both players ended the game.

Is black dead because it has no eyes or because the computer worked out that they were going to be dead anyways.
How is the end game negotiated?

Black is dead, because black doesn’t have 2 eyes or a seki. This the case under any rule set.
The players could (mistakenly) disagree and a computer could (mistakenly) make some other judgement, but that doesn’t change that objective truth of the situation.

As soon as players are past beginner level, they would be able to evaluate such situations correctly without any disagreement and without any help from computers.

Go is thousands of years old and computers are quite a new phenomenon in the history of the game. And only since a few years, computers are even capable of correctly evaluating final positions of a game of go in almost all cases.

So you can still encounter cases where your opponent or the computer is wrong. If you encounter such a mistake in one of your online games, you can call a referee/moderator to help out.

No, regardless of the ruleset there is no need to keep going since black already has no way to live, so the white player can already consider it dead and pass.

Please be careful, I believe this is not true for all rulesets. See e.g. Tromp Taylor Rules (the most elegant rules imho, but a bit annoying in practise because you have to manually remove all dead chains.)

From what I understand, there is provision for a more human and normal endgame phase, with the removing of all dead strings as a backup in case of disagreements in HvH games. It was learning this that converted be from NZD Rules to Tromp-Taylor Rules.

TT rules are silent on this, but in my view the removal of dead stones left on the board does not need to be explicitly specified in a ruleset to exist; it’s performed in any case, by mutual agreement of the players to skip unnecessary steps because they both agree on the end-result under such ruleset.

Now since we’re speaking of games against a computer on an online server, the actual answer will depend on the how such server was designed (and I have no idea how OGS handles TT rules).

“Pure” Tromp-Taylor rules do require the manual removal of stones (this is convenient for self-learning AI:s for instance), but removal by agreement is mentioned as a “practical shortcut” in Comment 8 here.

OGS does not implement Tromp-Taylor (not much need since the practical differences compared to other area scoring rules are very minor).

in my view the removal of dead stones left on the board does not need to be explicitly specified in a ruleset to exist; it’s performed in any case, by mutual agreement of the players to skip unnecessary steps because they both agree on the end-result under such ruleset.

“players may end the game prematurely, given unanimous agreement on the game result”

is, albeit reasonable for almost any game, not always silently implied.