Where does etiquette suggest Black’s first move should be played? My understanding is that in real life games black should place his first stone in the far right corner to be polite to white. Can this translate online? I am in the habit of playing upper right as black but I’ve noticed that on the games list black is above the board and white below. Therefore should black play lower left as if black is sitting at the top of the board?
(I think that really black should be at the bottom of the board and white on top then the world would all make sense but I guess there are very clever reasons why it’s the other way round on OGS. I don’t know about other online servers of course!)

Black should play the first move in the lower-right half of the upper-right corner. If the position remains symmetrical, White should play the second move in the upper-left half of the entire board. This is etiquette whether in person or online. The rationale is that most people are right handed and will naturally extend their right hand over these parts of the board, and you want to grant your opponent maximum comfort for playing the first moves as a sign of goodwill.

Online black can play wherever he/she deisires to and not breake any etiquette. Its just, for most ppl top-right corner feels the most comfortable area to start with as black, maybe it’s more just a common habit instead players following some old etiquette.

So the OGS thumbnail games list has the players the wrong sides of the boards?

I never thought about it that way. Maybe.

The common convention when displaying a game board vertically is to orient it such that it matches black’s perspective (i.e., black is seated at the bottom edge and white is seated at the top edge). This practice is common across various situations (e.g., recorded games on paper/books, computer screens/software, and even large magnetic analysis boards that people stand in front of).

So, yes, I think you are right. The name labels around the thumbnails seem to be backward, with white at the bottom edge and black at the top edge.

Do you think anyone would mind if they were turned around? It’s been bugging me for a while!

Horizontal placement of names is a whole other issue. However, that’s often done in a manner that does not imply which player is sitting at which edge of the board.

It’s not clear to me what the common convention is for listing the players in horizontal order. It seems that listing the player with the white stones first might be more common, perhaps since, historically, the stronger/more senior play would take white (in the pre-komi era).

The issue is compounded by the various types of historical writing/reading directions:

Also, no one even agrees on how to label the axes. Origin top left or bottom left?
1-19, 19-1, A-S, A-T… There are more than 24 (many more if we added CN/JP labels) different ways to label the intersections.

Sure, there are other more complicated issues, especially related to language (there does not even seem to be consensus on the name of the game). However, I think the original poster is just simply asking that the player names at the top and bottom of the thumbnails be switched, which does not depend on language conventions.

I don’t know of an example where a printed/vertical/computer display of the game board does not follow the convention of showing black’s perspective (i.e., like black is seated at the bottom edge and white is seated at the top edge). So despite all of the other issues, this seems to be one convention in go that is relatively consistent.

However, OGS’s game thumbnails place the name of the white player at the bottom edge and the black player at the top edge, which appears to contradict the above convention.

This FEELS like it could be rather simple to have as an option that players could set in their personal settings. For example “Auto-rotate first move to [] upper right, [] lower left” …etc.

Online we have the advantage of having computers do the calculations for us.

Heck, you could even force the second move, with rotate AND/OR mirroring, forcing the second move to be in the upper left corner (or whichever corner the viewer preferred.)

This would, of course, require people to get used to seeing the number/letter locations to be mixed in games that were played by people not following the unwritten rules that viewers expected and when doing commentary viewers using this tool would need to double check their assumptions about locations in chat.

Oh, how interesting the internet is.

I honestly did not even know that there was a “polite” first move until a few months ago. I play it in a great deal of my live games nowadays but I can’t say I do it much in correspondence. I really need to work on this practice more.

On OGS though, and I guess other servers too, we all look at the board the same way right? We’re not looking at it from opposite sides. So I’d say it’s not all that important to play in a particular place for the first move online.

I’m not sure whether this is something I remember reading or something I just speculated at some point, but the top-right first move may be associated with the idea that it resembles bowing to the opponent (a mark of respect) as Black has to bend over a bit.

A more out-there idea that is my pure speculation is that it could also be related to symbolism similar to the Western handshake; that is, you extend your hand to show that you’re not holding a weapon. If you consider that the roots of professional Go lie in 16th-century Japan, in a social environment dominated by civil warfare, samurai and shoguns; and that Go was for a long time considered to have strong associations with military combat, it’s not a difficult thing to conceive.

One more thing: the 19th-century professional Osawa Ginjiro, who was a contemporary of Honinbo Shuei, is said to have been left-handed and to played his first move as Black in the top left corner.

I think the traditional rule might actually be to use the parallel corner from your playing hand, so that your first move simulates a respectful bow. On Sensei’s Library it states that the 19th-century professional https://senseis.xmp.net/?OsawaGinjiro was left-handed and began the game in the top left.

I don’t know but modern custom is to play in top-right anyway. Iyama Yuta is in fact left-handed did you know that? 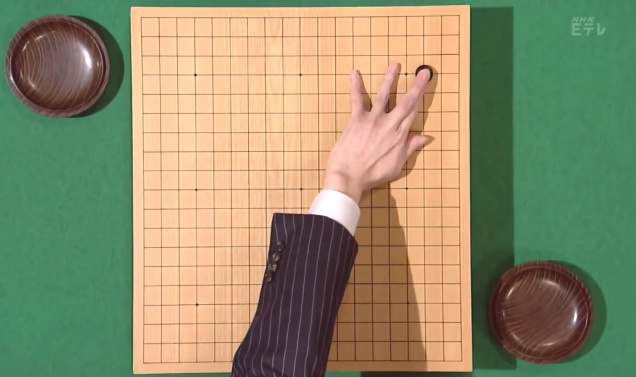