While studying opening patterns with KataGo, I stumbled upon a new move (well, new to me) in the flying knife joseki, connect variation. That is to diagonal rather than stretch in the corner (2 at 2 rather than S17). 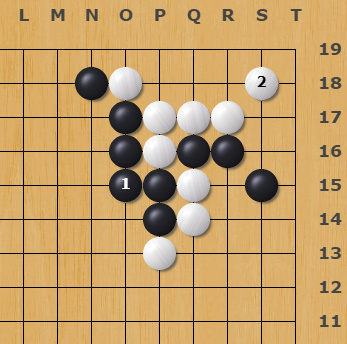 Does anybody know anything about this move or its continuations? KataGo suggests Q13 or R13, but the win rate varies highly with the number of playouts in many cases.

Once you get into the mid to high thousands of playouts, KataGo seems to mildly but clearly dislike this move, at least for me on the 40 block network in an example position (parallel 4-4 points, black invades white’s 4-4 on move 5 and then they go into this variation, so color-reversed compared to your example), because it thinks that black R13 next is too good: 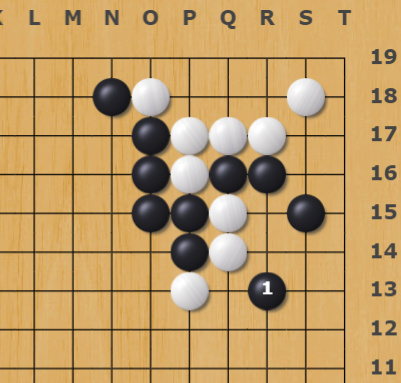 But this depends on the side position, so I could imagine that with a different whole-board position this move would not be so good for black, and then white’s S18 would be possible.

The key point I think is precisely whether R13 is good for black given the side position. R13 is not possible if white plays S17, so by playing S18 white is enabling black this new option. However, if R13 is not good for black, then the extra option doesn’t matter, and then S18 is a gain for white compared to S17.

Why is it a gain? Let’s see if black tries to just pretend as if white played S17 and cuts, which would be the normal move in the S17 joseki. Then we get this variation: 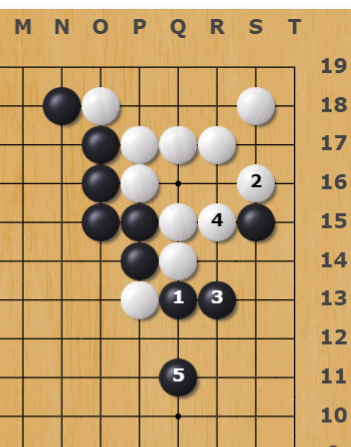 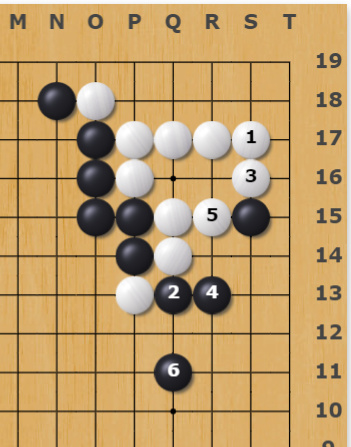 This is not the normal joseki, but KataGo judges it as only a percent or two worse for white, so it’s basically about as good, and it lets us compare more easily the effect of S18.

So the only difference between these last two screenshots is where white’s stone is placed. KataGo judges the S18 stone placement as 9% and 0.7 points better than the S17 placement. A pretty big difference as far as opening moves go, by bot standards! Why such a difference for such a minor stone placement?

After playing around with KataGo and even running some self-play just to see what kinds of followups it might choose later in the game, it seems that that stone does make an endgame difference in some cases. For example, if white saves the cutting stone and gets to attack the top black group, depending on the top side, white may want to spoil black’s shape with 18 in this diagram: 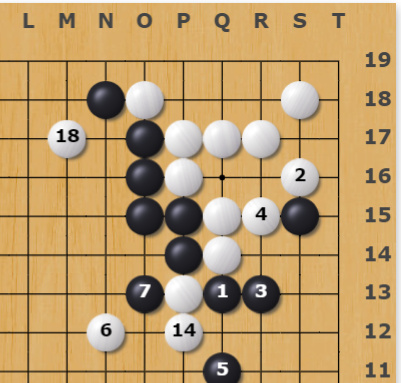 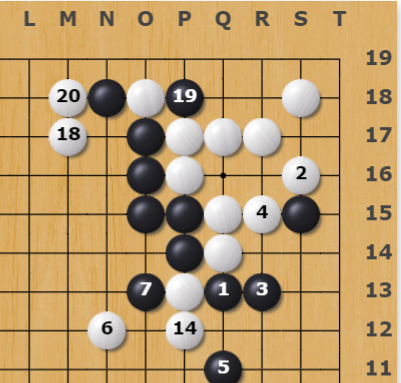 So long as there are outside forcing moves (e.g. N17 or M19 being sente) white is highly reluctant to block at Q18 and help black capture and become more solid, and if black’s group needs to make eyes or white does need to use one of these outside forcing moves, black may sometimes end up capturing without white having blocked at Q18. So clearly S18 now instead of S17 is providing endgame value, by restricting black’s ability to monkey jump into the corner in the future.

I believe this potential endgame improvement is the motivating meaning behind why white might consider trying S18 in the first place, and why it could be better in the right board position, so long as white has no fear of the sudden new tactics available to black like:

Oh and actually I guess there is also a life and death benefit too. In the second to last image, if black captures at O19, then white can play N17 to falsify the eye, then if black plays Q18, then white can respond Q19, still holding black to zero eyes. But doing this requires the S18 stone.

This seems potentially much more important than the endgame benefit, and maybe also helps justify why S18 has the value it does when it relies on so many moves deep things proceeding in such a way (the threat of a threat of a threat, forcing black to give up a little bit to be slightly more conservative from the start).