In this EGF tournament game 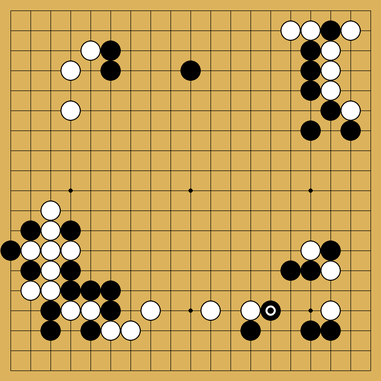 one of the pro player timeout because of its connection.
Interestingly and with sportmanship the players forked the game and continued it which is a so awesome attitude.

On the OGS side, forking proved to be a great feature too!

As being unusual accident a few crucial improvement were requested

It would be great to consider these few points so as to encourage keeping gentleman attitude like they did if this happens again.

Great game and great players, hope this to be a deep teaching to all trolls and misbehaviors on the net!

I think it happened once more at least but not that often as you say. From my memory who is weak sometimes. Anyway that makes even more important to see how we can improve on the forking in tournaments

So far the player who wasn’t disconnected always immediately suggested to resume the game, it’s not clear to me what would happen if that wasn’t the case, and I hope we don’t find out.

In general with online tournaments every player is responsible for his connection, but the “disconnection protection” (is that what it’s called?) is more of a server issue, in a tournament the player is entitled to X time even if he “wants to” spend that time lagging. in physical tournaments if you walked away from the board (or came to the game late) your clock still needs to run out before you lose.

Your suggestions are all good - especially the one about seeing the AI graph, as it can taint the game even if you can restart, but I really think the only way of solving the core issue here is making the “forfeit after 5 minutes of DC” an optional setting.
Maybe you would get the same 5 (perhaps this can also be a variable?) minute grace timer for connection issues but after it runs out you would still use up your main time.

Yes I think too that it would be great to be able to deactivate these 5mns, at least for serious tournaments, where sandbaggers and trollers are never part of it (which is the reason to have it implemented in fact)