This game: https://online-go.com/game/1844540 was set to pause on weekends, but timed out roughly four hours after the start of the weekend last night. I was expecting it to have automatically paused at 8pm Eastern time, which is when pausing on weekends normally begins, but it timed out around midnight eastern time.

Well there is a way to check the settings you put in for your match, you can check them and see if you enabled pause.

@Go_Pro, I assume you mean this here

but sadly this does NOT show the remaining time. 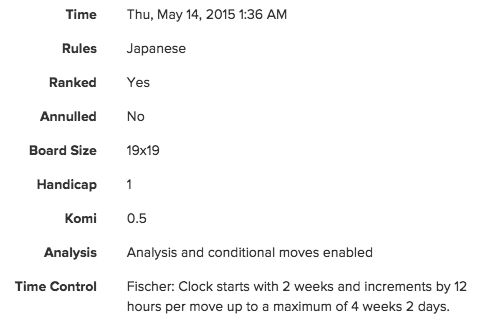 That said, I know this game was set to pause on weekends. It has been going on since April and has paused on all of the previous weekends. I also spoke with the other player and he confirmed that he agrees that the game had been pausing on weekends previously, prior to this particular weekend.