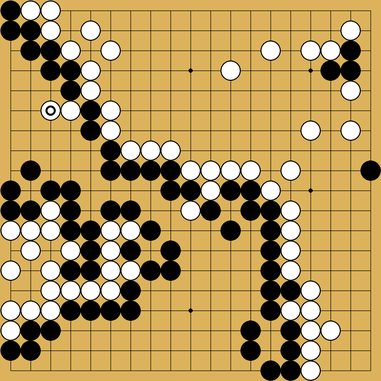 If you’re wondering why the bot played P11 rather than respond to your J7 move, it’s just something bots do when they’re leading by a lot. Most bots don’t care how much they win by, only that they win. So bots sometimes play very defensive moves if there’s even a tiny chance of losing the lead. At move 80, answering your J7 move won’t affect who wins the game. But if you cut and live somehow, that certainly would.

moves I could have done differently thanks

Move 21 should be different. The D15 move makes an empty triangle shape—a classic example of a bad shape. At your level, try to avoid making empty triangles. If you still want to move that way, you can think about jumping to D14. If that jump makes you nervous, you can jump to the C line instead of the D line. But really you don’t need to do any of that. Just capturing the stone would have been perfect. Besides capturing a stone, you would have made a lot of secure territory in that corner.

Another mistake was building the o8 wall. You gave a whole lot of territory to white and what did you gain in the end? You should’ve invaded the top/right instead. Actually you should’ve done it much earlier e.g. at move 29.