Getting obliterated in all of these games. Please help. Also, what books would you recommend to start off to get better @ 19x19 starting from 18 kyu to beginner 10 kyu/ beginner sdk? Thanks 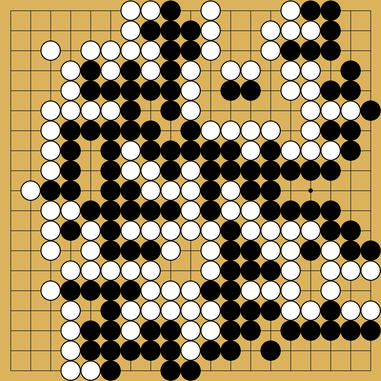 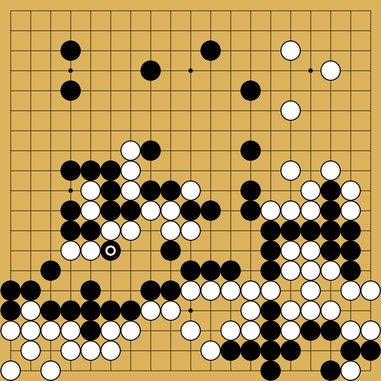 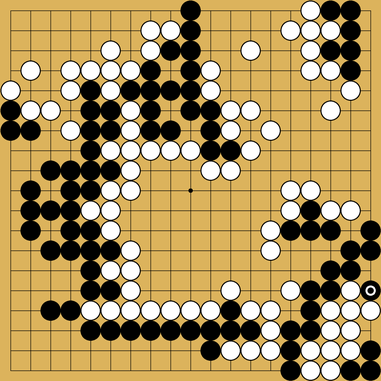 Dwyin’s “Back to Basics” series of videos.

Took me from 19k to 11k. Sorry they’re not a book - maybe Dwyrin should write one!

You seem to focus a lot on living. As such, you seem to be making a lot of smaller moves that help you live, but only live small. In one game, you spent WAY too many moves fighting a ko in the corner, in another you let them develop a huge center and only started to invade after it became really solid, and in the other one, you tried to invade bottom to attack a group, which allowed him to develop the left side while attacking you.

So it seems to me that you fight way too much (I imagine that’s because you’ve been playing smaller boards all this time) and don’t spend enough time actually making big moves.

Yeah! This aligns with the #1 topic throughout Dwyrin’s series which is “what is the next big move?”

I’ve done a short review of the first game, mainly of the opening, as I don’t feel confident to comment as it moves into the middle game.

Here’s a review of the third game:

Opening:
-If your opponent encloses, try to block the extension. If they extend, block the enclosure. If you have an enclosure, extend. I usually block extensions with a large knight’s move, which can jump under the 4-4 and live (or come reasonably close) if my opponent pincers. You either want to extend small, to take the corner, or go all the way to the star point, with the intent of pincering back if your opponent approaches your corner and taking a big side.
-When you invade, try to make sure you can make a 2-space extension in either direction. You had plenty of space to make a base on the to[p, but you invaded to close to one of the sides.
-Learn some common, simple joseki. You get wrecked misplaying some simple sequences that show up all the time (i.e. 3-3 invasion in game 2).

Middle game:
-Let dead groups die. Your opponent might screw up spectacularly and let you live, but if there’s an easy way to kill it, just tenuki. Fighting with a dead group (like in the top right) strengthens your opponent in the surrounding area, and worst case gives away sente. Don’t play hope Go, as in “I hope my opponent makes a mistake.”
-If you have a weak group, reinforcing it is top priority. Try to do so by leaning into your opponent’s territory, or by leaning on their strong groups.
-Try not to get sealed in. If your choices are “make two eyes and get surrounded” or “connect out to the center”, the latter is almost always the best choice. Big groups can usually find eyes if they’re in open space.
-Keep looking for big moves. You did a good job of this in the opening, but in the middle game you played a ton of 1-3 point moves that gave away sente. You can more or less ignore capturing any groups of 1 or 2 stones until the end game, unless you either need to do so to live/connect or doing so will make it hard for the other player to live.

Endgame:
-Now you can play all of those little moves, but play ones your opponent needs to respond to (i.e. sente) first.

I commented game two up to move 32. (You had already fallen far behind by that point.) In those moves I made two observations:

This is very sound advice. Thank you, i will definitely keep this in mind in future games

Will check it out. Thank you. And thanks to everyone who took the time out to review the games and give critical feedback.

This is major advice, and the review is awesome as well. Thank you

@o00o00o Another advise for you, is to ask your opponents to review the games with you.
I was planning to tell you for us to have a review of the game, so I show you what I thought would be better and you could do the same, but you vanished straight after and I didn’t get the chance.

Reviewing with fellow players, even if they are not necessarily better than you can be really productive.

I gotcha man. Very much appreciated

I had some time to kill at the airport, so I added a review for game 1, as well.

Compared to game 3, I thought your play was better in game 1, even if the result was about the same. I think your main weakness was submitting to everything your opponent was doing. You had a couple situations where you were locally quite strong, but backed off and defended instead of taking advantage of cutting points. You also let some groups live that really should have been killable. If you aren’t in danger of being killed, yourself, you could really afford to be substantially more aggressive. 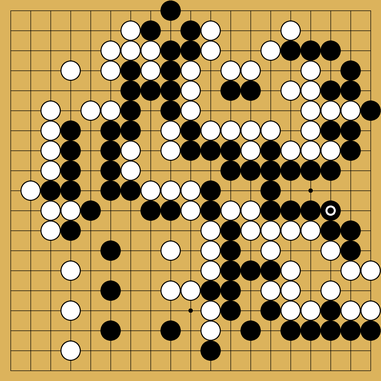 ‘get strong at tesuji’ from the get strong at Go series. Great affordable book, and forces reading more than the apps do.

What you recommend that for my rank level? What about Opening Theory Made Easy?

yes, it is good for any level. The problems are graded by stars (up to 4), and the 4 start ones are more towards the back, they would be around a Dan level problem. But any one star or two start problem would be perfect. With the one star, you want to get to the point where you can just look at it and know the answer. Regardless it will improve your rank quickly, and improve your reading skills.

the Opening Theory Made Easy I have not read, so I cant really comment on the quality of the book. But it doesn’t hurt to own more books, the opening theory is important, but I think you will gain the most from the tesuji book. there is the saying; if you study joseki you loose two stones, if you master it you gain 4. Fuseki, shape and Joseki are important concepts, but fighting and reading will help you more at this point. a lot of that information you can pick up free from things like senseis library or teaching games.

Appreciate the advice man. Looking forward to purchasing this book