Go rule question: line through the board 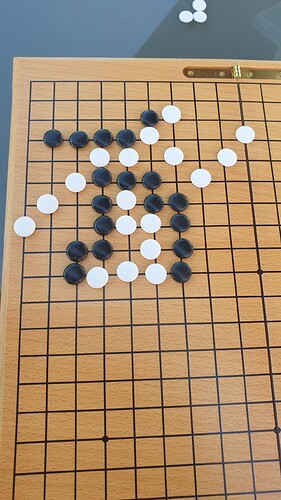 we are only playing on one quarter of the real board.

thank you for your help.

To give you a bit of a broad answer (maybe somebody else will be nice enough to share something more detailed with pictures) - the act of creating a line from one end to the other does mean anything in itself out of context. It can help you control parts of the board, yes, but it can just as well result into nothing useful if Black manages to capture parts of your line or manages to create a living group inside the space you tried to wall off with your line.

If you are not sure what a living group might be, check out: Alive Groups | Learn to Play Go

You would have to finish the game first to see if the line was good or not, but by itself it does not really mean anything.

In your example the line can also easily be broken as the move marked bellow threatens two parts of the wall so Black will be able to capture at least one of the two - now separated - groups. 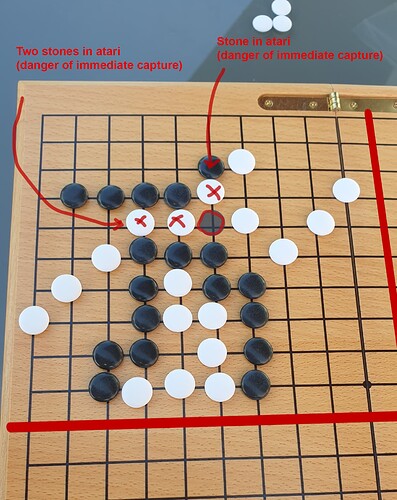 Let us know if you would like to discuss the issue further or if it still did not click. Go rules can be confusing at first, and it is a good idea to clear up those difficult questions. And of course, welcome to OGS

So you are playing within the Red area is it? (See below)

And you’re wondering if the marked blue line (see below) or stones from one edge to the other of the board does anything special? 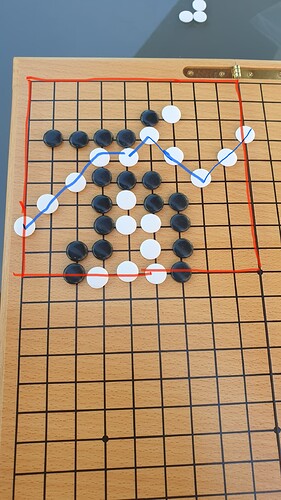 If yes to the above questions then, no having a line of stones across the board doesn’t do anything special in particular. Areas/ territories are agreed upon at the end of the game, when both players pass.

Depending on how you score, if it’s area scoring (stones+ surrounded empty points) then you can just capture all opponents stones possible before passing to score, which can settle any disputes.

If using territory scoring (empty points+captures) then it loses points to capture stones that could be captured no matter what, so typically both players agree which stones will be captured and can’t be saved.

Hello,
Thank you both very much for the explainations, that has helped me a lot to understand the game better.