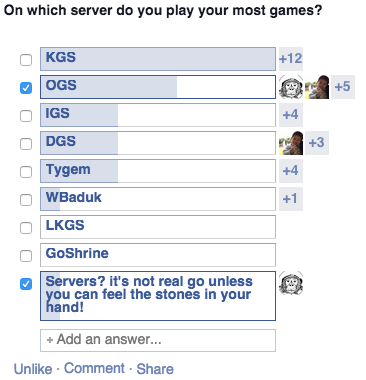 OGS is catching up…

Hmmm, are the numbers the the sides the number of votes recieved minus the number of pictures displayed with a blank being zero? If so, is this statistically significant? I don’t know how to determine significance, but intuitively 30 votes doesn’t seem like enough to draw a conclusion.

Also, is there any correlation between facebook users and which server they play on? Even if this is proportionally correct, it only indicates the proportions of players on different servers who also use facebook and are also willing to participate in polls. Time of day could also be a factor.

Also playing go on a real board, while a valid preference, doesn’t seem to fit under the scope of this question, as a real board is not a server. Well, I’m sure someone has hollowed out a floor board and put a home server in it, but in general, go boards are not servers.

Still, interesting findings which seem to support my general feel of how popular different servers are, though I’m surprised at how high igs and dgs are. I don’t mean to be picky; I understand it’s just an informal poll, but I just thought I’d clarify some shortcomings.

Also, has anyone here taken enough statistics to know how to find out how statistically significant a given data set are? I would be very curious on that point, though I guess I’ll find out next year, like as not.

That thing is most likely all about internet fame for the servers. Significance about none until nothing.
Most servers have some kind of player statistics, however, I haven’t heard of a valid comparision so far.

I hope it becomes popular

Is there any way to stop the site from replacing my ":)"s with "

"s? Or am I the only person who wasn’t alive back when the command line was how you interacted with computers who thinks that plaintext emoticons look better than the colored ones? Though it does solve the problem of putting a smile face at the end of a parenthetical statement…

@Samraku, you can always use the

I guess that works.

Nice to see how the numbers have changed 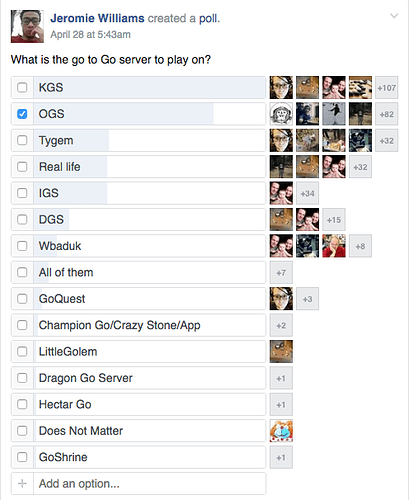 And yet another poll:

As for you which is the best server that you play? 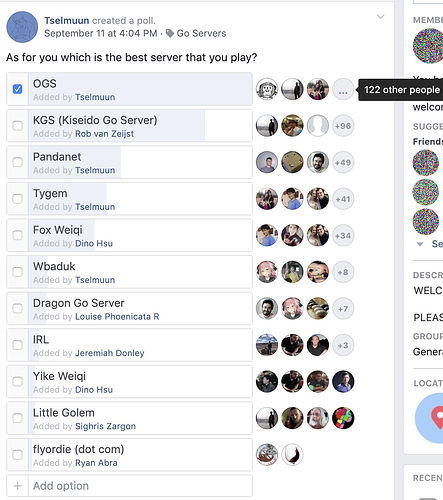 Our dominance was inevitable! ~laughs maniacally~

Is there any way to stop the site from replacing my ":)"s with "