If you guys have time, would you mind filling out a survey? It would really help me out! https://forms.gle/u7FhyXgRQoWMz4oeA

Survey taken. I spent some time on it, trying to give some serious answers. I hope you find them useful

Hi! great survey. I’ve already taken it and I’d like to read some more people’s responses.

Could you please post a link to the “READ OTHER’S RESPONSES” page that one gets access to if one finishes the survey? Currently there’s no way to get there from the front-page link you show above without going through the whole survey again.

Please and thank you!
tonyb

Could you please post a link to the “READ OTHER’S RESPONSES” page that one gets access to if one finishes the survey?

Does this work for you?

thank you! that works great!

It’s really interesting to read the thoughtful replies of others

There is, I just did it a checked. At the end it says See previous responses in a blue line below Thank you for taking the time to fill out this survey.

I enjoyed reading what others had to say about certain questions on this survey thank you Shawn.

Let me flag up an ambiguously-worded question: “How much time can you put in a week to improving at Go on average?” It’s not clear whether this refers to how much free time you have that you could in theory put into studying Go, or how much time you actually use to study Go. I answered it as the former.

Shout out to the person who said: 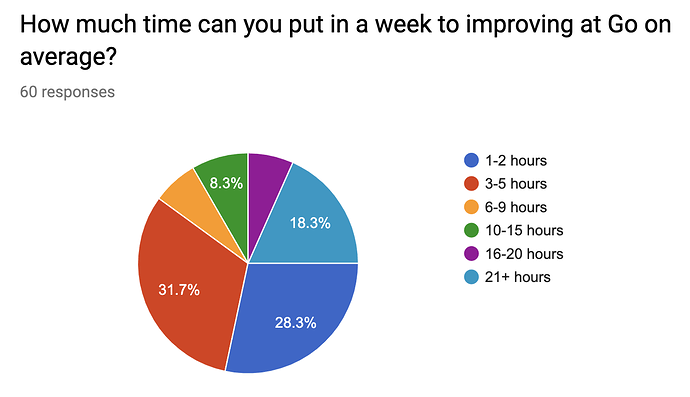 I wonder … HOW is this possible?
No job, no school, no family, no other interests, NO REAL LIFE? Go as top priority?
Or IF they have any of those, how do they manage?

I for one never could afford spending that much time on ANY single thing when I worked, also not when I was a student, and now that I’m “working” towards early disability retirement, I still have too many different “real” things to do to be able to spend that much time on Go.

Or, well, maybe it’s just me and that alleged ADD.

Television consumption is a major part of media consumption in Western culture. Similar to other high-consumption way of life, television watching is prompted by a quest for pleasure, escape, and "anesthesia." Extreme dependence on television is actually an addiction to the prepackaged forms through which pleasure, escape, and anesthesia can be conveniently attained. In the US, there is an estimated 119.9 million TV households in the TV season 2018/19. In 2017 alone, an average U.S. consumer ...

Well, yeah, but I don’t even have time to dedicate to watching TV … TV runs on an iPad here, on my left side … to spend time on watching TV exclusively seems like a waste of time to me.

Well, if the question is about the time one can, not necessarily does, invest into improving at Go (or anything else), it makes sense that many can answer “21h+/w” in earnest, even those who have a full-time job.

Many live with their parents until they’re about 18-21 years old, and until then school is their main (often sole) occupation—and dunno about Germany, but here that means a lot of free time. Even with college: it may be more demanding, but many go on living with and/or being financed by their parents. So I think a good number of people up to their mid-twenties could invest 21h+/w into improving at Go.

Moving on to having to work in order to eat, the dynamic has changed. A job is no longer a guarantee of long-term stability and more people are deciding to work for themselves. With the Internet, we can run a business using our computers and automatize a lot—and many jobs now offer the option of working from home. Making our own hours, and the flexibility that comes with it, makes it easier to include a serious dedication to something like Go into our routine.

It also makes sense some of the Go players we have here are retired—and after retirement often comes, I believe, the problem of a way to fill up all the extra time we find ourselves with. The new dynamic I referred to applies to this as well: many are retiring early.

But even in what is or used to be the usual scenario, having a full-time job, having a family to take care of, having to pay bills and so on and so forth, I still believe that particular time investment is feasible. Let’s work with that 3h/day average. Bearing in mind such hours don’t have to be continuous, I say that’s a manageable quantity.

For example, take USA’s work hours: 9-5. One could get up early and get 1-1.5h of uninterrupted study before making breakfast/getting ready for work etc. Add 0.5h at lunchtime. Upon getting home or before going to sleep, another 1.5h. And the odd moments: solving tsumego on the train, playing on a Go app while in a line, reading a book during a break etc. And it’s possible to go the extra mile at the weekends. Sure, it’s not peachy, it takes planning, and of course dedication, but I believe is feasible.

In fact, it comes a point when 3h/day won’t be enough, not for something that isn’t (or has moved beyond being) simply a hobby. Maybe there aren’t many of us seeking to become Go pros, but there are other pursuits in which there isn’t a shortage of people fitting an average of 4h/day worth of practice in order to master something in a reasonable time frame while studying or working—or both. Think sports, martial arts, music, etc.

Case in point, the civil service is a much coveted career here in Brazil. It takes passing an admittance exam (a “concurso público”) in order to work for the government, and the fact that we have even a word for those who study for that, “concurseiros”, gives an indication of how common is that pursuit—or at least the desire.

Now, there are concurseiros and concurseiros. Some study whenever, participate in each new concurso, and repeat that literally for years, hoping someday they will pass—some do, some don’t, and that’s that. Others, however, can’t or won’t afford to wait that long: they get methodical—and they put in the time. The average of daily study for those who pass in up to 2 years tend to be 4h.

Sure enough, some drop out of their jobs, either because they’ve saved enough or have a financial parachute, to dedicate themselves entirely to that. But they’re the exception. Most balance studying for concursos with work, college or, once again, both—I remember the fellow who used to get up at 4 am and study until 7 am and went right back to it at night after his children fell asleep.

Even if that’s an example of a temporary, mid-term investment, so to put it, the fact remains: being insanely committed to something can force us to find/create an unbelievable amount of time we’d otherwise have thought impossible. Of course, I don’t make the claim anyone should or shouldn’t approach Go like that, or in any other way; but I believe the possibility is there.

Very well put. You put a lot of thought in this and you explained your reasoning and thoughts at length. I appreciate both. I really enjoyed this.

I myself do not have a standard job. However, I have six children between the ages of newborn and 14. I am a homemaker, father, home schooler for five of my six children, and I have more than my fair share of duties and responsibilities. I am also studying Copywriting, so that I can help my wife establish a job working here at home. There is plenty of studying related to preparing curriculum and time spent grading assignments.+

On top of the work portion of my day, I spend most of my free time with my children and my wife, as each desires my personal attention. It is quite rare that I get to do something on my own, in pursuit of my own interests. I’m quite content with my life, but it is an extraordinary amount of work, seven days a week.

Go is a really awesome hobby for me to pursue. I am so glad that I found it, because Blitz matches and Correspondence games mean that I always have something waiting for me when I visit the website. I can get a full 9x9 Blitz match completed in 3 to 5 minutes and Correspondence allows me to make quick moves to to spend an entire lunch period considering a single move.

I was one of the people who marked 21+ per week. I am able to achieve this each day by maximizing my free time. My free time is heavily fragmented and unpredictable, but if I take advantage of all the little moments that I can, I usually have no trouble getting in three hours of time.
My kids also sleep 10 hours a day, while I try for 8. I have issues getting in 8 hours a day reliably though due to Sleep Apnea and poor discipline when hanging out with my wife after she gets home from work.

These extra hours are usually applied to school study and researching Copywriting. But the point is that I find a way to make it work, by making Go a serious priority in my life. Most people who want something bad enough will find a way.

I think when most people think of time, they think of it in nice tidy little chunks. But if you look at your day and analyze it, you will find there are little fragments of free time floating around everywhere. And if you have a hobby, like I do with Go, that allows you to capitalize on these little chunks in a meaningful way, then you will find you have far more time than seems likely, at first glance

I imagine if you take public transport to your job, it could be reasonable to assume someone spending an hour on a commute (at least where I’m from, we’re not so efficient). That could be 2 hours a day you could read a book on a phone, or do some puzzles or play a game maybe, or look at a pro game etc.