that whole block between 2012 and 2014 is so large, starts and falls off so rapidly, that i wonder if
it wasn’t some problem with disambiguation (say with the programming language Go) that got
corrected

some problem with disambiguation (say with the programming language Go)

leads to the page “Go (game)” on Wikipedia.

it does now, i am just wondering if it didn’t during that interval, since its such a drastic and abrupt mode change.

Mh… since the link points to a numbered page (which is the same “Go (game)” page), I’d guess it pointed there all the time (Wiki internal “absolute” link or something?).

What about airings of HnG? When were they? And where?

thats a good thought. apparently HnG was added to Netflix in April 2011

This, BTW, is the page hits history for en.wikipedia.org/wiki/Go_(game), as shown on Wolfram Alpha after entering “Baduk” …

@trohde, I hope you’ll post an updated graph from Wolfram Alpha to show the spikes over the last several days. It would be interesting to compare it to this pageview analysis from Wikimedia Tool Labs. 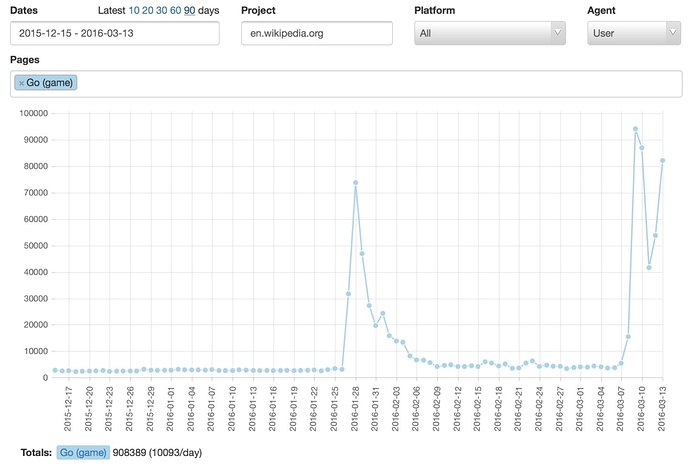 Doesn’t seem much change there yet:

Wikimedia Tool Labs will be much more accurate, I think.

Wikimedia Tool Labs will be much more accurate, I think.

Wikimedia Tool Labs works well for the past 90 days, but I can’t find a way to specify a date range anywhere near 8 years.

Thanks for posting it.

Maybe you can make something of this, @way2go, I for one can’t.

Wow, that’s a really sharp spike, @trohde. It will be interesting to see whether it will drop all the way back down to pre-match levels, or whether we’ll keep at least some of the most recent interest.

Just read about a German news magazine … their Web site had a big article about the DeepMind Challenge, and integrated was a tiny Go “course”—it was finished (not just clicked!) by over 100K visitors!