Although you know what? At least we mostly played in the “right” part of the board… So not that bad after all

Alexander, would it be possible for you to post the game here? Perhaps with a kifu, even?

I always appreciate Yamashita’s games, and this one seems to have been quite interesting (on the first day at least.)

@bugcat not sure what you mean by kifu, but the moves were in the same demo board the whole time, you can download sgf: https://online-go.com/demo/view/318402

Ah, that was unobservant of me. Thanks for pointing that out.

Next round. Yamashita Keigo sealed a move, black to play! 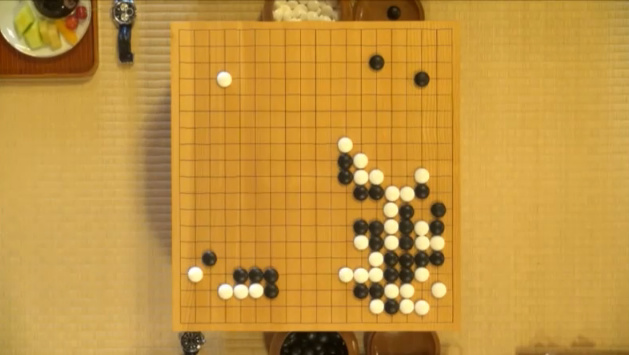 While in the previous game I felt like my move had a chance, I have just no idea here

But what the heck. I will completely shock Iyama Yuta with C14

(EDIT: To be honest I had a completely different idea mostly, but it just seemed too obvious

and I would want to surprise my opponent. - it might be a very bad idea :D)

I personally think that pros always cut stuff so N12 would be safest bet compared to all other options. It threatens something, it continues fight on the right, must be somewhat good

Edit: I’m cheating a little bit since I watched broadcast and they were talking about cutting a lot.

I agree with S_Alexander that Yama-chan will cut at N12. It’s an obvious weakness in White’s shape. Consider that it doesn’t just cut, but also threatens to to atari at P10 which will make miai of capturing the empty triangle and five-stone L-shape. Additionally, White cannot respond to Black’s cut at N12 by making his own cut at M9 because Black can play as mentioned and capturing the five-stone L-shape which would make him very thick.

I agree with S_Alexander that Yama-chan will cut at N12

Well yeah, me partly too. But that’s BORING

I was originally thinking of the hane at L12, but I suppose having w cut at M9 after the hane is bad, so the cut at N12 seems better… 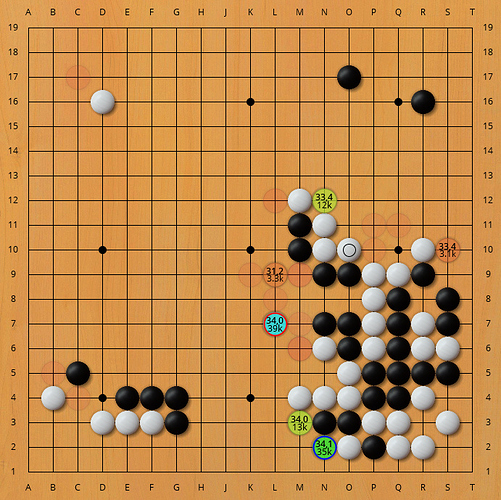 Even Leela isn’t sure what to do with this position. Leela kinda wants to make an exchange on the bottom first, but also wants to jump out to the center. Cut is also considered, and basically it jumps from one option to another as it searches deeper and deeper.

Thanks for everyone’s suggestions. But we’re wrong again. Probably our kyu mind is too fragile to come up with a pro move. The answer is L4, hitting white stones on the nose.

Of course, there may be psychology involved, for example, pro wouldn’t want to play obvious move because it’s obvious for opponent too. And they wouldn’t want to let the opponent to prepare for the move home. So pro needs to come up with creative move that wouldn’t be their opponent’s first choice. 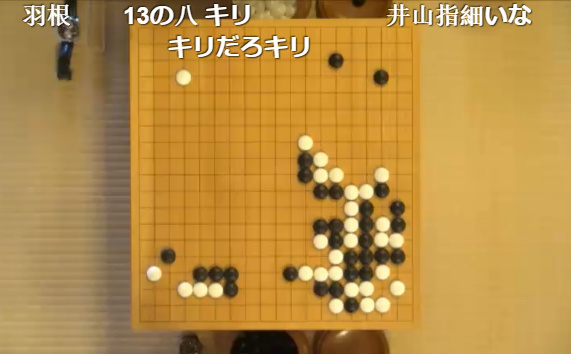 How I see it:
I would have picked N12 too… However white chose to play O10 rather than a better shape at P11, probably to combine with M12 and threaten M9. Now black is looking for a way to protect the cut at M9 and then play N12.

Woah! Now that’s a sealed move! It seems to me that Black idea is to force the weak white group to move downwards onto the side of the board a couple of times as Black makes a wall from the sealed move stone. Then, Black will atari the one stone next to his full triangle, thus connecting his weak group into a productive structure. White will be allowed to fix the cut above hims empty triangle in gote.

Alternatively, Black will instead make the cut above the empty triangle instead of atari’ing the one stone – probably the better choice.

Ready to emberass ourselves again? 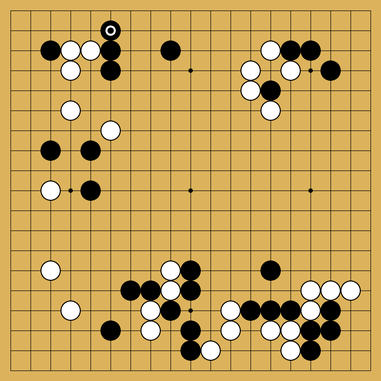 N3. It seems like White’s whole L-P group is dead, but I must be missing something. This whole game is frankly baffling.

White’s whole L-P group is dead, but I must be missing something.

White can either live or escape, black’s shape is too weak to prevent both.

I can’t tell the Life status of the bottom right corner… depending on that, either M5 or a move in the corner to secure life. Maybe S4?

Ah, I have at least the satisfaction of knowing, per mlopezviedma in the chat box, that LZ picked N3.

fortunately for me the game is guess what the pros will play not guess what the bot will play haha but I still think that N3, although forcing, doesn’t kill the group and that the bottom right looks to be in more trouble if left unattended.