Let’s play a different game. Guess pro move game. Today Iyama Yuta as Black played Yamashita Keigo. And since the game lasts two days, last today’s move was a sealed move. And we have an opportunity to guess what Yuta played!
Here’s position, Black to play: 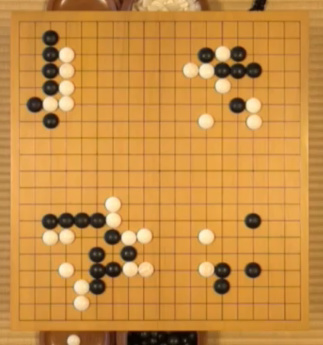 My thoughts:
All black groups feel strong to me, so nothing urgent. Any follow up at the bottom seems gote and not very big, since black can’t make any points there and white is undercut from both sides anyway. And D13 seems important for both, otherwise white can keep black low and build something quite big at the top.

This would have been my serious answer, but I couldn’t pass up the above opportunity

LOL, I really can’t imagine how a pro chooses a move.

I would say P15 to avoid being surrounded in the corner… or maybe O6, make good shape.

These are both advices from Dwyrin’s Basic series.

My first instinct would be something on top, along the lines of M17, but none of that is ends in sente to deal with the left side. D13 looks honte, but unnecessarily strengthens white toward the center. Q10 seems like a calm move but allows w pressing on right side and closing off the center toward the right, so I’ll redden Yamashita’s nose with E11.

E10. Body is clear (Darn interface forcing me to type a sentence!).

I think it’ll probably be D13, like Adam says. But F10 also looks like it could be playable – perhaps by being a little more aggressive, Iyama could threaten a greater shift of territory from the centre onto his left side…

I’ll be rooting for Yamashita; he’s the most exciting player of his generation.

I think it’ll probably be D10, like Adam says.

I’ve seen several people suggested D13 and now I can’t think of any other move. We have weaknesses around C13, and I don’t think we can fix any better way.

Three moves came to mind right away, and I really don’t know how to judge which is the best: (1) hiryuu’s move, E10; (2) K17, because I’m worried about W getting a big moyo up there; and (3) R10, which is my final choice. I suppose I’ll find out it’s a very kyu-ish move—so be it, I do like pounding my stakes in unclaimed territory…

Sorry about that. It is hiryuu’s move, E10, that I first thought of. I will edit above.

Sorry, I meant D13. Thanks for correcting me on the typo.

BTW, one of my favorite go web sites (“Find out the move”) embodies this game. It features famous pro games in which you guess the next move (focusing on one of the pros). Four usually good alternatives are offered, which gives some guidance in thinking about the position and makes one think about why one move is better than the others. Downside is there is no explanation—but it is stimulating. See https://www.youtube.com/channel/UCBu-wYPCgI9iLLXZN9c-N_A

I guess we are no match for pros. Yuta played F10, so @bugcat was the closest. 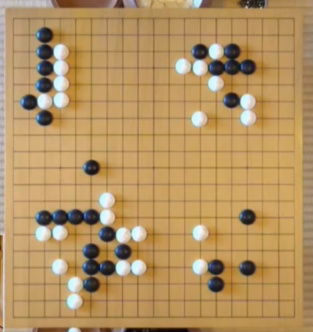 so @bugcat was the closest

Well, not that it matters too much, but credit where it’s due… Technically, Conrad, Hiryuu, and Smurph were closer?

although being close is usually not enough in Go

I meant that bugcat is the only one who at least mentioned the move as an option. But yeah, we all lose.

To be fair, my F12 move was also close