You raise a valid point; I have altered my previous post accordingly.

1 week seems fine to me. Those that don’t actively follow the thread will have time to check back and enough new guys can hop on. 3-4 days is of course even better but that means more work for you, or if you pass it around, more cooperation and potential delays.

Friends, your guesses were:

Thanks for all your guesses and interesting commentaries!

Picking OSR game is a nice way to get a game where both players try to win seriously. And probably we can let them in on our little game, since they both know English and want to improve. Don’t you think, Adam?

Funny, Black were afraid of the snapback which wasn’t even snapback. And even if it were a snapback, they didn’t fix correctly.

This game was conventional enough for strong players to see through it.

Edit: One more thing. As you can see, most of the answers come in in first 24 hours or so, so I doubt longer round would do anything.

3 posts were split to a new topic: Guess next move game

Hey, hey, hey, let’s not forget our little game. Now I chose the game pretty much randomly among games between equally ranked players and that lasted more than 100 moves. Game took 55 minutes, so players thought about their moves. 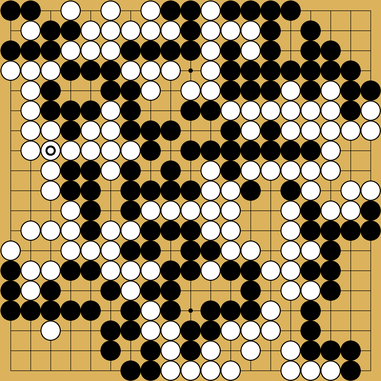 The players correctly follow joseki for many moves in the upper left corner, suggesting at least a low SDK rank. On the other hand, isn’t Q3 inferior to R4 because it gives W the long side? Even more important, it seems that W handles the lower left fight very badly, and the LMN area near the top seems badly handled by B. Finally, the general lack of tenuki makes me think these players are weaker than one might at first suppose. I’m going to guess 5k by players who have done some serious joseki study.

Despite some big blunders, they played reasonably well. I’ll let you guys guess the ranks for now, but I’ll say that N16 spoiled a good game for black. Surprisingly bad move, compared to how the rest of the game was played.

This looks like a game I would play except for a couple tesuji and the avalanche. I’d say 4-5k.

hmmmm, comfortable with double hane, capable of sacrifices, yet calm in some moves, and appareantly very aware of potential kos… My guess would be they are above my level, and I am going to go as far to say almost dan.

I am guessing 1k.

Well above my level, I think 2k.

Well, they play a large avalanche, and that’s still not played at my level (4 – 5k.) But their play is poor in the bottom left, and I don’t think that they are stronger than I am. So I’ll guess 4k.

Personally I only know this variation of the large avalanche (and that not fully): 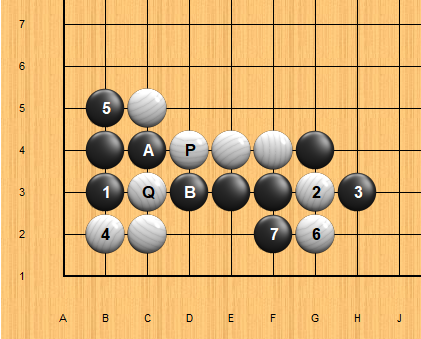 so I couldn’t say whether or not they play their variation correctly.

My guess is 7k. I think I’ve faced several OGS 4k’s that played much better …

I’ll say it was a 12 kyu correspondence game. Consulting joseki dictionaries is permitted in correspondence games and apart from the avalanche the rest of the game feels very DDK.
Edit. Whoops forgot the game took 55 minutes, even so I’ll keep my same guess and reasoning.

You could play a correspondence game in 55 minutes

true… i hadn’t thought of that haha

They are worse than 5k for sure (they usually follow things that are happening around the area instead of playing big moves. Not to mention the lower right - you rarely ignore that pincer) - I would say 7k .

And the k16 tesuji (m290)? Playing there without actually capturing the black stones… That’s some dan magic