What a weird opening… And both players keep playing tenuki all over the place. It reminds me of some of the weaker bots, they’re also playing Chinese, which makes that a likely thing.

Thought I’d join in on the fun and provide a game to guess. 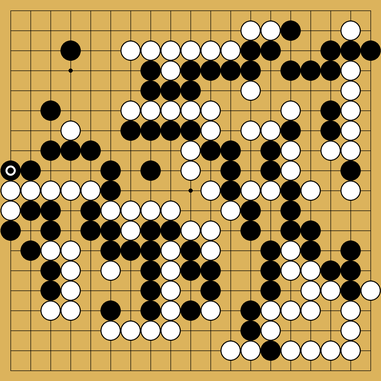 Alright, then I shall reveal the previous game.

And the answer is…

Woah! That’s so interesting. Do you think this means the “kosumi shimari” is playable?

As a 12k, I have absolutely no idea

If you’re wondering why we all guessed really low, it’s because no reasonably strong amateur (sdk+) would play like that.

I guess “tenukis everything, doesn’t play joseki and plays non-conventional moves” means you’re either DDK or an above-pro bot.

so ddk may be closer to the truth than anyone else

Both players are humans, played on 2014 (so no strong bot at that time)

I’ll say 7k. Nice shapes a lot of the time, but too greedy.

hmmm… looks like a game between two low dans/high sdkyus that are bored and having fun. I wouldn’t expect mid-low kyu to have tactics like that. I’ll go with 2dan? also bugcat, the game I linked was between two tygem 4dans so somewhere around 2dan other servers. nice guess!

I like this guessing game, but as a 12kyu I can’t really tell how Dans play.

I would be surprised if DDKs had played the sequence from Move 6 to Move 13, since that (whilst simple) has an SDK / dan look about it shapewise.

Move 14 seems pretty awful, though, so I’d struggle to say dan, and then White plays a lot of bad exchanges on the right side.

White also seems to play quite badly in the top left corner. Overall the game is hard to judge since I feel that Black should be higher-ranked than White in this game.

Thanks for the detailed post, but maybe my question wasn’t asked correctly: I know the ranks, I don’t understand the “low” and “high” as mentioned here. Low/high stands for number or hierarchy? It’s not used consistently and I’m confused.

Different people use it in different ways; I can’t help you

People and ways… Every problem can be traced to those two, ugh.