HELP : So damn confused in Eye! 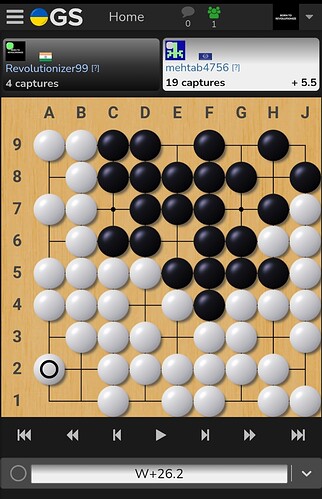 THE LOGIC ABOVE CALCULATION IS BASED UPON :-

𝘌𝘺𝘦 : 1 Empty Space (intersection/group of intersections) that is surrounded by 1 group from all 4 sides (left, right, top, bottom) is called 1 eye. Surrounding from Diagonals ain’t necessary.

𝘌𝘺𝘦 𝘊𝘩𝘦𝘤𝘬 : IF 1 Empty Space (intersection/group of intersections) is surrounded from (left, right, top, bottom) by 1 group then 1 eye is found.

No one is about to kill anyone.

Note that the goal of the game is to have the most territory+prisoners.

Every intersection which is not covered by a stone is going to be a point of territory for someone, with the exception of C7 which is a neutral point. I suggest playing neutral points at the end of the game, to make it more visually clear that they’re no one’s territory.

Note that the main goal is typically said to be to have the most territory. Prisoners tend to be a smaller fraction of the score. In this case, White’s score appears to come mostly from prisoners, but that’s only because Black played many aimless moves in White’s territory, so White filled their own territory capturing all the black stones, which doesn’t change the score.

If you had ended the game a bit sooner, then it would have been more clear that White won because of a large territory, not because of prisoners: 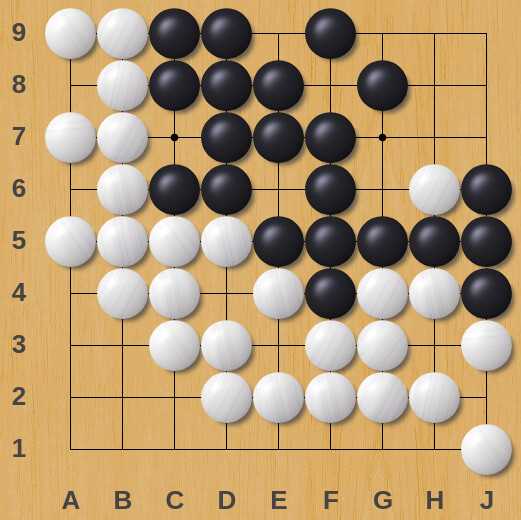 I think @Revolutionizer99 might be trying to clarify in their head what counts as an eye and what doesn’t.

𝘌𝘺𝘦 : 1 Empty Space (intersection/group of intersections) that is surrounded by 1 group from all 4 sides (left, right, top, bottom) is called 1 eye. Surrounding from Diagonals ain’t necessary.

𝘌𝘺𝘦 𝘊𝘩𝘦𝘤𝘬 : IF 1 Empty Space (intersection/group of intersections) is surrounded from (left, right, top, bottom) by 1 group then 1 eye is found.

But this definition is not correct: 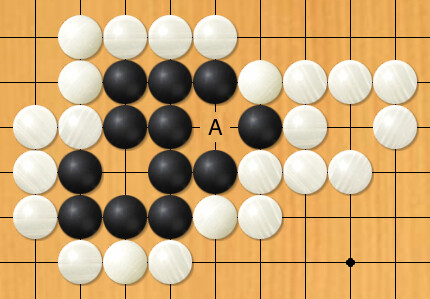 the point at A, for example, is surrounded on all four sides by Black stones, but is not a real eye, as it can be played by White, atari’ing Black in the process. The Black group is dead, unless White somehow lets its surrounding stones be captured. The point at A is what’s called a “false eye”.

Basically the question you need to answer, to know if a hole is a “real eye”, is:

Can the opponent play enough moves inside the hole to capture my group? Or is that illegal?

A hole that is securely and completely surrounded by one color can also be too big to be an eye. One of the smallest examples is this: 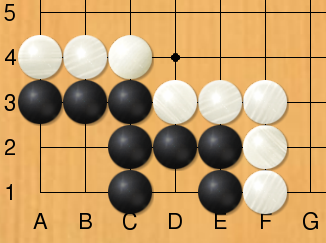 It looks like Black has two eyes, and virtually it does. Normally you wouldn’t expect this group to be captured in a game. But it can technically be captured if Black doesn’t react: 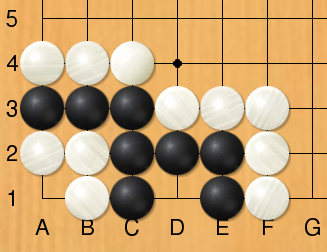 Now Black is in atari, and if they don’t react, the group can be captured on the next move by White.

Now in this case Black can react when atari’ed: 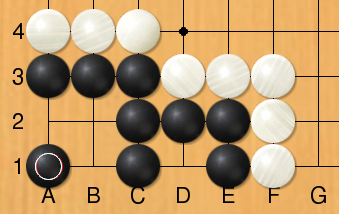 But in other cases the hole might be too big to even do that: 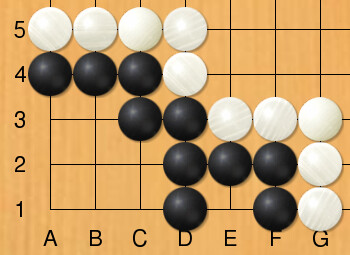 Here, if Black thinks “whatever, I’m alive, I have two eyes”, it’s technically possible for White to not only atari from the inside, but even make life inside! 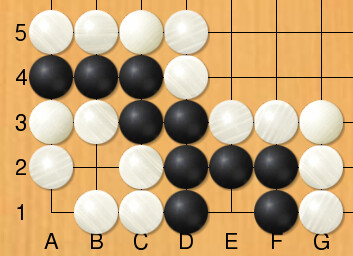 in this case, if Black doesn’t prevent this from happening, it’s not even possible for Black to survive after being atari’ed.

If the opponent can play enough legal moves inside one of your “eyes” to put your group in atari, then it’s not a real eye.

In practice, in intermediate and higher level games, most eyes never become “real eyes” in this strict sense, and saying that a group is “alive” usually means that it is virtually alive, as in, a good enough player has the ability to defend it no matter what.

But I think it’s good to be aware of these subtleties, and as a beginner, to start working your way up from these very concrete foundations.

A more practical and useful guideline for a double digit kyu might be:

If the opponent is as good as me, can they capture this group?

If the answer is “no”, it’s probably good enough for now. As you face opponents with different experiences and stronger, and as you practice tsumegos harder and harder, you will learn that some of your ideas were wrong, and your understanding of when a group is alive will gradually expand and improve.

But then again, I’m barely an intermediate player myself, so someone more experienced might chime in and disagree on what I said! 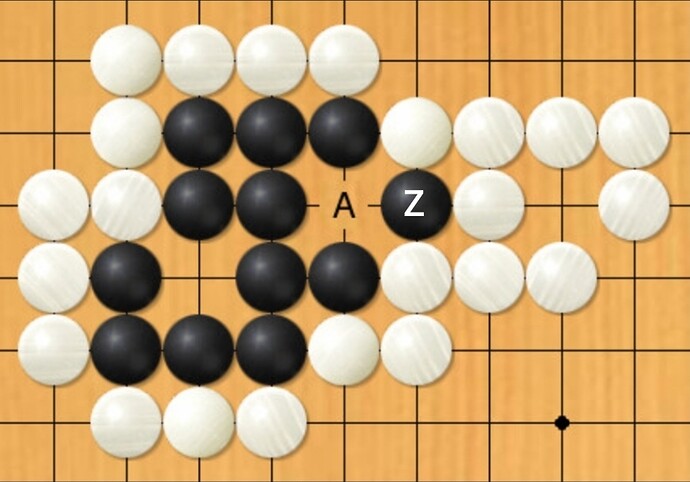 “𝘎𝘳𝘰𝘶𝘱 𝘰𝘧 𝘚𝘵𝘰𝘯𝘦𝘴 = Stones which are Connected together HORIZONTALLY or VERTICALLY.”

If my understandings of a group is correct then StoneZ should NOT be a part of that group, right?

That’s not clear, since we don’t use any definition of how many eyes might be
possessed by a group consisting of more than one chain. ​ Chain at Sensei's Library
(Once a set of stones is immortal, it wouldn’t matter whether it has just 2 eyes or instead 100 eyes.)
​
​
Also, the logic your calculation is based upon gives sufficient conditions, but not necessary conditions.
For example, see the ​ Second,Third,Fourth ​ corner group from
Smallest Group with Two Eyes at Sensei's Library : ​ ​ ​ White can never play inside them.

D4 and E3 are unconditional eyes too, and all the empty spaces in the upper right corner. Do you understand why?

I GOT IT. THANKS A LOT. I was thinking of eye as a group phenomenon but you guys made me aware that it is NOT.

yes sir, now i do

Eyes are a “group phenomenon”, just not all eyes are surrounded by exactly one chain of strictly connected stones.

I took the liberty of changing the category to “Strategy and Tactics”, since the “Support” tag seemed slightly off.

It is a bit hard to classify. Maybe this category should have sub-categories like “Basics”, or “Go Theory”, or “Life & Death” or something like that.

I SAID : “1 Empty Space (intersection/group of intersections) that is surrounded by

“𝘎𝘳𝘰𝘶𝘱 𝘰𝘧 𝘚𝘵𝘰𝘯𝘦𝘴 = Stones which are Connected together HORIZONTALLY or VERTICALLY.”

If my understandings of a group is correct then StoneZ should NOT be a part of that group, right?

Your understanding is good.

There was a slight confusion in communication due to vocabulary.

We tend to use the word “chain”, not “group”, for this concept.

Note that the difference between true eye and fake eye can be slightly more subtle in some edge cases.

Really, a fake eye is something that looks like an eye, but where eventually your opponent can capture some of your stones, or force you to fill your own eye to connect those stones.

In many cases, this definition coincides with the definition you give, but there can be edge-cases. For instance, here are a few examples where black has either a true eye or fake eye at F1. For every example, can you tell whether F1 is a true eye or a fake eye?

Note that in 4., black has two chains of stones: the chain E1-E2-F2, and the chain G3-H3-H2-H1-G1. The eye at F1 is a true eye, even though it doesn’t completely fit the definition your gave earlier.

alright sir, i now understand the difference between chain and group. But ur argument should be We tend to use the word Group not Chain for this concept.
Why did u say the opposite?

We use the word “chain” for the concept defined by the rules, of stones which are truly connected by being directly adjacent.

“Group” is a concept which is completely useless to determine whether an eye is a true eye or a false eye.

For instance, in diagram 3, we’ll say that all black stones are part of the same group, but there are two chains of stones in the group; the stone at G1 is not perfectly connected to the chain of the other stones.

All doubts cleared! thanks a lot sir

Here is a helpful Sensei’s library article: Recognizing an Eye at Sensei's Library

Some other interesting shapes: 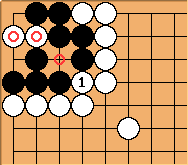