Just what it says on the tin. There’s no urgency or anything, but it is a little annoying.

Could you take a screenshot to help explain? What exactly do you mean by “hotbar menu”? On the main site or forums? Does this affect mobile, desktop, or both versions of Vivaldi?

Just did, whilst feeling very dumb for not having done so immediately.

This is on desktop.

The relevant area is inside the red rectangle. 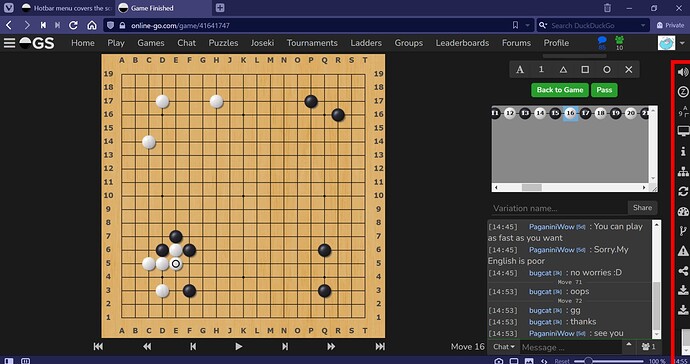 It seems to me that the problem could be easily solved by placing the menu bar on the left instead of the right, since scroll bars are (correct me if I’m wrong) always on the right.

But this is only a suggestion and, as I said, not at all urgent.

By the way, I tested that this overlap occurs both in and out of fullscreen.

Thanks for clarifying. I was originally thinking that you meant one of two other completely different menus.

For that game page, it seems that scrollbar maybe should just be hidden altogether, since it is in this landscape layout, where you cannot even scroll that entire page (as the content height is equal to the window height)

At least on desktop Vivaldi, this is not the case. Notice that the screenshot doesn’t show the players, their profile pictures, or the AI graph. I have to scroll up to view them. This scroll bar is functional.

Also, I can’t scroll using the up and down arrow keys since OGS has bound them to some other function. For instance, pressing the down key in a completed game enters analysis mode.

I just checked the page with Pale Moon, which is an offshoot of Firefox.

The menu still obscures the scroll bar, which in Pale Moon’s UI can’t even be accessed without entering fullscreen view. This leads me to suspect that the problem also occurs on Firefox.

What browser are you using that this issue doesn’t occur on?

Attached: fullscreen view of the page on Pale Moon 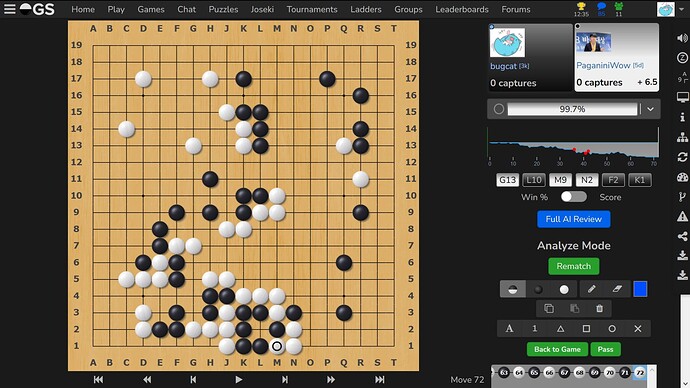 Whoops, sorry about that, I had not reproduced the issue correctly, since I was trying with a different game with the content fitting a bit differently.

I tried a bit more with a different game, and could reproduce the situation on Chrome. My original understanding was incorrect. It is not a scrollbar for the entire page, which does not scroll in landscape mode, but a scrollbar for just that subportion of the page.

It seems that the issue should be addressed and there are maybe a few a different things to consider.

Actually, while just exploring this issue now, I realize that there is another issue with that menu: if the window height is too small, some buttons are inaccessible since it gets cutoff by the page.

This makes me think of one potential fix that could perhaps address both of these issues: instead of having the menu by attached to the side of the page, which does not scroll, perhaps that menu could be encapsulated within the div that it overlaps. Then, it could reside to the left of the scrollbar of that div (if it necessary to be shown, and that menu would also scroll along with that div, making all of the buttons accessible on smaller page heights.

What browser are you using that this issue doesn’t occur on?

Sorry, I was originally checking with a specific game page and window sizes where that issue was not manifesting, since a scrollbar was not needed. I have since been able to reproduce on other browsers.

Here is a screenshot of the other issue with the menu: 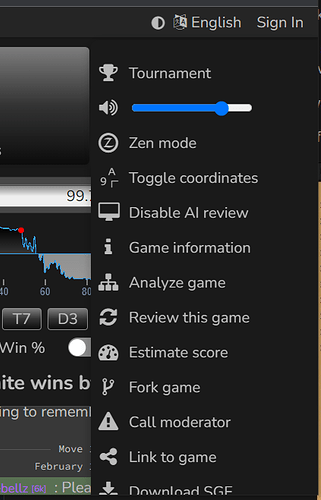 The height of this image is showing the entire height of a very short window. In this case, not only is the scrollbar fully covered, but this side menu is cut off making some buttons inaccessible. Only the “SGF with AI review” button is completely cut off here, but adjusting the window further can cut off more buttons, and other situations could have more buttons.

I think that making the menu live within that “right-col” div, instead of floating above it with “fixed” position styling, could possibly alleviate both issues. Then, when a scroll bar is need, the menu would appear just to the left of it, and the menu should scroll along with the rest of the “right-col” content in order to ensure that the lower buttons are always accessible.