How do Tournaments Work?

I’ve never participated in a tournament on this site before, so I’m not familiar with how these work. I was looking at the tournament info page, but some things left me confused.

Can someone help explain how the various tournament structures work?

Are there also non-simultaneous round robin tournaments that just last P-1 rounds (where P is the number of players)?
What does “qualified places” for Swiss tournaments mean?
What are the player “pairing methods” (the link on page seems to be broken)?
Why are “upper and lower bars” used in McMahon tournaments to seemingly put lower ranked players at a disadvantage?

Both Swiss and McMahon are pairing systems; they’re used to decide who plays against whom. Basically, players who are close in points are matched up against each other.

In Swiss pairing, it’s possible for the strongest players to beat on the weakest players resulting in multiple people getting perfect records, resulting in tie breaks determining who wins. McMahon was designed to avoid that situation.

The idea with McMahon is to help expedite the process of actually finding a winner. Basically, the higher ranked players are expected to win, so they’re given extra points and start off playing against each other earlier on in the tournament (because players who are close in points are paired with each other).

I don’t think non-simultaneous round robin tournaments are possible on OGS.

Swiss and McMahon are not strictly pairing systems they both have pairing components but that’s only a part of it.

Our basic Swiss and McMahon tournaments all pair the same way which utilizes the McMahon strength and points based pairing with some other logic (preventing the same players from being paired in further rounds… favoring alternating black and white if possible… etc). We have more pairing options coming in the near future.

As @Jamada said… McMahon tournaments are designed to make sure that players are matched and group based on their skill to eliminate or reduce really lop sided games.

Hi,
What is the “number of qualified places” ? I want to calculate the number of rounds in our tournament (https://online-go.com/tournament/33696). At present we have 19 participants. Hoy many rounds do we have to play?
Thanks in advance.

Yes, but I didn’t understand how to get the “number of qualified places”.
Regards

Apologies, if I seemed dismissive.

The post is quite old but according to what it says with one qualified place you get 5 rounds, with two qualified places you would get 6 and with 3 you would have 8. That is with 19 players.

I have no idea if that’s how it actually works now, hopefully someone else can answer your question too.

Oh yes, I wasn’t sure how the rounding would work, perhaps rounding to the ceiling makes more sense actually, seeing as the purpose seems to be to find a unique first place (of course that’s never guaranteed anyway).

Hopefully a dev will chime in

I am necroing this thread because I had the same question and didn’t find a recent answer.

My question is: how many rounds in swiss mode?

Faqs are very elusive about swiss tournaments, maybe we could improve them with the above formula, which is R = (P + 7) /5 if nothing has changed in the last 7 years (???)

Well, looks like that tournament ended up with 7 rounds.

I have a guess at the real answer here:

What are the player “pairing methods” (the link on page seems to be broken)?

Now that we’ve maybe figured out number of rounds for Swiss tournaments, who wants to talk about pairings? 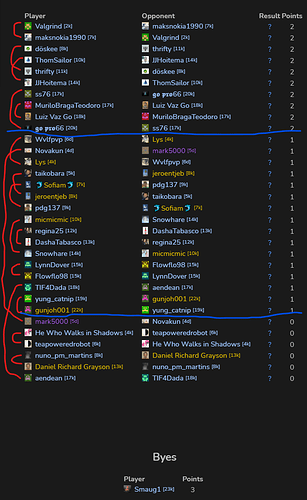 This is the “strength” pairing from Round 3 of my tournament, which just started. I had expected neighboring players to be matched up, possibly with minor adjustments to avoid repeating pairs from previous rounds, but I have no idea what algorithm could have caused it to come out like this. 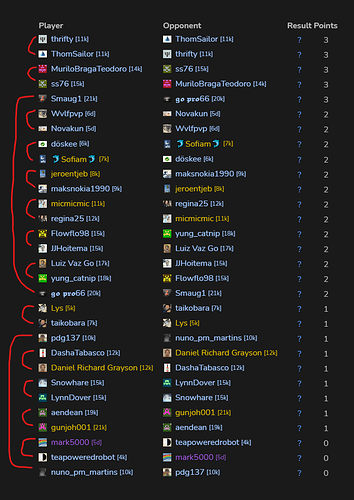 It seems like it’s mostly trying to pair people by their tournament rank as desired, but for a few of the pairs it glitched and reverted to pairing by our listed OGS ranking instead.

Do we have a bug tracker to report these stuffs?

OGS has a github repository, where you can report bugs.

Round 5 gave me an idea about how strength pairing works. Note that I’ve divided the players into “groups” by points. 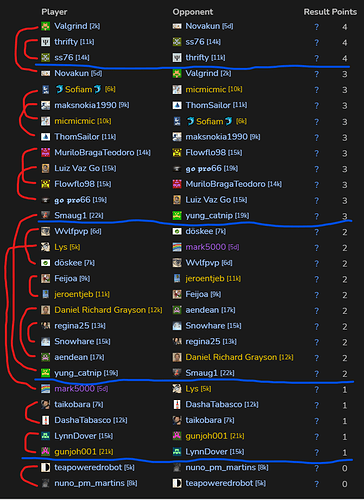 First, the close pairs of crossed lines (in the 3-point group) came from players changing rank over the few hours since this rounds started and when I grabbed the screenshot. So don’t worry about those.

But why is the #1 player paired with #4? And what could explain those huge jumps for the Smaug-yung_catnip and Lys-mark5000 matches?

Maybe it works like this: starting at the top, the algorithm considers one group at a time, pairing closely-ranked players within the group. If there’s someone left because the group had an odd number of players, he gets moved to the next group down, but placed in order by sitewide rank, ignoring tournament points.

That explains the big jumps. But then how are players paired within a group? It seems like it might have to do with how close the ranks are, and maybe it tries to avoid repeating pairings from previous matches, but I can’t think of a story that would explain everything.

Thanks for the link!

It really ignores tournament points? That sounds completely counter to the idea of a multi-round tournament. Is the actual metric available somewhere?

There are big rank gaps in the pairs, like taikobara [7k] vs. DashaTabasco [12k] - with 8 other players between them in sitewide rank, isn’t it really unlikely that they would have been matched up, unless we were doing it according to tournament rank?

Edit: here’s what the pairings look like, ordered by sitewide rank at the start of the round. It’s a lot more mixed up this way, hard to believe that could be an optimum pairing: 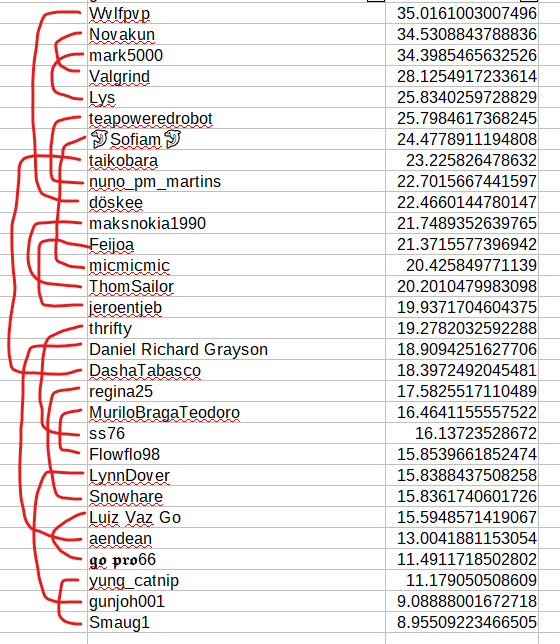 I was looking at the tournament info page , but some things left me confused.

Please join me in welcoming our new moderators! OGS Announcements