How does this get scored (Japanese)? 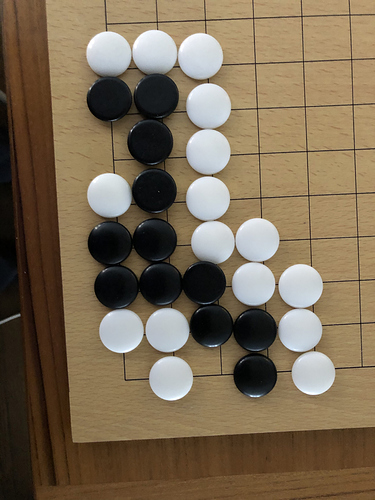 Can anyone tell how to score this when it is the end of a game? Neither player can play so they leave it.

Japanese ruling gives no points for eyes in Seki, so the corner is 0 points territory for each player. But black can still capture the single white stone, so it’s 1 captured stone for black (which is worth 1 points).

In fact, black has to capture the single white stone before the game ends:

Compulsory Capture of Dead Stones In most situations, the Japanese rules compel players to pass before capturing all strategically dead stones, since playing additional moves to actually remove dead stones would reduce one’s points under territory scoring. For example, consider the following position. [dead%20stone] In this corner, black has 4 points (3 from territory plus 1 for the white prisoner). However, if black were to play an additional move here (at the end of the game, when they shoul…

Just out of curiosity, how would that get scored under Chinese rules?