How does this undo feature work?

I’m playing doge_bot_4[8k] which said:-
“Undo will be accepted. You can send undo message if you need.”
I sent the following messages:-
undo
Sorry - misclick.
Undo please
? How do I do this???

For future reference (this game timed out while I was trying to work it out) I would like to know how this is supposed to work.
Can anyone let me know please?

You probably need to send “undo” to the bot.

AFAIK those bots cannot do undos, i think that message isnt correct. I might be wrong tho.

Seems like an easy enough claim to test haha…

Edit: @bobinski this is the button you have to hit 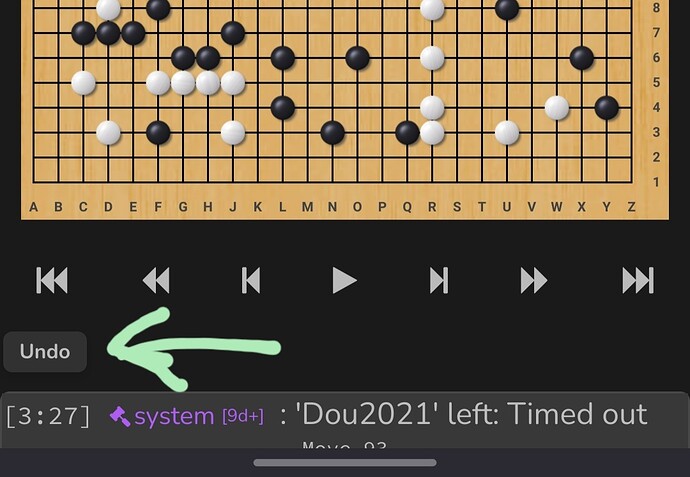 It works, but it’s virtually useless since the bot plays too fast to realize you misclicked.

Edit2: Oh if you send the bot “undo” in chat it will request undo. Then you accept the undo and request another undo yourself. Very nice!

Oh if you send the bot “undo”

Are you saying you need to send the word undo in quotes for this to work? Because:

I sent the following messages:-
undo

No without the quotes

The normal undo behaviour is: a player can only push the undo button until the opponent plays a move.

If your opponent is too fast you don’t have time to push that button.

So the procedure with that bot should be:

It’s quite complicated but you can’t undo two moves at once.

Now we must figure out what went wrong in your game

All this faff would be avoided if OGS let you request undo on your move, like every other go server. I’ve asked for this feature for years.

Currently you can ask for an undo after you have made a misclick and it is your opponent’s move. But once they play their move, which can happen quickly, you can no longer ask for an undo. You should be able to ask for undo on your move, and if the opponent grants it is undoes their last move and your last move. This is how undo works on other servers. To workaround this you have to resort to the chat box, but this is fraught with difficulties like people not seeing the chat, speaking different …