How is this a seki?

In Mr komi’s tsumego puzzle Beginning shapes, he has you trying to create a Seki on puzzle 21. I made the Seki, but am having trouble figuring out how it qualifys as one. Can someone help me figure this out?

Do you have a link to or a picture of the problem? It’s even harder for us to figure out without one.

EDIT: I found it 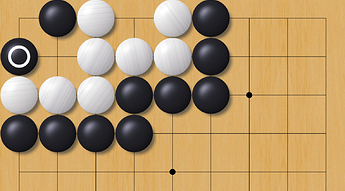 Good sleuthing there yebellz. Can you help me understand your conclusion?

White has a two eye structure in place. They own the territory. Black plays two stones in there, but who cares? They are not a threat to White. White does not have to respond, because White already owns that territory. If White does nothing, the White shape survives, and Black merely has two stones sitting inside enemy owned territory.

Those two stones are dead, are they not? If Black plays a third stone, White easily captures Black’s group and Black cannot harm White by playing further moves within that top corner space. How is this a seki?

There’s not really a meaningful thing as “a two eye structure”.

Either you have two eyes or you don’t - and an eye is a set of liberties that lead only to other like-coloured stones or the side of the board.

In fact, white does not have two eyes - white only has one.

White’s one-eyed group has no other liberties that don’t lead to black stones.

This is another way of describing the result which is that if white plays at 2-2, to take black’s stones, white dies. That would not happen if white had two eyes.

Generally, stones inside potential eyespace have to be able to be taken. If they can’t, then it’s not an eye.

I hear everything you said… but I still do not understand how this is a Seki. If White does nothing, the White shape survives, and Black merely has two stones sitting inside enemy owned territory.

Or is the point that you are making is that White has never once owned that territory in the above example? Your explanation about that not being a two eye structure violates everything I’ve ever understood about what qualifies as a two eye structure.

f White does nothing, the White shape survives, and Black merely has two stones sitting inside enemy owned territory.

At scoring, black will say “prove to me that those black stones are dead”

White will not be able to do that.

The territory is only “enemy owned” if all stones inside are dead. The two black stones are not dead, since white cannot kill them, thus it is not “enemy owned”.

If White does nothing, the White shape survives

This is exactly what a seki is: dual life. Both black and white are alive and cannot be killed.

I think there is a problem with the puzzle statement, though. If white is ko-master, they can avoid a seki: 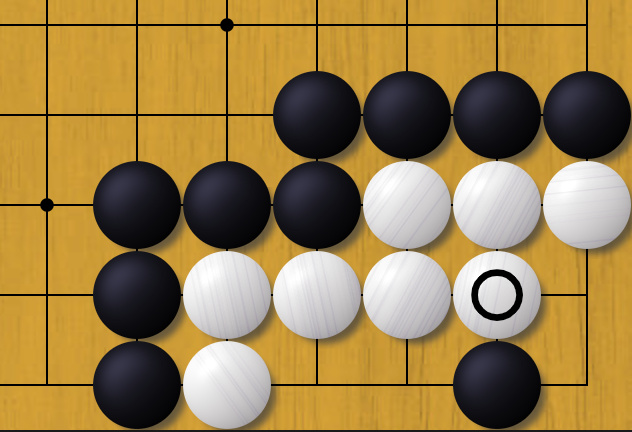 So the puzzle statement (“black to make a seki”) is a little bit misleading.

I’ve spent the last hour digging through pages and conversations at Sensei’s Library on the topic of Seki. I’ve seen a ton of stuff and I feel like giving up, because no matter what I read or what you fine folks have shared with me, this situation on this board really strikes a nerve.

@GlacialNoivern suggested that I come at this from a different angle, instead investigating what constitutes a dead stone. So I headed over to the Chinese rules and did a quick search. I immediately found this:

8.1 When the game is finished, by agreement of both
parties, all un-removable stones are living stones.

Obviously, those two stones cannot be taken. Which is what you guys were telling me all along. I don’t know what the issue was with my understanding, but I now see the light.

Thank you GlacialNoivern for teaching me something new (this question resulted from a disagreement we had on the Go Problem). I didn’t listen and I owe you an apology

Thank you all who have helped here tonight. I sincerely appreciate your time and expertise

It’s crazy how we can continue to learn even the “basics” isn’t it!

I think there is a problem with the puzzle statement, though. If white is ko-master, they can avoid a seki:

Haha that is funny

It’s crazy how we can continue to learn even the “basics” isn’t it!

Those two stones are dead, are they not?

Maybe this could help too: those two stones make an eye.

A common situation in seki is: both players have a group with just an eye and those groups share the only last liberty.
In this case 1,1 is black’s eye. 1,4 is white’s eye and 2,2 is the shared liberty.
So, no, those two stones aren’t dead. They are at least “as much alive” as those eight white stones.

Does this make sense to you?

I think that pointing out that the “contained” stones have an eye is a fantastic “revelation”.

Because they are totally disconnected from each other, sitting there in the corner, it is not at all obvious.

If this was a white eyeshape in the middle of the board containing a black eyeshape, I bet it wouldn’t even be a question…

Your explanation is really good. I think that is what I struggled with last night, is understanding that Black had formed an eye shape in the corner. Two seemingly unconnected stones couldn’t possibly form an eye, right? That is how my brain was seeing it. I think your explanation would have produced the “ah-haa!” moment I was seeking last night. Very well done Lys

Groups need not be connected to form eyes. Here’s another more common example:

Another one in the corner:

And a double one (I don’t know where I saw this one, or something very similar, but I find it quite a fun shape; both of black eyes appear to be false eyes, but they’re not): 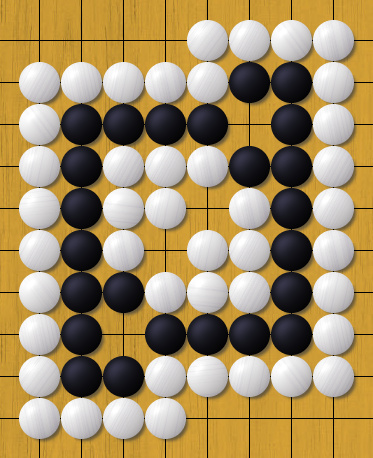 That last one is most awesome

appear to be false eyes, but they’re not

Some even call this formation “false eye life” 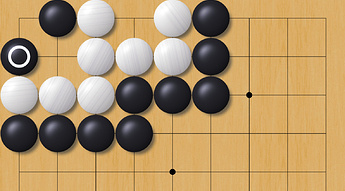 I don’t think of Black’s eye as false because even though Black doesn’t own the shoulder point (2,2), White can’t take it.

We usually imagine that to have an eye in the center requires control of three shoulders, two on the edge and control of the one in the corner but I believe in all cases it is sufficient to have that number denied to the opponent.

I don’t mean that position. I was only referring to the two-headed dragon position that was shared by @Vsotvep