How long lasts a correspondence game?

I would like to know how long on average a correspondance game 19x19 lasts.
With some common setting like for ladders, automatches, AST or your personal preferences.

Anyone interested in statistics (if this is possible), or anything already published somewhere?

Estimation or personal experience as well as statistics on datas are all welcome!

For me anything from a few days to about 6 months. There would be outliers beyond that. I tend to only play “fast correspondence” tournaments. But even my “through the ages” games only lasted about 6 months.

When I did some +4hr increment ultra-fast correspondence games, I got 7 games that all finished without any time outs. Here are their lengths:

I’ll look into the 27M database, but I didn’t save details about time settings.
I should have some flag about ladders and tournaments though.

Asking me? IIRC, my longest corr. game so far lasted for over two years

Good pick, thanks.
Thanks for everyone own experience too. 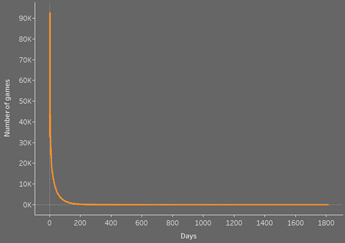 Longest game was 1811 days.
As you can see the curve is very flattened after about 200 days.
Here is the detail for first 30 days. 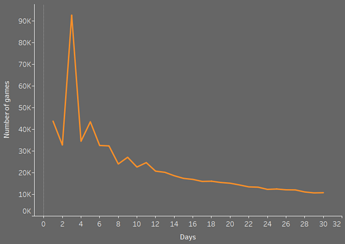 image747×529 29.8 KB
Looks like there’s a peak at 3 days and the rest of the curve is quite smooth.
This is quite different from chart linked by @Allerleirauh , I don’t know why.

This is when we pick only ladder games (game name contains “Ladder challenge”): 146’352 games. 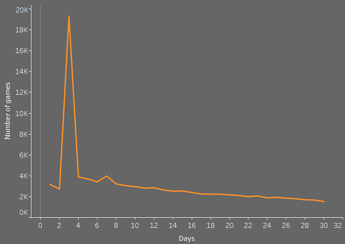 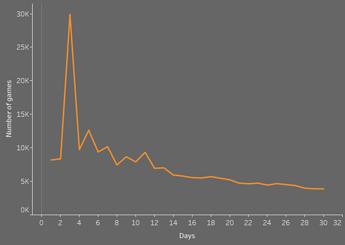 The big picture is the same: a peak at 3 days.
I’m quite suprised by this result. It seems like there’s a lot of fast correspondence players which are able to complete a correspondence game in three days!

The big picture is the same: a peak at 3 days.
I’m quite suprised by this result. It seems like there’s a lot of fast correspondence players which are able to complete a correspondence game in three days!

Did you exclude annulled games? Pretty sure 3 is when non-moving games time out?

These are the time controls for a ladder game, meaning if you play enough moves to get it ranked on the first day and then abandon it not realising it was corr, they would all end after 3 days too…

Pretty sure 3 is when non-moving games time out?

Correct!
When I keep only scored games and resigned games (excluding cancellations, timeouts and so on), only 683’028 games remain and the curve becomes even smoother! 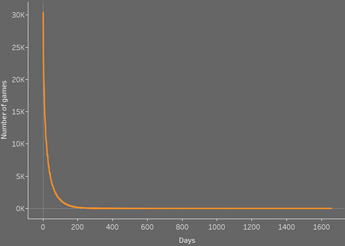 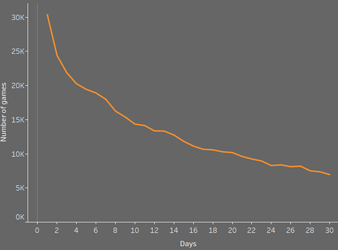 This is just tournament games: 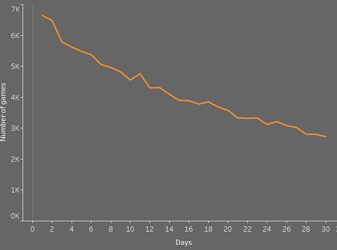 This is just ladder games: 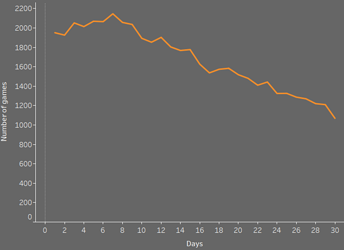 Well, if you want to try to reproduce that graph. Plot in log (that’s most significant), in seconds, maybe don’t remove <24h games or maybe do. How about that.

Plotting in log makes sense, after all, finishing a game in 1 vs 10 days is a big difference while finishing it in 400 vs 410 isn’t. But on linear graph it’s the same.

I can easily change scale to log but it won’t change the curve shape. It will just shrink it horizontally. 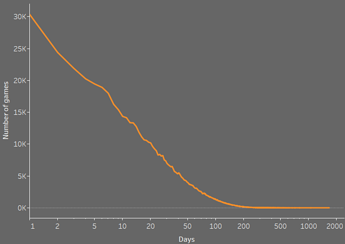 Technically they are both correct, but I wonder which is more meaningful. I feel like yours is a little misleading, since at first it brought me to think that more games end after a month rather then a week, which is false.

Yeah, I of course meant redo it with logarithmic bins. As I said, it makes sense to group together 400 and 410 while keeping 1 and 10 separate.

If you mean games that ended exactly on the 7th day vs games ended on exactly 30th day, I don’t think the question is good. When we say, oh, the game lasted an hour, we might mean actually give or take 10 minutes. Game took a week, it could be maybe 6-8 days actually. If we say a year, we could generously give or take even couple months. We think in relative values.

And the area is preserved, I think. So as you said, it’s easy to compare ranges, especially with helpful red lines.

To be honest, haven’t thought about it in a while.

Registered finally 20 ladder games as main dishes and a handful of rengo for snackies. Hope won’t be too much strain.