How many points of advantage needed to secure win?

Since we were talking about KataGos deciding the results of the games, I’m wondering how many points of advantage (according to Kata) one needs to be sure they’ll win.

Ideally we would build a function where you would put advantage according to kata (and maybe other variables like rank) and we get the frequency of winning in games where this advantage was reached. For example, for hundred points I assume we’d get like 99% because once such an advantage is reached a game would rarely be turned over. And for something like 5 points we expect frequency of winning be close to 50%.

And since OGS now has tons of reviewed games, I imagine we can actually build something like this.

I don’t know the answer but in this position 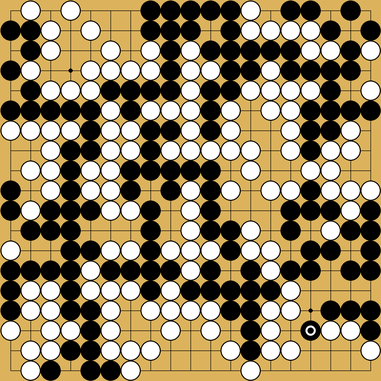 I was 41 points behind, and I won by resignation, leading by 78 points.

Exactly, and one’s gotta wonder, how rare is that?

It would indeed be interesting to see some statistics on this. Your point 5 is good to smooth out both players missing an important move. For point 3 I would suggest simply looking at games at certain move numbers, say 50, 100, 150, 200, 250 and an extra for 25 (because it’s quite possible to get 80% or few points lead by then and I bet makes little deviation on game result until mid dan). Time settings are also important factor. I’d be pretty confident to win an OGS correspondence game going into endgame with a 5 point lead (in fact I won many games when I was losing going into endgame), but a real life 1 hour game it’s not uncommon for me to have a 20-30 point lead in middlegame when I start overtime (as I’m a slow player) and then mess up in time pressure and lose.

How many points do you want in the opening to ensure a win? General Go Discussion

I was reading up on something and I got curious. I don’t want to reveal the purpose or what I’m looking at, although it may be obvious. I’ll post the results in a while. Anyway… Suppose you’re playing an even game against an opponent of equal skill. Say you’re around move 15 and nothing bad has happened yet. What is the minimum number of points would you want to magically gain in order for you to be able to say “it will be extremely difficult for my opponent to win now”? poll

Have you checked some KataGo win rate and score estimation graphs?? Your assumptions are quite inaccurate. Or maybe you are suggesting that we recalculate the actual win rates (in comparison to KataGo) from the actual data??

It’s possible to get a 99% win rate with a much, much smaller margin. 10+ is often enough (since KataGo assumes superhuman players continuing the game in its estimation), and late in the game, having just a few points of estimated advantage might lead to KataGo declaring nearly 100% win rate.

for something like 5 points we expect frequency of winning be close to 50%.

While the actual win rate (for humans playing out the game) might be close to 50%, KataGo would probably judge a much a higher win rate for the player with the advantage. For example, in this game, KataGo judges W+5.0 at move 41, but it gives an 83.5% win rate for White.

Just a guess, get into an end game, playing against a player on same rank, I need 20 points to secure the win. It needs to be a game where all my groups are secure.

And I think it is inhuman and wrong to let AI decide the game result.

Players don’t show up on time and play, they forfeit the game. This is true in any sports. I really don’t understand why Go online players are so sophisticated over thinking something else, especially using excuse of greater humanity, useless rank or even honor.

I think this depends very much on the ranks of the players and the phase of the game.