How much does resigning a game against a lower ranked player hurt my rating?

I’m in a game 19 vs 26kyu where the 26 only moves at near time out ( 3+ days). Will it hurt my rating too much to resign? I think they are trying to frustrate me by dragging the game out because they lost a costly battle early on.

You have another option, to pause the game.
You may then contact your opponent and see what’s up.

As for the rule on OGS side, you are not supposed to resign won games.

Maybe they really don’t have much time due to real life commitments. In any case, they are within the accepted time settings.
You can resign whenever you want, but I don’t see why, if they are indeed within the settings agreed.
There is no fixed number as to how much your rank will be affected.

You can resign whenever you want

Not really. Not if you have a winning position in a rated game, as this is at least disturbing the rating system and furthermore the first steps into sandbagging.

To answer OP’s initial question, 35-45 points, or about 1 rank. It should become irrelevant after 15 games, though, due to the sliding window.

To answer your question of whether to resign, it depends on how many games you play and how annoying it is. If you’re really annoyed by this, and play many games, then it wouldn’t hurt to resign. However, if you don’t, and you’re really concerned about your rank, then it may not be worth it. Your rank will be deflated by 1 rank for 15 games, and that may take a while. Also, consider your opponent’s rank, which will be inflated by the same amount for 15 games.

You can call a moderator if it gets too bad, and they will probably call the game for you. You probably shouldn’t do that just yet, though.

Edit: here’s the game in question. I wouldn’t call a moderator yet. 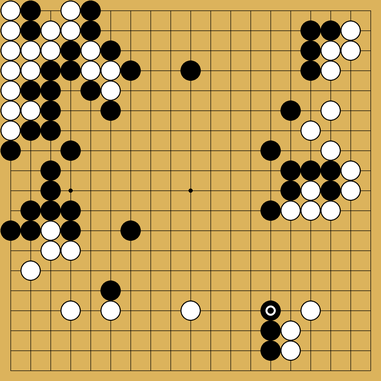 call a moderator if it gets too bad, and they will probably call the game for you

I have no idea who the other player is, and they may indeed do it on purpose, but let’s not get trigger-happy here.

They are within the time settings. Annoying and moderator-worthy are two things that we should be very cautious not to mix.

I agree. Looking at the game data and the move time, what they are doing is allowed. If they are going to time out, then there’s that. Otherwise, they are fine. Things that will warrant moderator attention:
Opponent starts playing clearly nonsense moves to avoid a time out. This may be hard to tell at the 25k level though.
Opponent goes on vacation but still plays live games. (I have done this once, so don’t take me as a good example. Just don’t do this).

Always give the opponent the benefit of the doubt. The “nonsense moves” may be actual legitimate moves; they might be busy in real life. Don’t call a moderator unless it’s too extreme.

Wait until your opponent decide to use up their entire 6 weeks vacation allotted for site supporter before losing by timeout.

Edit: by no mean say it’s privilege of site supporter only. Non-site-supporter have 3 weeks also T_T

I don’t want to sound pessimistic, but they are not back playing games yet (the supporter one). Maybe they thought vacation time would be enough to fix whatever life threw at them.

If this one game is annoying you and you can’t realign your thinking to not care about it. It’s better to resign.

Just resign. Your opponent is “within the rules”, and it won’t hurt your rank that much in the long run.

If you want to avoid this in the future, try different time settings or join a group where taking too long is prohibited (Fast Correspondence)

Some more related on this

Eh, this isn’t exactly a clearly won game. And OP is clearly not trying to sandbag

Hum ok still have some possible upset, who knows. After thinking why I told this (I should not interfere in a not finished game) I didn’t want to say then the game is won but I was just following OP view on his game (the lost of stones) and warning about undue resign. Sorry if any misunderstanding.
I’m not saying OP is sandbagging, I’m saying that resigning a won game may catch the attention of admins about sandbagging.

Some more related on this

Wait you mean “GG Easy” is not the only way?!

O I just thought this thread may give some thinking around his will to resign.

Now yes yes yes the game itself looks not finished and the time setting is the chosen time setting. It’s completely legal for the opponent to use it.

I would say that the opponent is doing nothing wrong here. If OP feels that a pace of 1 move in 3 days is too slow, he should just avoid games with 3 days per move in the future.

I mean, what are we even expecting here, 25kyu is the lowest labelled rank for the server, in a game against a 19kyu. If you’re wondering why a beginner won’t resign, that should be self explanatory, they are a beginner. They don’t know what a lost game looks like, and as a 19kyu, you have more of an idea, but still really no idea what a won game looks like. If you agreed to a game with max 3 days to make each move, then that’s what you agreed to, if you don’t want to play, then resign and take the loss.

But don’t think that people will play the way you want them to, It’s only 80 moves in, there is still a very large possibility you will screw up because the game is still so early.