How to calculate score in Japanese and chinese style?

I have tried reading posts related to this but still cannot understand how the game scores the player. 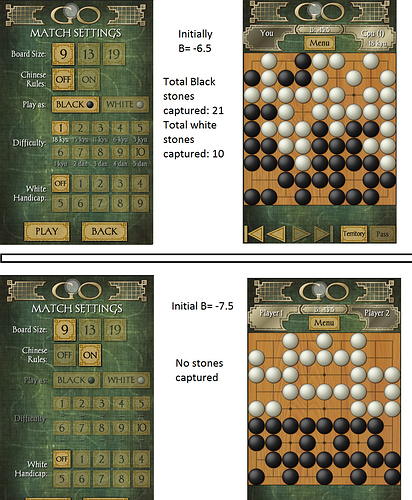 First, the initial -6,5. That is komi. In an even match, white is given 6,5 point from the start, to compensate for black playing first (which is an advantage of course). Thus in the moment the match begins black is losing by 6,5 because neither player made any points yet. The half point is to prevent draws.

In go (let’s talk japanese rules, but it does not really matter) you get points for capturing stones and above all surrounding territory. Black surrounded no territory and thus made no points.

Maybe you were thrown off by the minus. The app counts the score towards the player thus if you were winning it would still read the score for black, but there would not be the minus before the score

If you want to understand rules and basic strategies better try this:
https://online-go.com/learn-to-play-go (our own version)
Or this:
http://www.playgo.to/iwtg/en/ (tried and in depth and avilable in many languages)

Thank you. I did understood the rules but not the scoring (updated the image)

I looked at the first game, and something doesn’t look right:

Anyway, below the score calculation for both counting methods.

Off board (central column):

Hey, as @SanDiego pointed out, you must have made some mistake in the first game, with the presented counts it makes no sense and those numbers of captured stones look way too high.

the second game (with chinese scoring) is not finished (esp with chinese scoring you need to fill neutral points as well) and thus is hard to count precisely (I dont even know whose turn it is now), but is simple to give approximate count.

In Chinese rules we count both the empty areas as well as the stones surrounding them as points. Captures have no effect on the result. Therefore at the moment:

EDIT: I decided to be so nice a make a full demo explanation of the situation here you go:
https://online-go.com/demo/view/268776 hope it makes Chinese rules clear. If not, try to specify where you got lost.