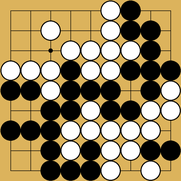 I was white in this game. During the scoring phase, it was impossible to mark the lower right as seki. Being unable to correctly score the game, I resigned instead.

I’m not really sure how territory counting works. Under area counting, live stones on the board are counted in addition to surrounded empty territory. However, I can’t figure out whether you count stones in a seki, which would make the difference here. I resigned under the assumption that stones in a seki aren’t counted, resulting in black + 7.5. If stones (but not territory) in a seki are counted, the result is white + 4.5. Which one is right?

where do you get that information?

You should not have resigned. You won by 7.5. White has 18.5 including komi. Black has 11. That point at G1 in the lower right counts as a point for you even though it is a seki.
In the future, in case of a seki, if your stones are marked dead you can click on them to mark them alive.

I see there might be some confusion here because different rulesets have different rules about counting territory in seki. However, stones in seki are never counted as dead, and in area counting they are included in the count.

A quick sanity check is that area and territory counting should produce roughly the same score. You obviously don’t count the stones in seki as captured under territory counting, and it should be easy to verify that in area counting you have to count those stones in order to get the results to agree. This isn’t an infallible method, but would help catch cases like this where you’re uncertain about a rule that would change the count by more than 10. Things like seki can cause differences in score between rulesets, but those differences are usually 1 or 2 points at most rather than 10 points.

In fact, I notice that this game is under AGA rules, so it would normally be counted by territory not area, although the two counting methods always produce identical results under AGA rules. I’m not entirely sure why the implementation is in area counting here, but I think it’s usually considered easier to code.

It’s not that complicated, you just don’t count that bit of territory for either player. The territory everywhere else is counted like normal.

Even if you lost… You both played every reasonable move possible it’s the end of the game now, why would you play until the very last move if you were just going to resign?

At this point in the game it would make more sense to just pass and go to scoring, you aren’t the only one that does this it’s just weird is all i’m saying.

I explained why in the opening post. We did pass and go to scoring, but the seki would not score correctly, so I resigned instead.

Thanks everyone for the help