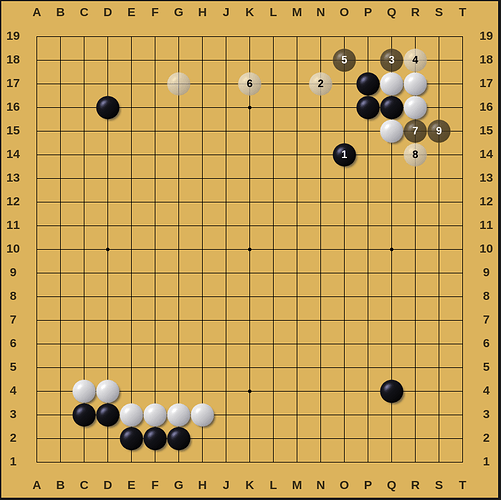 unsure870×867 59.6 KB
See how white is invading at the top? How does it know where to start? To me it feels like you can start anywhere and extend anywhere. But something tells me that isn’t so. Or is it? Where ever I put my first invading stone I always extend 1 space away from it to the center. So many options idk if anything matters.
1 Like
ɱekriff July 10, 2020, 5:58pm #2

I’m not sure I would classify the stones marked 2 and 6 as an invasion… it hardly feels like b has staked a claim at all. Usually we’d call moves like those up top “splitting moves”

Now you might say that the black stones at the top right make a wall, and they kind of do, but there are a couple things about this wall: 1) it’s weak, no base, not a whole lot of liberties, and 2 is kinda nasty against it. and 2) it seems more like those black stones (after 1 is played) are there for influence, which usually means trying to fight to get something out of it (in this case 7 and 9 to make w pay for 2 and 6). Influence is kind of weird in that it doesn’t usually seek to make a lot of territory where it is (except in the case of omoyo), but rather wants to make a fight profitable, usually getting territory elsewhere

Personally instead of 1 I’d extend along the side (say at L17) to have a move that both gives the right side group a base, and pincers the stone at G17

“how do you invade” is unfortunately not trivial to answer.

The most basic and simple answer I can give is…

You want to maximize the space your stones have.

This usually means you play so that you’re guaranteed to get a decent extension on either side, or you have enough space to run away to the centre. How you do this is different for every position and game state.

I used to have a problem with understanding why anyone would play a pincer, because it seemed like it just created two weak groups that are split by the opponent’s stone. (Still I played it all the time because it somehow worked.)

The best explanation I got (from NicelyManifest) was:

"A pincer is a fighting move. It denies the opponent a base. A pincer starts a fight."

That is the thing with the pincer. But the other thing is that the pincered stone will easily live. So it’s not as easy to understand as “3-3 takes the corner”. You need to see that the follow up to your opponent’s response to the pincer will be good for you in some way. A pincer is not always good.

There are also many josekis that result from pincers. I recommend watching Nick Sibicky’s “Joseki for Kyus” videos, starting from the beginning with the first one. They explain these josekis and how you punish deviations. The opponent may play anywhere, so you need to understand the mistakes as well as the correct path(s).