How to score a game 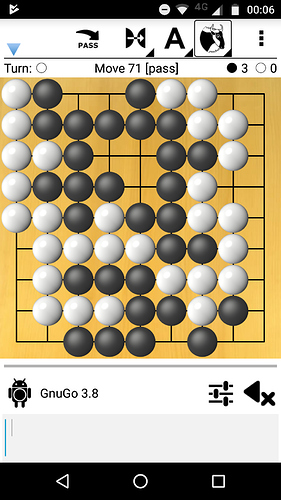 Hi, i am new in this go world.
Who won this Match? O believe black. ls it?
Thanks.

Thanks smurph. Can you describe how to score this game?

For an example of how Japanese pro’s do scoring, see for example the end of this video. I find scoring on a real board extremely satisfying for some reason.

The game itself is fun to watch too, there’s a huge capture by Shibano near the end, hence all the black stones he puts on the board during counting.

White won the match by a large margin, since the black group at the bottom is dead.

Counting the exact score depends on the rules. I believe @smurph counted with Japanese rules (territory scoring), so let me do a detailed count in Chinese rules (area scoring).

The 10 black stones in the bottom 3 lines of the board are all dead and are removed at the end of the game. If black disputes the death of these stones, the two players could play on, but a competent white player should be able to capture those stones.

After removing those 10 stones, black has 19 stones left on the board and 5 points of surrounded territory, for a total score of 24 points. White has 57 points (28 territory + 29 stones) on the board (not including komi). So, White has won by 33 points plus however much komi (compensation points) White was given.

but a competent white player should be able to capture those stones.

Actually, even for an incompetent player, the only way black might live, is if white keeps passing and let black capture one of the white groups.

Further, to explain how @smurph counted with the Japanese rules (territory scoring):

The death of the black group is handled the same way, it is first removed from the board before counting. However, these removed stones are added to white’s prisoner count. White’s score is territory (28) + prisoners (10), giving a total score of 38 (not including komi). Black has the 5 points of territory + 3 prisoners, giving him a total score of 8.

Realizing the bottom black stones are dead is maybe the important part and the source of the confusion (or maybe not?

) So not passing and playing the position further might be beneficial.

Black has no eyes. That is very important to see. the eye-ish shape (A and B) in the bottom are only a false eyes. https://senseis.xmp.net/?FalseEye and as a result of that the white stones are all comfortably alive. Black will never be able to capture them, just try…

I got beaten to the scoring, so ignore the rest of the scribbles 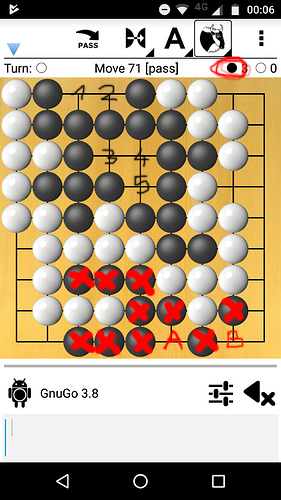 It takes time to learn to see FALSE EYES

The trick with surviving a false eye situation is that it’s like a capturing race - it often takes you that one extra move to make the 2nd eye, and if your opponent can take away your key points, your whole group is dead.

The trick to surviving these situations is to only play forcing moves. However, as in the situation above, you sometimes get painted into a corner and there are no moves left that will lead to survival. Knowing when to spot these situations ahead of time is important too, so you don’t throw good stones after bad.

That was all very useful answers.
Thanks a Lot!

Hi again.
Now i need help with this game.
I think black wins. What do you think? 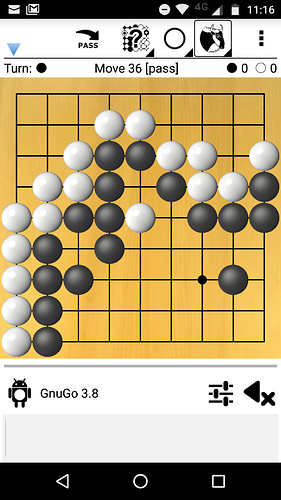 This is the way i have scored. Is it right? 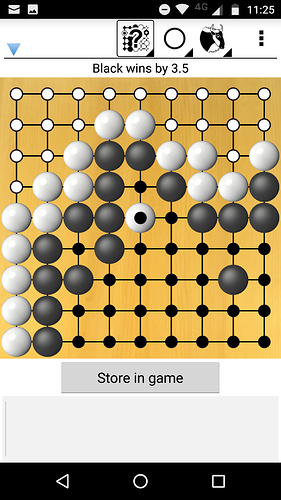 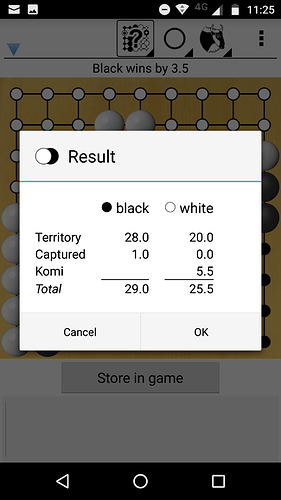 How can i do it?
EDIT

I know you didn’t ask for a review but, nicely done. It’s what I call an ‘Elbows game’ where each side has just one group and then they push and shove with their elbows. ^^

If I had been white I think I would have played move 8 at one of the cutting points; E6 or F5. Be wary of cutting points. Especially multiple ones and of course, be on the look out for opportunities to punish your opponent if he/she gets too careless with them.

For Black(you) the one missed opportunity that stands out is move 25 at A4. ‘Divide and conquer’ but you didn’t need that to win. I look forward to playing you on OGS sometime.

Thanks for the review Kosh.
I have to say in this game, wasnt played straight.
I’m learning playing with this app, gnugo, this way: i go back when i realize the move isnt appropiated. Sometimes i turn color to see what would the bot move in my position. It’s a way i found to learn.
Don’t know what is OGS. I Will try yo find it out.
Thanks again.

Don’t know what is OGS. I Will try yo find it out.

OGS is the Online Go Server whose forum you’re currently on. You already have an account, if you’re here.

Be careful with learning too much from GnuGo. It is not a particularly strong bot nowadays and can make some strange moves in particular situations, especially if you play on a mobile phone. If you like to try a stronger opponent I recommend taking a look at the free gridmaster app, which has the stronger bot steenvreter and additionally it has the option to download and play leela zero, which can play on professional level.