How to score. Directions needed

I’m trying hard to keep what I learn at a minimum, but my sister wants to play on my real-world goban and I’ll need to learn to count (insta kifu can only go on for so long).

Can someone offer some basic, simple guidelines about how to count points?

PLEASE keep this simple. I’m TPK and I don’t want to “improve fast”. Please answer with that in mind.

A bit longer but very simple, you can continue to play and fill all the territories… The one who ends with still some space wins

WHEN A GAME IS OVER:

Fill all neutral points with a stone of either color, just so they do not get in the way

(Assuming Japanese rules, which I recommend for the beginning)

The following point is not necessary, but you can try to rearrange the territories by moving stones around at the end so that it makes nice rectangles to help counting. You just have to pay attention to not move a stone from a player’s territory to another.

@AdamR, @Jhyn thank you both very much.

I’d like to take advantage of your helpfulness just a bit more and ask if there’s a video that you maybe know on the topic. YT algorithm is giving me general go content but it doesn’t give any results with “counting” or “score”, it just shows tutorials or matches. I suspect tons exist, but with non-English titles.

Could that work in a seki situation? I don’t want to teach her something wrong; even if I’m not willing to improve, she might want to, so accurate scoring would help her.

Well, I do not know about any perfect videos for the situation, but this one could be enough:

Miss Yin explains it very thoroughly, but unfortunately those are AGA rules. If you ignore their crazy passing rules (before my time mark) and change the komi to 6,5 instead of 7,5 it’s the same (I actually forgot to mention komi in the previous post

This is where almost all of the practical difficulty in IRL counting is. If you don’t have a local club to play at, and only go to tournaments every now and again, chances are you’ll never get the hang of doing this quickly. At least that’s how it is for me.

I disagree of course! The way of filling all is not that long in 9*9 and it gives a good understanding of the goal of the game. It introduces well the more sophisticated one later which come with the japanese rules.

You know I had to go back and watch that.

I just want to explain a bit about why AGA rules have these “crazy passing rules”.

The AGA rules use Area Scoring, while the Japanese rules use Territory Scoring.

Even though the score is counted in different ways, the difference between area vs territory scoring does not significantly alter the strategy of the game. For the vast majority of games, the result will be the same, and maybe differ by only one point at most. In determining the result, all that matters is the difference between the two player’s scores. When the players have both played and passed an equal number of times, the area and territory scores will be identical.

The AGA rules use the concept of “pass stones” and “white plays last” simply for counting convenience, in order to make the territory counting yield the area score. If one directly counts the area score (territory plus living stones), the “pass stones” and “white plays last” conventions are unnecessary. However, these conventions exist since some people find it more convenient to count prisoners (or fill in territory with prisoners) rather than count the living stones.

Some advocate for teaching only under the Japanese rules for beginners, however, I think there is a lot of benefit to teaching both the concepts of area scoring and territory scoring, and to recognize how they give nearly equivalent results. This allows one to see the objective of the game from different perspectives, which may be beneficial for beginners learning and understanding strategy, and I’ve discussed this previously here:

I agree with this point: However, I do not support the argument made here: I think there is value to teaching beginners about both area and territory scoring, and how they essentially give strategically equivalent objectives, for the sake of dispelling these illusions and misconceptions. Area scoring and territory scoring are really just two ways of looking at nearly the same thing, so maybe giving both perspectives would help a beginner better understand the objective of the game. Area sc…

I could go on further about how area scoring also simplifies the more complicated aspect of scoring, which is determining life and death at the end of the game, in comparison to Japanese rules, which has tons of minutia and technicalities that are confusing for even very experienced players.

However, I should stop, since I don’t want to derail this thread even more with rules pedantry. 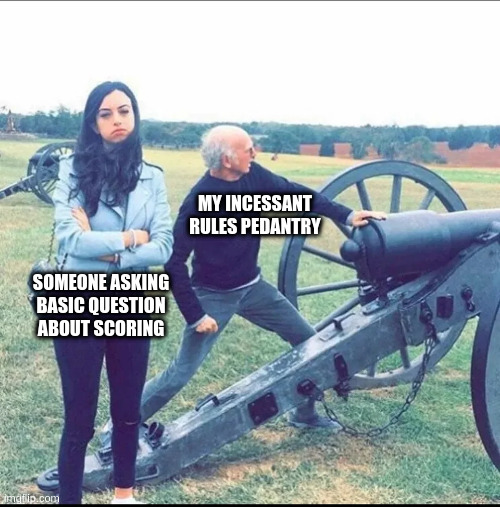 I should clarify that derailing bugs me a bit if it happens before the basic question is answered in a basic way.
After that point, further discussion (on-topic) doesn’t hurt anyone, it usually helps.

Since we are two irrelevant players (my sister and I I mean), does it make sense to play without saying before the game what the ruleset will be? Or even komi? The result was at a point where komi didn’t really make a difference.
I’m explaining as much as I can, but I prefer to emphasize on concepts like “you don’t have to kill everything” and “think bigger on the board” which were things I also couldn’t grasp and I see that she should work on.

Well, I don’t want to imply that anyone here is “irrelevant”. For casual teaching games, it’s okay to just play without having a firm agreement on the technical details of the rules, or even what the komi is. The technical differences between the various rules only really matter when pretty rare complexities arise.

How to "Teach" Go

Weekly Go Wednesday, Issue #45 Introduction Introducing go to new people is a topic that I’m very passionate about and it’s something that I think a lot of people mess up. To be fair, it’s not thei…

I’m calling myself that, and my blood relative, I think we are OK.

I wouldn’t go so far as to say I’m “teaching”. That’s an overstatement, really.

That article seems familiar, but I’ll re-read it, iirc I liked it. I’ll show it to her, too.

I say that just stick to japanese rules and counting, no need to make go more confusing by pondering the differences between different rulesets.

Komi is somewhat unnecessary outside serious tournament games between ~equally strong players. The whole purpose of komi is to nullify b’s (small) advantage of playing first, i dont think you should use it before your sister can challenge you in even game ^^

before your sister can challenge you in even game

She’s showing genuine interest, I’m hopeful I will get the bounty.

P.S. My mom watched us play and expressed interest to learn. I may have opened the floodgates.

That’s awesome. Maybe be careful if you rank much quicker, to not let it show, that’s sadly one the quickest way to spoil their interest.

With area scoring, you only need to manually count one player’s score, since the scores should add up to 361 (if playing on a 19x19 board) minus any unfilled dame. Technically (under Chinese rules, specifically), the unfilled dame points are also split as a half-point to each player, but that can be ignored without changing the result.

Note: some dame might have to be left unfilled for the sake of preserving seki. It’s also possible to leave an even number of inconsequential unfilled without affecting the result.

Before counting the score, the players should both agree which stones are dead and remove them from the board. If there is any disagreement, play should continue, and the burden of proof is put on the player claiming death, who must capture those stones to settle the dispute, and if they fail to do so, those stones would be considered alive.

To count one player’s score, you need to count their total area occupied (living stones + surrounded territory). First, count the territory, and you can use the same stone rearranging tricks mentioned above to form territory into rectangular regions to make for easier counting. However, you can also add and remove stones (of that player’s color) to make the territory counting more convenient. This does not affect the score, since when you reduce territory by one point, you are also adding a point by having another stone on the board, and vice versa. After counting the territory, count that player’s stones on the board (including the adjustments made during territory counting). These stones can be formed into groups of 10 or rearranged into rectangles to ease counting.

On small boards like 9x9, control over the board might wind up split in half, and one may only need to count along a diagonal or a center line to figure out the score difference.

I actually always teach beginners Chinese scoring. It makes a game marginally longer, but it is much easier to understand.
For beginners Japanese scoring is not at all easy because of your #3: dead stones on the board. Let them play those out.
You need to learn to reliably decide who is dead and who is not.