How to score this game? (Japanese rule discussion) 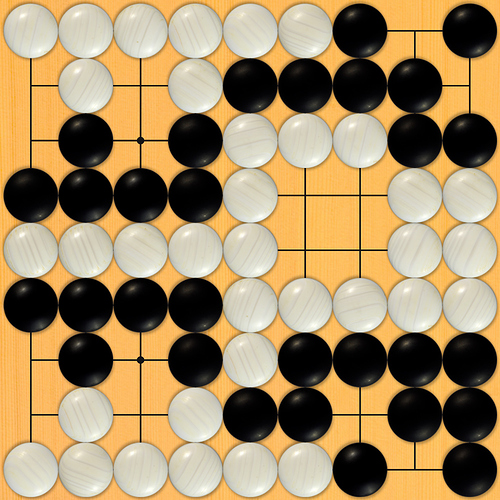 Also, I’d say that the players should not have passed as there’s still a 3 point move.

[Edit] Actually it’s more complicated than just a 3 point move. But we are scoring, so both players have already passed and agreed on the status of the groups, right

okay I think I need to go back there… third time this week!

What’s the score “on the board” then? We can always add prisoners + komi to that value later.

Also, I’d say that the players should not have passed as there’s still a 3 point move.

Interesting, what is that move?

so both players have already passed and agreed on the status of the groups, right

Let’s assume they both passed, but are still trying to figure out what is alive or dead. How should we advise them? Perhaps they ended the game too early?

Should white necessarily resign if we have not considered prisoners/komi yet?

I’m not really after an absolute score here, just interested in how to work out the status.

My analysis after re-re-reading the rules.

So after passing all groups are alive (cannot be proven dead) and the score on the board is 4-4. Adding komi and prisoners (estimated 5.5 + 5) that’s a large win for white.

Now black could request to resume the game… I think black could start a sequence to gain another 4 points (capture an eight-stone group and give away a six-stone group), which would get us to a 4 point advantage for black on the board (again, ignoring prisoners).

Ok, I should probably add some context. This contrived position comes from this obscure Sensei’s Library page: https://senseis.xmp.net/?SekiWithoutSharedLiberties and it is also referenced as an example of a Rules Beast.

Unfortunately, there is a disappointing lack of analysis on that page. I’m really quite dumbfounded by it, and am sincerely asking to hope to learn more.

However, I must admit that the initial post and choice of title was in the hope of catching some people off-guard in expecting some beginner seeking basic help for a simpler game.

Every time I see a post from you, “I” feel like a beginner who needs to learn the rules.

it is an unfinished game.
But if both passed, then we can assume that they both agreed the b and w at both top and bottom are seki. (which if they fought it out, probably aren’t).
And then if those are seki, then w in the middle is dead, because it can’t make two eyes
So I would say B wins.

I’m really quite dumbfounded by it, and am sincerely asking to hope to learn more.

And then if those are seki, then w in the middle is dead, because it can’t make two eyes

From the translate rules Article 7.2

There is an example in the commentary section clarifying it.

After both players passed:

White is dead as far as I can tell.
While the stones of the center group are on the board, the lower left and upper left live in seki.
For example W A3, B A2, White passes for A3, black captures with C2.

So black has time to fill up F5, F6, G5 and G6. The white stones die. Black now captures the remaining white stones.

The key is that white should first create two kos before passing. Then black can capture one of the groups, while white recaptures the ko for the other group.

However, one thing that is a bit unclear to me is whether the rules allow for the pass to be assigned to the ko after the fact. If white needs to declare that the pass is committed to a particular ko, then it does not work since black could choose to kill its corresponding group first. However, if white can simply say that retaking either of the kos is using the credit earned by making a pass then it works.

I’m not sure if the rules/commentary fully clarify this issue.

I’m not sure if the rules/commentary fully clarify this issue.

I think the commentary clarifies it. Go to

Approach-move ko with double-ko seki (example of capturing again after passing for that particular ko capture).

White 7 passes for the left ko, because recapturing without first passing is prohibited.

Black 8 captures two white stones on the left. White 9 and Black 10 pass for kos on the right.

If the pass would count in general for any ko, white wouldn’t have to pass a second time.
There is also a discussion about what would happen if white passes for the right ko first.

Thanks, that seems to provide clarity for the issue in question. However, I couldn’t find the part discussing what would happen if white passes for the right ko first.

Hence, it would appear that the entire example collapses. I think the original position was composed assuming that white could prove that his central position was alive during the confirmation phase, by illustrating that at least one of the black groups on the left could be captured. However, now that seems to not be the case, requiring white to capture one of the black groups during normal play.

I think the intended reasoning from the composer of the position was that each player prefers the other to initiate the throw-in’s to collapse the corner positions and exchange captures. The person initiating the sequence gives the other an additional prisoner. Black could compel white to begin the sequence by playing inside the block-4 eye, but that just gives white prisoners to compensate for initiating.

If the Japanese rules had been just a little bit different, then hypothetically the players could have waited until the confirmation phase to determine that one white group and one black group (in opposite corners) are dead, with neither player having to give up an additional prisoner to initiate the ko throw-ins.

However, since the rules seem to require one to declare which ko one is passing for, it appears that white cannot actually prove the capture in the confirmation phase and hence is compelled to initiate the sequence during the actual play.

The original author called this position a “seki without shared liberties”, however, even if we bend the Japanese rules to make the example work as he apparently intended, I don’t quite understand how it could be viewed as a “seki”-like position.

Every time I see a post from you, “I” feel like a beginner who needs to learn the rules.

The original author called this position a “seki without shared liberties”

This itself is a misnomer, as according to the rules you cannot have a seki if the group is not in contact with dame points.
btw this also addresses a point I saw in another thread: it is necessary to fill regular dame in Japanese rules, or else your group is considered seki and the intersections it surrounds do not count.

I think that @flovo has the correct reading, and my initial sequence does not work.

In this specific case, white could still invoke article 9.3 and ask to resume the game. Even with an additional 3 point loss, that would certainly result in a win for white (assuming 5.5 komi + 5 extra prisoners at the time of first pass).

I don’t have an english version, but this piece is written by a chemist and tells you how to make chocolate mousse using just dark chocolate and water! No eggs, no butter, no cream, no sugar added, just chemistry.

Black kills the entire board, regardless of any sensible komi/prisoner count.

Unless the game wasn’t in the scoring phase, in which case this wouldn’t be a rules problem.

Unless the game wasn’t in the scoring phase

@smurph I think you are missing the point I made in my previous post: being in the scoring phase doesn’t matter that much, as any player can invoke article 9.3 and move back to the playing phase. So black can prove he/she can kill the white groups, but that’s pointless if white decides to resume the game.