How to understand OGS rank?

I’ve been away for a while. Before I left, changes were afoot as to ranks. I thought, Good. Soon I will be able to know what my OGS rank is.

When I signed in a few minutes ago, I saw that I am 14 kyu. Then I want to my profile and saw that I am 15 kyu. What is this??? Is there no such thing as my OGS rank? Does it just depend on whom in OGS I ask?

This is a great place to play go, but why is it so hard for OGS to maintain a rank for each player?

I don’t think that you saw anywhere that you are 14k.

What you can see here is a summary of your rank and some extra information about it: 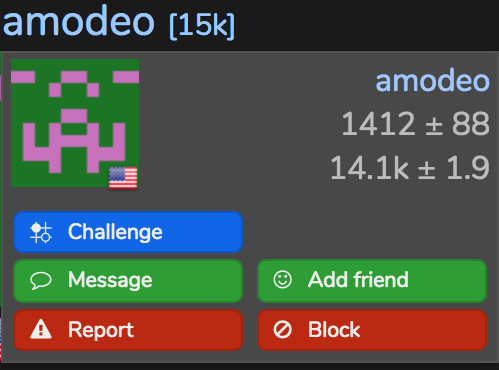 The extra information is that what OGS knows is that there is moderate uncertainty about this number: based on your record, your rank is centered around just over 14k, and with an uncertainty of 1.9k.

This tells you that

That’s a lot of detailed information about your performance record.

But it’s more info than you want, just run with the integer rank shown next to your name.

(Note - you won a game almost immediately after I posted, and now you are 14k, congratulations !

… also, if you are interested in all this info, and how it got that way, it seems clear in your record: 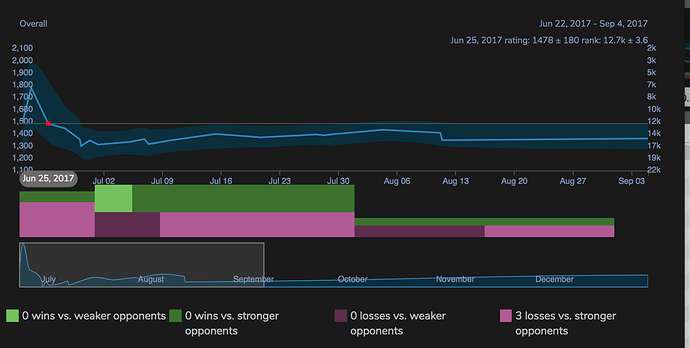 The first few games you played were all against people much higher ranked than you. This resulted in a large uncertainty in what your actual rank is based on those games: you can see that after a few games your uncertainty was +/- 3.6k, which is huge uncertainty. You also managed, in your very first game here, to beat a high ranking player, but then went on to loose a bunch to higher ranking players, and didn’t play any lower ranking players. That makes it very hard to figure your rank - but you can see that the losses caused it to plummet.

If you are concerned to have an accurate rank, it is actually important to play up and down: if you always loose, or always win, it is hard to tell what rank you are.

By the way, how did you get the image into your text? I tried to show the two images that were showing different ranks for me, but all I got was a note that I was trying to put an image there.

By the way, how did you get the image into your text?

When I click it, it prompts me for the file to upload.

Thanks again. When I started playing here my OGS rank was (and still is) considerably higher than my KGS rank, so I thought I could get reasonably even games by playing opponents with a higher OGS rank, but soon I understood that most of those people are really stronger than I am. Now when I ask for a game, I set the range of opponent’s ranks between several ranks lower and several ranks higher than mine.

How can you tell from that chart how uncertain my rating is? Is it the width of that light blue thing? It doesn’t look to me like it is getting much thinner.

The exact uncertainty at the red dot on the graph is shown in little text on the top right of the graph.

It is represented by the light blue zone, but the vertical scale is currently kinda small, so changes of that nature are de-emphasised (something personally I think should be fixed, so it’s like it was in the old system - vertical changes were much clearer in the old graph).

You may not know, but you can select which part of your timeline to display by dragging on the bottom part of the graph (below the coloured bars)

If you look at the period where your uncertaintly did come down (July/Aug), you can see the effect:

… see how fat the blue bar was when your uncertainty was over +/- 4k, at the beginning.

The uncertaintly settled to about +/- 2, which seems to be the normal value. When you think about it this is a realistic sort of uncertainty - my own rank certainly wobbles around +/- 2k when it plateaus.

15
.
.
. < you between these two ranges
14
OGS doesn’t round up or down, it just gives you the lower once until are 14.0k or under and so on. ex. 13.2k would be within recorded as 14k until you reach a integer. So in other words OGS does not support rational numbers in its overall rating. It might be that they think it would be bad for matching opponents ex. 3.9k falls out of the option for being an opponent or maybe its a stylistics choice to conform with rating norms. It would be considerably helpful to match with someone that is also 14.1k or 14.13k for a more evenly match game rather than playing with a 5+7 loss to win rate for a player. you must also consider 10.0 being used to specify open game challenge ranges being problematic implementing.