I haven't played for more than 30 years

…so I am a bit rusty, to put it mildly. Anyway, just played a game, got off to a bad start but then it turned around and I captured a large group, at which point my opponent resigned.

I leaned to play at Cambridge Uni ( UK ), then played a few years after that, then stopped.

I have also been watching some youtube videos by Michael Redmond, which are great

[ Oh, I played the computer as couple of times first, but it seemed a bit clueless about life and death! ] 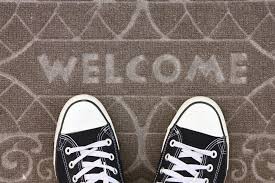 Haha, I just played a load of games against a stronger version of the computer ( just realised you can select that ), I kept in resigning in disgust at making mistakes in the fighting, then eventually I was more careful and won a game by over 200 points!

It’s rather sneaky, it makes moves where there is no point, except if I fail to answer correctly.

Welcome back to play go!

It’s rather sneaky, it makes moves where there is no point, except if I fail to answer correctly.

That’s a good reason to not play this kind of bots and find some human opponents. Getting inspired by this way of playing won’t guide you very far.

Have I played honestly (not expecting my opponent to blunder)?

[ Oh, I played the computer as couple of times first, but it seemed a bit clueless about life and death! ]

Welcome back to the game

I love the double meaning of your sentence

I love the double meaning of your sentence

No double meaning intended, it just seems the bot level I am playing doesn’t understand a group needs two eyes to live. It also has a habit of making lots of meaningless moves, for example playing extra stones where it already has solid territory which cannot be invaded. It’s certainly not the amazing AI program I have been reading about. When I learned GO around 1980 we didn’t have computer programs that could play it at all.

I have no idea of my current strength - I was about 3 dan then ( amateur UK rank ). My style tended to be to win by winning a big fight if my opponent was careless, and that still seems to be the case. I rarely seem to have a game where the score is close at the end.

I did a load of the beginner exercises yesterday, mostly I found them easy, but some I just could not see the answer for ages. I had to re-learn about snap-backs ( assuming I ever learned about them all those years ago - I’m not sure they come into practical play all that often ).

I have no idea of my current strength

Don’t worry, you will find out soon.

Hello George, nice to have you on board! I am sure you will soon gain all your strength back.
Have fun!

What a great time you chose to come back to such a lovely hobby!
In the last few years, the lessons we learned from the new super-human bots have slowly settled in the amateur community. It’s a new style of Go.

There is definitely a “rank shift” over time going on. What used to be “dan strength” way back when is now single-digit kyu. Please be assured that rank is just a number anyway.

If you’re interested in the AlphaGo games that overturned human domination, I recommend the book Invisible: The Games of AlphaGo by Finnish professional Antti Törmänen.

If you like video format, you may enjoy the YouTube channel of the American Go Association. In their playlists, they have professional live commentary on AlphaGo vs Lee Sedol, and other interesting commentary like the AlphaGo self-play series.

I am sure you will soon gain all your strength back

I very much doubt it, but on the other hand maybe I can make up for a more worn-out brain with the experience and wisdom that comes with age. I really don’t know.

Well, the playstyle of a player it’s said to reflect his personality. So maybe reading play sequences won’t be as easy as 30 years ago but i am certain wisdom and correct judgement can make up for this.

I leaned to play at Cambridge Uni ( UK ), then played a few years after that, then stopped.

Welcome back George… you are not alone here. A lot of us followed a similar path. You will discover how much it changed in the past 30 years the style of playing Go (even before AI advent).

It’s certainly not the amazing AI program I have been reading about.

If you want to get thrashed challenge a bot account running katago, leela, golaxy etc.

For example https://online-go.com/player/683279/JBXKataBot seems pretty strong (I could be wrong, technically 1kyu and 2kyu players have beaten it, but they could also have been using bots? Not clear to me.)

You too can have a winrate graph looking like this 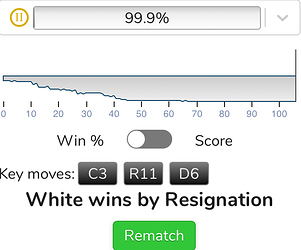