I honestly don't understand why I won this game 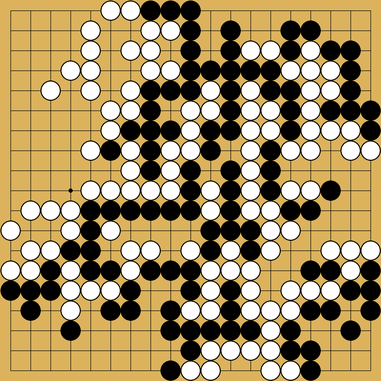 This game was with a friend of mine, the mistake I made at the beginning is game-deciding enough in my opinion. And throughout the game I have a feeling that he’s kept his lead well. But in the end I actually won with a good lead.

I think w12 is a slight mistake and w16 is terrible. But after looking back I think w8 is already not a good choice, should I choose another move? I really hate tengen move fuseki and don’t know how to handle it well.

I also think the whole fight around M17 group is meaningless, because it can make 2 eyes at anytime, so I was only creating 2 weak floating groups pointing at black enormous influence.

Near the end he managed to remove the aji for his lower right group, and later captured my L9 stones smoothly, removing all aji I have for my dead groups in the lower left. P17 is also huge.

Honestly I still believe until the end that I was loosing.

Could someone give me a review on bad move we (both black and white) did, and give some lesson on evaluating board situation? At which point did I reverse the game? What was black’s mistake that allow me to do so?

I agree that 16 feels like a poor choice under those circumstances. White regained the lead at 66, but 80 and 82 were bad mistakes. White didn’t quite recover until 136, where a succession of inferior moves by black allowed white to earn the few points that decided the game.