I lost a quick-chat slot!

I’m not entirely clear what that demo is supposed to show*, but it appears to be asserting that if you mess around with the actual source code of the page you can cause it to crash.

If anyone is interested, this is how you can reproduce the bug I found:
(crash from messing around in dev console)

What I pointed out that calling a “crash induced by messing around with the dev console” as a “bug” is not valid.

This appeared to put you on the defensive. I’m sorry if you took it as an insult, it wasn’t intended that way.

It always strikes me as odd being asked to “please make an effort” when I think that demonstrably I’m the person who does make an effort, and actually fixes these things where it’s possible. I presume that’s why I was “invoked” in this thread in the first place. So maybe you could cut me some slack in consideration of that eh, if I happen to inadvertently offend you every now and then while navigating the red-herrings in the description of what you want fixed.

This seems fairly simple to me.

That’s not a bug. That’s PEBKAC. 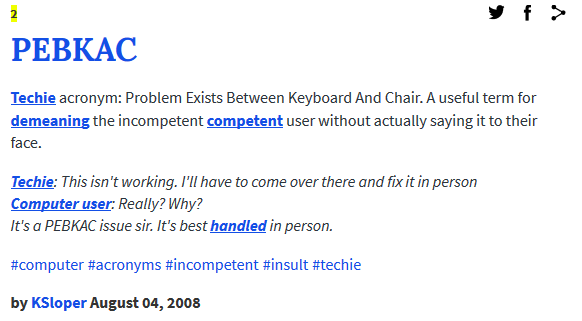 No demeaning was intended. I was simply asserting in a way that was intended to be humorous, that it is user error to think that a crash induced by manipulating the source code is a “bug”.

Now, the original problem does appear to be a bug, so perhaps we should turn our attention back to that…

Now, the original problem does appear to be a bug, so perhaps we should turn our attention back to that…

No, I think this line of conversation is more productive.

I feel that you have a habit of treating people poorly when they have issues with the site. Often you speak to them in demeaning and dismissive ways. Your intention has little effect on how these interactions are perceived. If someone feels insulted by something that’s the end of the story. Making excuses for why they shouldn’t feel insulted doesn’t change the fact that they feel insulted. I feel this current interaction is a perfect example of this.

Like it or not Green, you are a prominent member of this community. The way you treat people here has an effect. I don’t really care if any of the above issues with the app get addressed. I would prefer that you treat myself and others with more respect going forward.

But hey, since we both like humor here’s a bit that I think applies.
Louie C.K. - Self Awareness

Have a good day @GreenAsJade!

Ah, shit. All right. What happened? How did I get here?

Ayayay, how did we get here indeed?

and then forced OP to sort of “cheat” the way out of our own mistake… My appologies!

So yeah, the original problem is clearly a bug on our side, I think we can agree on that, and thanks again for bringing that up

First off, @MystWalker do I get that correctly that you are now back to five again?

I will file the bug report about the original problem, the rest was indeed a misunderstanding and GaJ was right to not call THAT a bug. I basically asked you to cheat and poke and the whole crash was my “doing” and something a normal user cannot encounter

and it is unfair to call him out on that as he was technically right and furthermore does wonders for our site and code.

And hey, even if do get a little defensive about OGS sometimes (and we probably do), do tell us, but be gentle. OGS is our baby

Can I have more than five slots?

No, as far as I know you cannot at the moment, sorry. (missed the question earlier)

I cracked a disrespectful joke about something that happened “on the side” of the main thread of discussion, instead of focussing on the real problem immediately. That was bound to get someone offside.

It’s possibly worth noting (for anyone reading along but not clicking on the link) that the question (“What happened, how I get here”) is rhetorical really - it’s the last line of the comedy sketch that the OP linked to, and basically says “I hear that you’re finding my behaviour obnoxious, and I’m taking it on board”

It’s great that it appears (from the like) that the OP took it that way.

I’ll take a look at the original problem when I get a chance.

How did I get here?

It was clear from the start that the OP was tech savvy. Do it at your own risk when you pebcak a techie!

@MystWalker do I get that correctly that you are now back to five again?

Yes @AdamR, I now have my 5 working slots.

…it is unfair to call him out on that…

I’m going to have to disagree.
Now, I did call out GreenAsJade. I’m not going to belabor the point, because I think things have been resolved positively and I don’t want to change that, but I feel I must be clear: I called Green out because he insulted me, and this is not the first time he has insulted someone on this board. Whatever the other circumstances, I wanted to address this issue directly.
To their credit, Green seems to be taking this criticism on, and I do appreciate it.

As to the conversation around what is or isn’t a bug, I’m just going to repeat myself.

The app called it a bug, so I’m calling it a bug.

However, I think it’s important to say ‘bug’ isn’t a four letter word to me. Just because someone finds an oddity in an application, that doesn’t imply any fault in that App or the people who work on it (Believe me, I KNOW). Considering (I assume) that OGS doesn’t have any paid QA staff, it’s a testament to the work you’ve all put in that people care enough to report bugs.

They care because you made a good app! And I hope you all realize that.

It would have been better to finish this conversation on a positive note without dissecting and belabouring it, which we now are doing - regrettable.

At the point where I took it on the chin that my earlier comment was obnoxious, it should have been left there (how often does a person even get that far!).

It’s a shame we could not have left well alone at that point. This thread is not at all the appropriate place for raising anyone’s broader issues with me being “an insulting person” (or issues with anyone for that matter).

Now I feel forced to point out that this self-righteous “the app said it is a bug” business is wrong - which is all that I actually said in the first place, albeit rudely.

The message “congratulations you found a bug” does not come from the app, it comes from the framework around the app. You managed to trick it into thinking that there’s a bug by editing a DOM element underneath the app while it wasn’t looking - something no user should be doing.

It’s a bit like pulling a spark plug off the distributor then complaining that the car doesn’t run properly.

I have no idea why you think that editing the list while the window is not in edit mode would be a good thing to do. Even if it might be a good thing - even if you’re a mechanic - when something goes wrong as a result it doesn’t make it a bug that we need to look into.

That’s why I pointed out that the problem was not with the app but with the person using it in the wrong way. It’s a shame that comes across as an insult - it’s really just pointing out that it appears you don’t know what you are doing. It came across from me as being testy and rude not because I’m defensive about bugs, but because I’m defensive about wasting time chasing user-induced red-herring bug reports.

It is unfortunate that I have been compelled to point this out “defensively”, but if you’re going to get all self-righteous after securing an apology in public then you too need to look at the video and look in the mirror.

You make fair points. I could have explained myself better, and I owe you an apology. Let me try again.

I agree, my use of the word bug in this context is not correct. Since we don’t share the same definitions, please allow me to make up a word to help me illustrate my miscommunication. Chaotic Shiny suggests: Thalmr.

In the course of trying to reverse a bug, I happened to find a Thaimr. I found this amusing, and thought I would share it. However, I thoughtlessly called this Thaimr a bug. This rightly caused some confusion and drama. I doubled down on this mistake by trying to excuse it because the app (or app adjacent system) was also confused (due to my mucking) and labeled the Thaimr as a bug.

In closing, I sincerely apologize for calling the Thaimr a bug. I never intended to assign fault to the Application or anyone who worked on it. I also apologize for excusing this mistake by referencing the error message, without acknowledging my mistake.

Thank you to @AdamR and @GreenAsJade for working through this conflict with kindness and decorum.

I love this place for many reasons, one of them being the reasonable and generally decent people in it. Sometimes I’m even one of those

The bug has a fix submitted, just waiting for review and incorporation.