I thought I won my first human game ever. Help needed to understand

I’m new to this forum, and to Go in general. Every year, for the past 4 years, I’m learning Go, watching videos, playing AI, but get discouraged because I feel like I have no clue what I’m doing when facing and empty board. After a few pointers like trying to stay connected, and trying to take smaller territories, I was tempted to play my first game against a human. I was still clueless, but I thought I did well (for my experience) and at the end, I thought I won but according to the scoring system, I didn’t.

Seems like the bottom right corner was white and I don’t understand why. I thought It was mine (black). Anyone kind enough to help me understand this part ?

hahahah, I was so nervous to do my first post that I forgot the link. Thanks for the reminder : https://online-go.com/game/8339261

I created a short review which should help you understand I think. Problem is that the lower right group is in ko for life state (neither alive nor dead) and thus the scoring system didn’t know what to do with it. You should have played out the ko, before passing. EDIT: In case the review shows up blank for you, that’s some new bug, which is starting to drive me crazy

here is a quick link to read up on ko: http://senseis.xmp.net/?Ko
basically if you look closely, white can capture the J1 stone and threaten the whole group.

Short answer: It was an unresolved ko situation during scoring. technically we do not know who owns the corner. Therefore the scoring process was premature – the ko fight should have been finished first before scoring.

The Ko rule is perhaps one of the most confusing thing for a beginner to learn. Have no fear, Issho is here.

What is Ko?
I’m a visual learner, so I produced some explanations in my trusty QiPan editor. Excuse the shameless self promotion

Ko fight happens when a stone can be captured back and forth:

If you imagine this kind of situation happening at a critical area on the board, neither players are willing to give up the stone. Then the problem becomes: WHEN WILL THIS EVER END??!

Here’s where the Ko rule comes in. Essentially after one player has captured the stone in the centre, the other player cannot capture immediately. He has to play elsewhere first for his next turn, before recapturing (if it is still available).

This gif illustrate everything (ignore black and white dots):

See how both players had to play elsewhere for the ‘recapture’ to continue? Either player may choose to end the ko fight by filling in the gap to prevent capture. That essentially ends a ko fight.

I’m not going to go in depth about ko threats, but just know this: You have 1 move to play elsewhere. If you want to makes this fight continue, make that move count. Play somewhere that your opponent feel like he has to respond to, instead of filling in this gap. That’s the essence of a ko fight. (Again, extremely simplified).

Ko can happen around the edge of the board too:
In your case, this is the kind of ko you will face:

Put into the context of your own game. The three triangled area marks the stage of your unresolved ko fight: 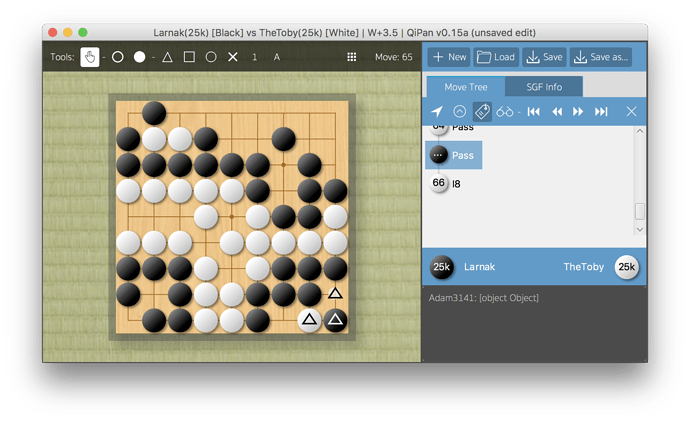 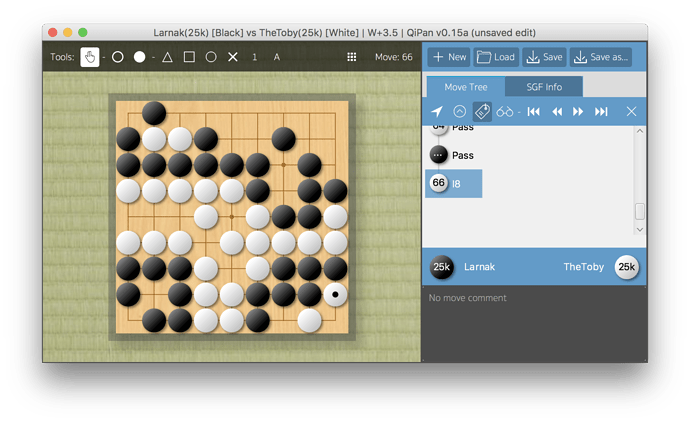 Black is in tough waters. There are no ko threats to continue this ko fight. I am not going to try to confuse you with ‘what is a ko threat’ (I’ll kindly refer to @Adam3141’s link to sensei’s library page.) I just want to show you how the board situation might end up if either side wins the ko:

White just needs 1 more move to kill black stones (marked with a circle). If black cannot cause enough ruckus on the board to distract white from doing so (which is most likely what will happen) then black will lose all those stones. 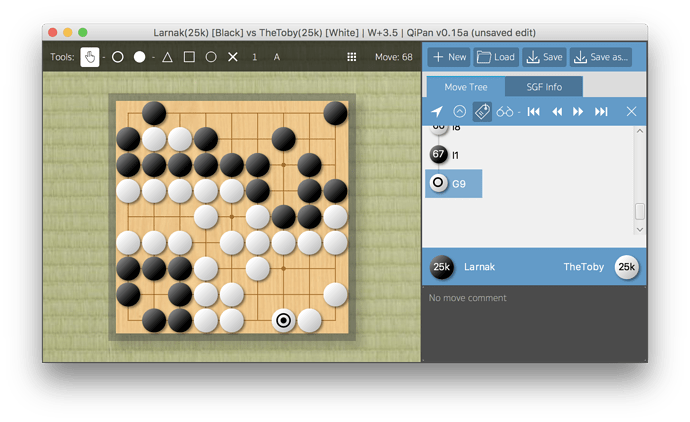 This is tough for black since black needs to kill two white stones to settle his position. If black wins the ko, then black will have a living corner with two eyes: 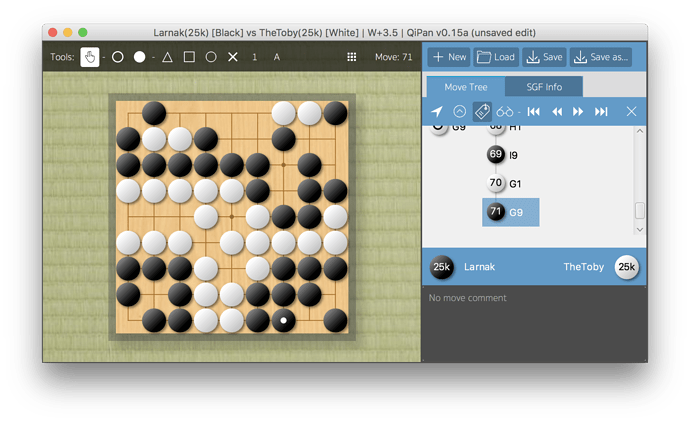 So did you win or lose the game? It’s the Shrödinger cat problem. The ko fight is an uncertainty, you could win or you could lose, depending on the outcome of this fight. Until then, consider yourself won and lost at the same time? XD

P.S. Black won’t have enough ko threats in the endgame. Likely white has won the game 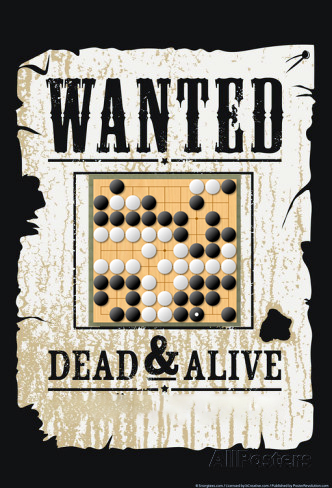 Everyone here has really good answers. Just to give you a quick rule of thumb.

They shape you had was called “Bent 4 in the Corner.” Under Japanese Rules, (which is what most of OGS plays on), this is considered a dead shape.

(It’s really just the first part of the video, so don’t worry, you won’t be watching for over an hour.)

They shape you had was called “Bent 4 in the Corner.” Under Japanese Rules, (which is what most of OGS plays on), this is considered a dead shape.

I am sorry, but I think this is extremely misleading to a beginner. This shape is not dead, only leads to a ko and only if all (or all but one) outside liberties are taken. The bent four presumed dead by japanese rules is a slightly different shape. (As far as I know as always…)

“Under the Japanese rules, the bent four in the corner is always dead as a rule.”

Well, yes and no.
Notice that the first two pictures are marked as topic diagrams and the third picture (which is the shape that occured in the game) is only a reference diagram. That is the resulting shape that will occur when the first two positions are played out. Those cases (first two pictures) are considered dead, because it is only black who can start the ko. If white tries to start something he just dies. Thus black can wait untill the end of the game when there are no more ko threats and kill it after. (Not considering unremovable ko-threats, which are special case).

All of these shapes are sometimes called bent four, so it is very confusing, I agree. But the third shape on the page you shared is not dead (yet). If it is whites turn he can just live. If it is black’s turn, he can start a ko. It cannot be presumed dead if white can live with one move…

all you really need to understand is that there is ko there. We just like to get technical sometimes

all you really need to understand is that there is ko there. We just like to get technical sometimes

So sorry for any confusion.

it’s really the fault of the name. Nowadays people are calling everything bent four…

I was scared I would get some “It’s obvious”, or some “bad play” or something.

I’m so appreciating the fact that everyone is so helpful and answer so generously to my question.

I’m also glad it was not that obvious. I have a lot to read now hahahaha.

Thank you so much.