I want to have a cloth bag set of Go

I can’t find the picture of this, but I saw one that had a game of Go on what looked like a sack cloth bag. I think this is an ingenious idea, and would love to have one! It seems like such a portable set to have, the whole set would be three bags and the stones. I could have that in the car or backpack at all times and could have a game anywhere!

Has anyone seen where you could buy a set like this?

It also seems like something that would be really simple to make! I may try to do that.
A question to any seamstresses out there, does anyone know how to make simple draw-string bags? What materials would you make your bag out of if you could?

As for making them, it depends on what the shape of the bag should be. Most simple is probably to take a circle-shaped cloth and fold + sow the rim over the string (such that the string is inside a tube), then it will have that archetypical coin purse shape. If you make the pouch from strong material you can also sow the string itself along the rim, such as in this picture: 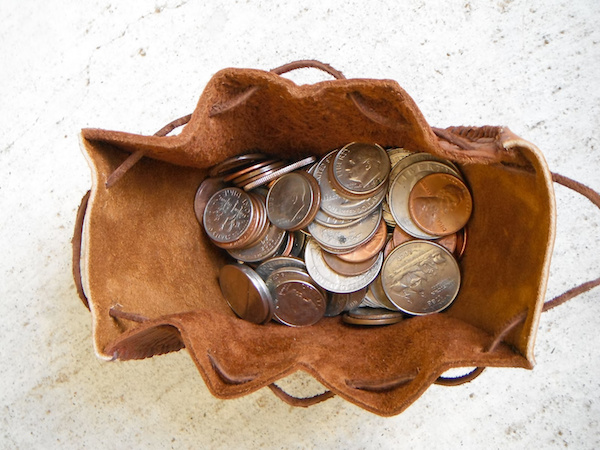 Ah, I see I did not speak clearly. The idea of this design is that the largest bag is the Go board. In this way the entire set is made of cloth and stone.

The idea of a cloth circle isn’t bad, but it would have to be possible to completely open it, so I can lay flat. (Figure B)

The way I had in mind would have the main bag be square and have a draw-string on one side. (Figure A)

I’ve made a drawing to make it more clear: 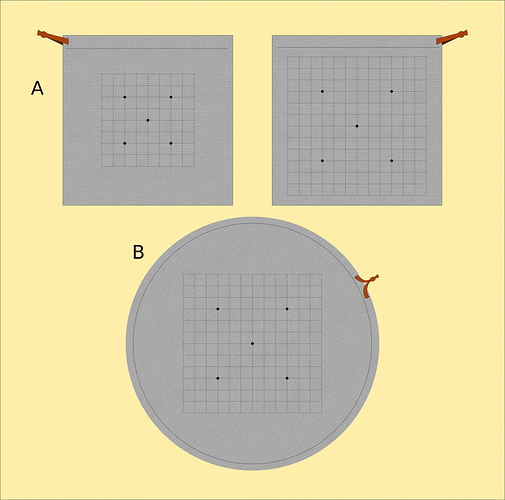 My first set was a large cloth with the grid drawn on it, and two crown royal bags for the stones.

This looks much nicer =)

Cool! Got a picture?

Do you intend to make it a flannel bag & felt stones so the “stones” stick a bit to the “board”?

No, sorry. I gave it away after I built my wood floor goban.

after I built my wood floor goban.

Cool! Got a picture?

No, I’d like to have regular stones. However, that is an innovative idea! You could have velcro stones so that you could play in almost any environment and be able to pause the game in an instant to continue later.
You could play on a lap on the subway, get up to catch your next train, and continue playing while standing, all seamlessly.

Plenty of pictures in this thread =)

Today is the big day. My new goban gets to come back inside the house now that all the finish is dry. I used an oil-based polyurethane to seal it up. [20180306_105408] [20180306_105345] Personally I find the polyurethane to be offensive (basically cause the poly is a thin plastic coating on top of my beautiful wood) and I generally prefer a wiping varnish that penetrates but leaves the surface feeling like real wood. The reason I went with polyurethane is because it offers superior protectio…