I want to play

I wanted to try this kind of Chinese checkers because my buddy told me it’s fun. I tried to get a game twice, but it ran for about 5 minutes and a game never started. Can anyone tell me a better website to try? I guess there aren’t many people to play.

Welcome to the OGS forums!

If you create a custom game it sometimes gets picked up faster. Title it “Chinese Checkers” for good measure!

If automatch doesn’t work, you can try to accept any of the custom challenges that are visible below the automatch buttons (aim for players between 25k and 15k for beginners)

Or you could play against the computer, they’ll accept automatically.

Or ask your buddy to play with you? That sounds like the best option overall anyways.

ask your buddy to play with you? That sounds like the best option overall anyways

Learning from a friend is definitely the best way!

I wanted to try this kind of Chinese checkers

This puzzles me. As far as I know Chinese checkers and go don’t have much in common.

Sternhalma, commonly known as Chinese checkers (US and Canadian spelling) or Chinese chequers (UK spelling), is a strategy board game of German origin which can be played by two, three, four, or six people, playing individually or with partners. The game is a modern and simplified variation of the game Halma. The objective is to be first to race all of one's pieces across the hexagram-shaped board into "home"—the corner of the star opposite one's starting corner—using single-step moves or moves ... 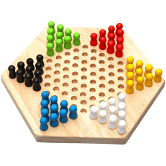 This puzzles me. As far as I know Chinese checkers and go don’t have much in common.

Chinese checker doesn’t even have much to do with China but Germany.

Indeed German, I didn’t know that. But note that the German name for it is Sternhalma (usually just: Halma). Naming it ‘Chinese’ was an American invention for marketing reasons. Seems that China is the only country not at all involved in this.

Apparently from A. Greek ἅλμα, a jump.

As vaguely neoclassical a title as Ludo (Latin lúdo, “I play a game”).