I won a game and my rating went down 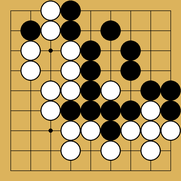 I received a ladder challenge from a much weaker player, which is fine, it’s what the ladder is for - you can challenge whoever you like and get an even rated game. But after I won… my rating decreased by a point from 1029 to 1028.

This is obviously no big deal, but it does feel like a bug.

Yeah this is a known issue that’s been happening… I’m still trying to track it down but I’ll correct you up by one point.

So you won a game as “9k” (most of your games are bot games so who knows) against an absolute beginner and you expect to receive points for that? You should be ashamed of yourself.

You also lost an almost equal 19x19 game recently, which took you from 8k to 9k. Then you played a 13x against a bot - as you do frequently, and an unranked nonsense game.

Hello, From the docs people helpfully linked: http://www.glicko.net/glicko/glicko2.pdf The Glicko-2 system works best when the number of games in a rating period is moderate to large, say an average of at least 10-15 games per player in a rating period. The length of time for a rating period is at the discretion of the administrator. Following on my previous post, I was hoping that someone could say what the ratings period for OGS is. (Strangely, details of the Glicko math used were entirel…

Please be civil. There is nothing wrong with having computer opponents or playing unranked games. These criticisms are not relevant to Yujiri’s issue and come across as needlessly harsh.

Back to the issue, all I can tell from the rating graph is that the day started at 1727 and ended at 1706. In this time, Yujiri lost to 7k, and beat a “?” in their first game. (I think bot games don’t affect player rating?) The rating drop seems accurate for this situation, but there could be a bug. It also might be from the “?” player losing two games after Yujiri’s. The way Glicko works (if I understand correctly) is that past ratings are adjusted based on opponents’ subsequent performance. So an initial score of 1712 could be adjusted downward a few points to reflect that worse-than-expected performance from that player.