The idea ive had is an aide to studying go. I personally have a go board, i dont get much use out of it for a combination of reasons… including the fact that im unorganised as hell and dont haveany go playing friends.

So my idea, the idea is to have an easy way of opening up a completely black board so you can effectivly play yourself, save variations, use as a studying tool to replay old games on.

Now i know this sounds a lot like a reveiw like the option of reveiwing a game on OGS, however… there is no easy way of getting in to a reveiw like screen without actually doing a game reveiw.

So a button that takes you to a reveiw like place would be great. As well as an option to save games that you have had as well as a way to look at older kifu of other players such as pros as long as we can reasonably provide a link to the game in another place or something. But to be honest id be happy with just having a place to reveiw without actually having to reveiw a spesific game.

I assume you mean “completely blank”.

What you’re looking for is the demo board; you’ll find it the menu bar on the left-hand side of the page display. 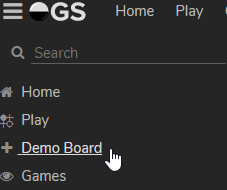 But thank you both this will be immensly helpful.

) Some things just work better out of a browser…

I personally use Drago for open-board stuff, and for doing things with SGF files.