Played one game against Fuego but something unexpected happened at move 357 (final move). I’m almost certain white should be allowed to play at L1 but was unable to due to the “illegal Board Repetition” error.

I don’t see how it’s repeating any board patterns if white plays L1? 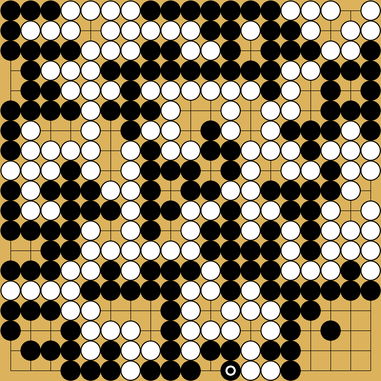 It would revert to position at move 352

I must say it would have tricked me too.

Interesting. So it’s some special repetition property that I was previously unaware of. I thought the no repetition rule applies to only kos or the last 2 board states. Well you learn something new everyday

is there such a rule? that any PREVIOUS board position is not allowed, and not just the position immediately before (KO).

Under Chinese rules you are not allowed to recreate a previous board position. Under Japanese rules the game is void. I think!

Under Chinese rules you are not allowed to recreate a previous board position. Under Japanese rules the game is void. I think!

game is void only if it results in a 3 way KO sort of stuff. in OP’s game he probably won’t make the same mistake twice.